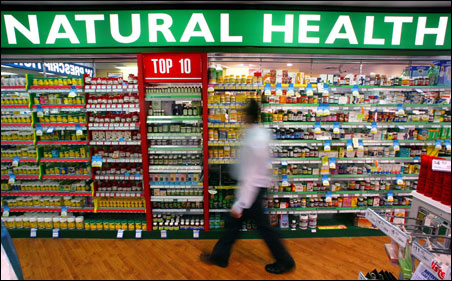 REUTERS/David Gray
The U.S. Food and Drug Administration lacks the authority to approve prospective supplements for safety or effectiveness.

As Rep. Michele Bachmann may have realized too late last week, an anecdotal story is not the same as medical evidence.

Still, I read with interest and some amusement Time reporter John Cloud’s recent tale about what happened to his health when he took 22 vitamin and mineral supplements (as well as protein bars, powder drinks and “enough psyllium fiber to regulate an elephant”) daily for five months.

What happened was, well … pretty much nothing. Blood tests taken at the end of the five months showed that little had changed in regard to his body’s levels of calcium, protein, sodium, cholesterol and two-dozen or so other substances.

Only two values were altered significantly. One was a 75 percent increase in the amount of vitamin D in his blood. That jump may have been caused by the vitamin D3 supplement he was taking, Cloud deduced, or by the fact that the second blood test was done in June, when he was spending more time outdoors. (Sunlight-on-skin is a major source of vitamin D.)

But did Cloud even need that extra vitamin D? Not according to the 14-member expert committee of the Institute of Medicine, a nonprofit scientific group that was commissioned last year by the governments of the United States and Canada to analyze existing studies about vitamin D and determine the amount that’s optimal for most people’s health. The committee concluded that a healthy vitamin D level is 20 to 30 nannograms per milliliter (ng/ml) — a level, the committee also pointed out, that the vast majority of us achieve without taking any supplements.

Cloud’s vitamin D level was a healthy 28 ng/ml before he went on his supplement binge.

The other change that showed up in Cloud’s post-supplement-taking blood test was a rise in his high-density lipoprotein (HDL) cholesterol (the “good” one). It went from 61 mg/dl to 89 mg/dl — a 46 percent increase.

His personal physician speculated that that HDL rise might be due to the 2,000 mg of fish-oil concentrate that had become part of his daily pill-popping regimen.

Higher HDL levels are considered good for the heart, of course. But should people be taking supplements to raise their HDL levels? Cloud talked about this issue with Dr. Eduardo Marban, director of the Cedars-Sinai Heart Institute:

[He] has found that extreme doses of antioxidants can cause genetic mutations in stem cells. He says he virtually never recommends supplements. “I think a normal diet would suffice in every case that I know if,” he told me. “And I’m worried about the little old lady who takes 20 vitamin pills a day.”

Cloud did experience one unanticipated side effect of all those supplements (or neutraceuticals, as they’re now often called). Within a few weeks of beginning his experiment, Cloud began to wake up every morning feeling like “a lion who will eat the world.” And, indeed, the food log he was keeping revealed that he had begun to change his eating habits, going from dinners of, say, grilled chicken, vegetables and brown rice to ones that featured a burger, French fries and onion rings.

Psychologists have a name for my behavior: the licensing effect. (Nutritionists have called it compensation.) The nutraceuticals had made me feel virtuous. Vitamin C? Niacin? Vitamin K? I had plenty. Any nutrient that my body could possibly need would be provided by these pills and powders. So I changed my routine. Other people may have to eat sautéed kale, but I get fries.

It took him three months, he says, to lose the 10 pounds he gained during the supplement experiment.

Cloud’s article also contains a helpful reminder to consumers that the U.S. government does not regulate the $28 billion-a-year U.S. dietary supplement market in any meaningful way (thanks in large part to Sen. Orrin Hatch, R-Utah):

[N]o government agency catalogs (let alone tests) dietary supplements. Under a 1994 law, the federal government defines dietary supplements as any vitamin, mineral or herb (along with a few other more obscure substances) that is intended to be swallowed in order to augment diet. The U.S. Food and Drug Administration lacks the authority to approve prospective supplements for safety or effectiveness, and the agency can’t act to restrict even a reputedly risky product until it hits the market.

But, as Cloud’s experiment also points out, safety isn’t the only problem with nutraceuticals. There’s also the question of their effectiveness. The overwhelming scientific evidence to date — not just anecdotal stories like Cloud’s — shows that for most people, supplements are a waste of money.

“You can take vitamins on the faith that they will make you better — and if you have a real vitamin deficiency, they will,” writes Cloud. “But there’s more science behind another way of getting your vitamins: eating right.”

Unfortunately, Cloud’s article doesn’t seem to be available online to non-Time magazine subscribers, and that issue of the publication (Sept. 12) is now off the newsstands. You can, however, watch a short video at the Time website of Cloud describing his experiment.