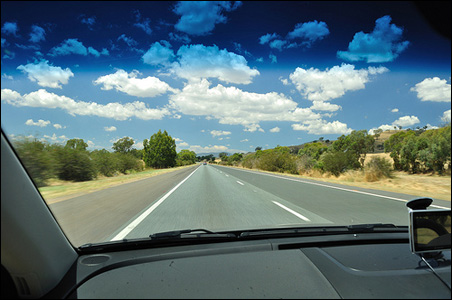 Flickr/CC/Boost Samurai
Two hours there, one hour back. Why do return trips seem shorter?

Why does returning from a trip — say, from a week of wilderness camping in the Boundary Waters or a weekend of biking and theater-going in Lanesboro, Minn. — always seem to be shorter than the initial, outgoing trip, even when the distance and the actual time traveled are identical?

That’s the puzzling question that three researchers — two from Tilburg University in the Netherlands and one from Elizabethtown College in Pennsylvania — decided to explore in a recent study.

Specifically, the researchers decided to test two possible explanations for the return-trip phenomenon. They knew that previous research had shown that we tend to remember new and/or unpredictable tasks as taking longer than they actually do.

So, perhaps it’s the newness and unpredictability of the initial leg of a journey that makes it seem longer.

The other possible explanation had to do with expectations. We are notoriously bad at estimating how long something has taken in the past — or will take in the future.

So, maybe the outgoing trip seems longer because we have an unrealistic expectation about how long it will take us to get there.

Three experiments
To figure out which one of these explanations might be behind the return-trip effect, the researchers conducted three separate experiments. In the first, 69 participants (with a median age of 33) took a relatively short (under two hours each way) bus trip to either a shopping event or a large theme park. In the second experiment, 93 students (median age 19 years) biked about 6 miles to an event, and then returned — some by a different, but equally long, route.

During the third experiment 139 participants (median age 21) watched a video of a student traveling 7 minutes by bike between two houses. The return video seen by some of the participants showed the student returning via a different (but equally long) route.

All three experiments demonstrated that the return-trip effect definitely exists. In fact, the phenomenon was quite large — in the bicycle experiment, for example, the return trip was judged to take 17 percent less time than the initial trip even when the cyclists returned by a different route.

Specifically, participants estimated that the initial bike trip took them an average of 44 minutes and the return trip an average of 37 minutes. In reality, both legs of the journey took the riders about 35 minutes.

That finding indicates that the return-trip effect is not the result of increased familiarity with the route, but a result of a “violation of our expectations” about the trip’s duration, as the researchers put it.

“Participants felt that the initial trip took longer than they had expected,” the researchers wrote in their study’s conclusion. “In response, they likely lengthened their expectations for the return trip. In comparison with this longer expected duration, the return trip felt short.”

“The greater the participant’s expectations were violated on the initial trip,” the researchers added, “the more they experienced the return trip effect.”

In fact, when the researchers manipulated people’s expectations for how long the bike ride in the third experiment’s video would take — in other words, when they told the participants the ride would take longer than it actually did — the return-trip effect disappeared.

The study’s findings may also explain why we don’t usually experience return-trip effect on routes we travel frequently, such as to and from work. The more we travel a route, the more accurate our expectations become about its duration.

Other applications?
As the authors of this study note, the cause of the return-trip effect could involve other factors that they didn’t investigate, such as the value we assign to a particular journey and its destination.

The authors also point out that these findings may have other interesting applications. “The return trip effect could help us predict people’s time estimates on other repeated tasks,” they write. “For example, we predict that people who watch a movie for a second time are likely to perceive the second viewing as taking less time (especially if the first viewing seemed overly long). Indeed, one of the authors noted a similar effect when reading a story to his children the second time.”

The study appeared in the August issue of the journal Psychonomic Bulletin Review.