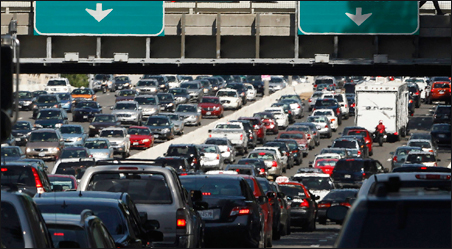 REUTERS/Jason Reed
A survey involving 1,000 women living in a large, unidentified Midwestern city found that commuting is “the absolute worst thing in the world.”

As we head into the long Labor Day weekend, I thought I’d highlight some research on two psychological health topics near and dear to working people — the fortunate ones who are not currently unemployed, that is.

None of the findings for these topics — how technology and other factors have made it more difficult to detach psychologically from our work when we’re at home and how a long work commute hinders our happiness — will come as a surprise to anybody. But they do serve as a reminder that our lifestyle choices can influence how successfully we navigate the work-home divide — and our happiness.

The difficulty of leaving work at work
One recent study looked at how people successfully (or not) detach psychologically from their jobs during non-work hours. As the authors of the study, which appears in the Journal of Occupational Health Psychology, note, “psychological detachment from work during nonwork time is important for employee recovery and health.”

But even when these factors are present, employees find it difficult to not be drawn into work activities on their off hours. The authors suspected that use of technology (e-mail, Internet, cell phones, PDAs) was a key reason. So they surveyed 431 recent college graduates with full-time jobs and found that, yes, indeed, people who succumbed to using those technologies for work purposes while at home struggled to keep their home and work lives separate.

Like I said, no surprise there. But the findings are a reminder that we need to be proactive about keeping our work, well, at work.

“It’s important to note that technology did not explain all of the variance [in the work-home detachment identified in the study],” note the writers of a summary of the study on the British Psychological Study’s website, “which means that setting strict rules about technology use is not the only way to help psychological detachment, nor necessarily sufficient; you may want to develop habits that deal with ruminations [worries about work], develop end-of-day rituals, or establish clearer boundaries with colleagues. But technology certainly plays a part, and so it’s worth considering the practices of your own workplace: for instance, are the trends towards shedding work desktops for laptops, and ‘bring your own computer’ programs, helping or hurting us?”

The ‘commuting paradox’
Over at his Frontal Cortex blog at Wired, science writer Jonah Lehrer riffed this week on happiness research, including the impact that commuting has on our happiness. He cites, for example, a survey involving 1,000 women living in a large, unidentified Midwestern city, which found that commuting is, as Lehrer puts it, “the absolute worst thing in the world.”

“[I]t’s not just survey data that confirms the horror of rush hour,” says Lehrer. “A few years ago, the Swiss economists Bruno Frey and Alois Stutzer outlined a human bias they called ‘the commuting paradox.’ They found that, when people are choosing where to live, they consistently underestimated the pain of a long commute. As a result, they mistakenly believed that the McMansion in the suburbs, with its extra bedroom and sprawling lawn, will make them happier, even though it might force them to drive an additional forty-five minutes to work. It turns out, though, that traffic is torture, and the big house isn’t worth it. According to the calculations of Frey and Stutzer, a person with a one-hour commute has to earn 40 percent more money to be as satisfied with life as someone who walks to the office.”

Enjoy the long commute-free weekend. And try to stay unplugged.