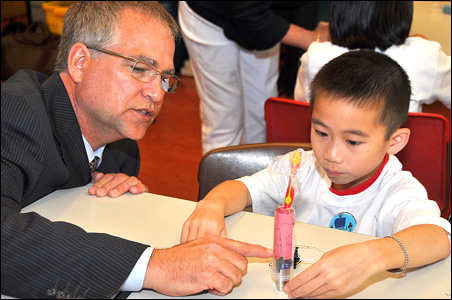 CC/Flickr/Simon Fraser
When students are given explicit instructions, when they are told what they need to know, they become less likely to explore on their own.

In his Frontal Cortex column for Wired this week, science writer Jonah Lehrer (“How We Decide” and “Proust Was a Neuroscientist”) talks about three recent experiments that should give every parent — and teacher — pause.

The experiments suggest that telling kids how the natural world works (in other words, not letting them figure things out themselves) may help explain one of the sad observations about childhood: Most kids become less curious and interested in science as they grow older.

And that fact may explain why only 28 percent of Americans, according to a 2008 survey, can understand complex science issues. (Surprisingly, even with that dismal percentage, the U.S. outperforms most European countries in scientific comprehension.)

Here’s Lehrer’s description of one of the experiments. Published in the journal Cognition earlier this year, the experiment illustrates how giving kids explicit instruction limits their spontaneous exploration and discovery:

This research consisted of giving 4-year-olds a new toy outfitted with four tubes. What made the toy interesting is that each tube did something different. One tube, for instance, generated a squeaking sound, while another tube turned into a tiny mirror.

The first group of students was shown the toy by a scientist who declared that she’d just found it on the floor. Then, as she revealed the toy to the kids, she “accidentally” pulled one of the tubes and made it squeak. Her response was sheer surprise: “Huh! Did you see that? Let me try to do that again!” The second group, in contrast, got a very different presentation. Instead of feigning surprise, the scientist acted like a typical teacher. She told the students that she’d gotten a new toy and that she wanted to show them how it worked. Then, she deliberately made the toy squeak.

After the demonstration, both groups of children were given the toy to play with. Not surprisingly, all of the children pulled on the first tube and laughed at the squeak. But then something interesting happened: While the children from the second group quickly got bored with the toy, those in the first group kept on playing with it. Instead of being satisfied with the squeaks, they explored the other tubes and discovered all sorts of hidden surprises. According to the psychologists, the different reactions were caused by the act of instruction. When students are given explicit instructions, when they are told what they need to know, they become less likely to explore on their own. Curiosity is a fragile thing.

The moral is that parents and teachers must navigate the fine line between giving kids a taste of knowledge – the universe is not all mystery — while at the same time preserving a sense of ambiguity and uncertainty. When we explain things to kids, we shouldn’t pretend that we have all the answers. We shouldn’t turn science class into a dry recitation of facts that must be memorized, or only conduct experiments in the classroom in which the results are known in advance. Because it’s the not knowing – that tang of doubt and possibility — that keeps us playing with the world, eager to figure out how it works.

Lehrer’s column includes a discussion of two other experiments with similar results. You can read it here.

How to keep your child curious about science (hint: stop lecturing)