zerocancer.org
Prostate screenings, such as those offered by KARE 11 at the State Fair, is seen by some as a controversial practice.

On his HealthNewsReview blog earlier this week, health news watchdog and former University of Minnesota journalism professor Gary Schwitzer takes local TV station KARE-11 to task for its “Drive Against Prostate Cancer” mobile screening van that it set up this year outside the KARE-11 building at the Minnesota State Fair.

The drive is “well-intentioned,” Schwitzer writes, “but [prostate screening is] not as simple an idea as the TV station marketing people probably think it is.”

Now, if KARE really cared about the issue, it would have a shared decision-making booth at the entrance to the screening van. Because prostate cancer screening isn’t simply a matter of “Drop the corn dog, cheese curds or hot-dish-on-a-stick and have a PSA test.” But that’s the way it comes across in the setting of mass screening on the fairgrounds. There are a few things a man should think about seriously before rolling up his sleeve for the supposedly “simple” blood test.

But here, prostate cancer screening is hawked in the same setting as the modern-day carnies pitching their slice-’em-and-dice-’em devices and inventions you only see at the state fair — “only at this price today!”

Schwitzer supplies a link to a video of an interview last fall with Dr. Otis Brawley, the chief medical officer of the American Cancer Society. Brawley has long been outspoken on the issue of prostate cancer screening:

I’m very concerned. There’s a lot of publicity out there — some of it by people who want to make money by recruiting patients — that oversimplifies this — that says that ‘prostate cancer screening clearly saves lives.’ That is a lie. We don’t know that for sure…

…We’re very concerned about a number of clinics that are offering mass screening where informed decision making — where a man gets told the truth about screening and is allowed without pressure to make a decision — that’s not happening. Many of these free screening things, by the way, are designed more to get patients for hospitals and clinics and doctors than they are to benefit the patients. That’s a huge ethical issue that needs to be addressed.

A different view
I spoke Wednesday with Craig Hotvedt, executive director of Health Care 11, about Schwitzer’s criticism of the prostate screening mobile unit. “People are allowed to have their own opinions,” he said. “We don’t necessarily share that same view.”

This is the 11th year that KARE 11 has been providing free or low-cost health screenings and information to fair-goers. In addition to prostate cancer screening, KARE 11 is also offering blood pressure checks, diabetes screenings, bone-density and body-mass measurements, hearing and vision assessments, blood typing, and lower back pain evaluations, according to a press release. In addition, young children can be tested for lead exposure.

This week, volunteer nurses and doctors from the University of Minnesota Institute for prostate and Urologic Cancer are conducting the prostate cancer screening at KARE 11’s fair building. The screening includes a PSA blood test and (if a man opts for it) a rectal exam.

“As of yesterday [Tuesday], they have had 673 men take part in the screening opportunities,” said Hotvedt.

“The whole premise for bringing this group out there is to raise awareness, to get people talking,” he added. “… The screening is free and people are under no pressure to do it.”

The full story
Schwitzer’s concern is that the men who venture into the mobile unit may not be getting the full story about routine screening for prostate cancer — the findings that the screening’s harms (unnecessary treatment) may outweigh its benefits for many men.

But Dr. Badrinath Konety, chair of the U of M’s urology department, disagrees with that assessment of routine prostate cancer screening. In a phone interview Wednesday he told me that he believes the most recent research clearly shows that the benefits of such screening outweigh its risks. 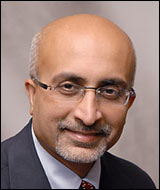 “It’s not whether prostate cancer screening saves lives or not. It definitely does,” he said.

Konety took umbrage at any suggestion that the U of M volunteers were trying to drum up business for their urology center. No names and addresses are collected, he said, and the men who are screened are urged to take their test results back to their own physicians.

Konety also said he wasn’t sure of the source or the content of the informational materials about prostate cancer screening that are given to the men when they enter the mobile unit.

Anything but routine
Many physicians share Konety’s view of routine prostate cancer screening, but many others don’t.

In other words, the decision about whether or not to be screened is a difficult and highly personal one for men — and one that requires a full, non-biased discussion of its pros and cons.

In a recent interview, Brawley offered this advice:

Update: I checked in with Schwitzer’s HealthNewsReivew site before posting this article this morning. He’s received an astoundingly angry e-mail from a representative of Zero. You can read it — and Schwitzer’s response — here. As I’ve written in Second Opinion before, the incivility expressed by some members of health advocacy groups has reached new and troublesome heights.