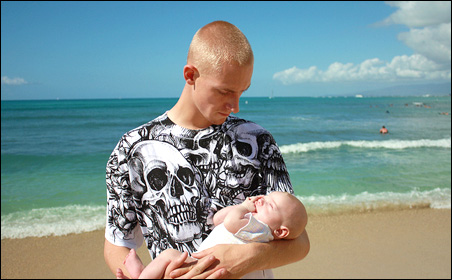 Photo by D. Sharon Pruitt
A new study has found that testosterone levels tend to drop in men after they become fathers.

Testosterone levels tend to drop in men after they become fathers — particularly among men who are actively involved in parenting, a new study has found.

This finding suggests that men are biologically programmed to help with their children’s upbringing.

The study was led by a team of researchers from Northwestern University in Chicago and published Monday in the Proceedings of the National Academy of Sciences.

The current study is the first, according to its authors, to examine testosterone levels in a large group of single men as they move into committed relationships and then into fatherhood. For the study, researchers used data collected from 624 young Philippine men who have been part of a large ongoing health study since they were about a year old in 1983. The men’s testosterone levels were measured (via saliva samples) in 2005, when most of the men were 21 years old, and again in 2009, when they were 26.  Some 465 of the men were single when the first testosterone measurements were made.

Here are the key findings:

Similar drop seen in birds
These findings are consistent with other research, the authors of the current study point out. The males of several bird and mammal species also experience a drop in testosterone levels when they are helping to raise their young. But those animals are seasonal breeders and don’t spend very long raising their young. Humans, of course, are one of the few species in which males participate in raising offspring continuously and over many years — at least until the offspring are well into their second decade.

Interestingly, although this study’s findings suggests that having high testosterone levels may make it easier for men to get into a committed relationship, other studies have found that men with high levels may not be ideal partners and parents. “Men with higher T have been shown to be more likely to have marital problems and to be divorced, whereas men with lower T have been found to spend more time with their wives,” write the authors of the current study. “In an experimental setting, men with greater T also reported feeling less sympathy or need to respond to infant cries compared with men with lower T.”

Protective against disease?
This study may also help explain why married men and fathers are at lower risk for certain diseases and premature death, say its authors.

“Our findings suggest that fathers are likely exposed to lower levels of T throughout much of their prime reproductive years, which could contribute to some of these health differentials,” the researchers write. “For instance, high T may increase risk for prostate cancer and adverse cholesterol profiles, and high T has also been linked to risk-taking behaviors that can affect men’s health, such as drug and alcohol use and promiscuity.”