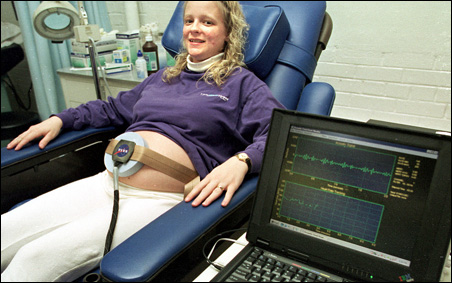 nasa.gov
Nearly all American mothers are monitored during labor, and bad fetal heart strips are an important cause of high cesarean section rates.

Over at KevinMd.com (a highly ranked medical blog that, as the Wall Street Journal puts it, “chronicles America’s often dysfunctional health care system through the prism of a primary care provider”), an ob-gyn physician asks, with considerable frustration, “Why do doctors cling to continuous fetal heart monitoring?”

The physician, Alexander Friedman, who currently occupies a maternal-fetal medicine fellowship at the University of Pennsylvania, points out what most pregnant women don’t know when they enter a hospital delivery room and are hooked up (via a belt) to a continuous ultrasound fetal heart monitor, which will follow and print out their baby’s heart rate during the labor and childbirth process:

Fetal heart monitoring has a high false-positive rate. In other words, it frequently misleads the doctor into believing — incorrectly — that a baby is in serious distress, a situation that then often leads to surgical intervention. Writes Friedman:

Nearly all American mothers are monitored during labor, and bad fetal heart strips are an important cause of high cesarean section rates. A recent report detailed the dizzying increases: Almost one in three babies was delivered by cesarean in 2007, the most recent year for which data are available. That rate has grown by more than 50 percent in a decade.

I have performed hundreds of cesarean sections during residency, and many were the result of bad heart-rate strips.

Fetal heart monitoring was originally developed to help doctors identify hypoxia, or lack of oxygen, during childbirth, a cause (but not the only one) of cerebral palsy. As Friedman writes in his essay, hypoxia is the complication that doctors fear most when they see a flat line in the baby’s heart rate after the mother’s contractions during labor.

Fetal heart-rate monitoring is a screening test. Good tests get several things right: they are cheap, detect a possible problem when there is still time to act, and minimize unnecessary follow-up tests.

Fetal heart monitoring is an appallingly poor test. The test misses the majority of babies with cerebral palsy, the condition researchers hoped it would prevent. It causes increased rates of a painful and expensive surgery: cesarean section. Even worse, almost all women undergo continuous heart monitoring during labor, not just those at highest risk.

Yet obstetricians continue to rely heavily on fetal heart monitors.

“An obstetrician will likely point to the fear of being sued,” explains Friedman, “but the complete answer is more complex. Our medical culture prizes technology and tests, even if they don’t work and can cause harm.”

You can read Friedman’s entire essay, which includes a case example from his own practice of how fetal heart monitoring can mislead a physician, at the KevinMd site.