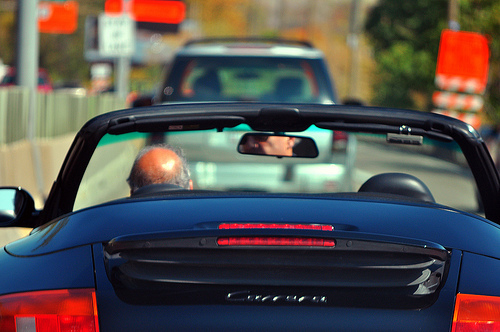 Flickr/CC/Dave H.
The origin of the term “midlife crisis” had nothing to do with buying a sports car.

It’s always illuminating to go back and identify the historical origins of scientific concepts. What you frequently find is that the evidence at the birth of the concept was weak or even entirely speculative. Yet, for a variety of reasons (often, but not always, commercial ones) the concept has become embedded in our collective belief system. We accept it as fact.

The concept of the midlife crisis is a case in point, as Jesse Bering (“The Belief Instinct”), a psychologist and director of the Institute of Cognition & Culture at Queen’s University in Belfast, Ireland, explains in his most recent “Bering in Mind” blog for Scientific American. Its origins had nothing to do with the stereotype of a balding man in his 40s or 50s buying a red sports car and ditching his wife of 20-plus years for the lithe arms of a woman half his age.

“This popular image of the ‘midlife-crisis’ is a far cry from what the scholar Elliott Jacques originally had in mind when he first coined this term back in 1965,” writes Bering. “…[W]hat Jacques, a psychoanalyst, sought originally to examine with his notion of the midlife crisis was its relation to creative genius.”

Jacques had become intrigued by how many famous male artists and thinkers (he saw this only as a male issue) seemed to either die or stop creating meaningful work between the ages of 35 and 39. After a “random study” of the lives (and deaths) of 310 famous men, he came up with the theory that genius could take one of three paths at midlife. One path is death (literally). Another is a sort of creative death in which the artist or thinker never produces anything of much note again. The third path (and, let’s face it, the one everybody hopes will be theirs) is one in which the creative output continues, but in a different — and improved — way.

An issue for ordinary men, too
You didn’t have to be brilliant, however, to experience a midlife crisis. Jacques argued that ordinary men also grappled with the same issue — and at the same time in life.

“The heart of the matter, Jacques believed, is in the discomfiting realization that one’s remaining time on earth is less than what they’ve already lived,” writes Bering. “Death is now clearly on ‘this side’ of one’s narrative rather than some faraway, remote, abstract endpoint.”

Jacques’ newly coined term, “midlife crisis,” did not become part of the general vernacular, however, until the late 1970s, when Yale psychologist Daniel Levinson published the “The Seasons of a Man’s Life.” But Levinson had a different take on the concept.

“Levinson felt that midlife crises were actually more common than not and appeared like clockwork between the ages of 40 to 45,” writes Bering. “For Levison, such crises were characterized primarily by a stark, painful ‘de-illusionment’ process stemming from the individual’s unavoidable comparison between his youthful dreams and his sobering present reality.”

Enter the red sports cars and the trophy wives.

Based on evidence? Not much
But how evidence-based are these concepts of the male midlife crisis? Not very, as Bering points out:

In the decades since Jacques and Levinson posited their mostly psychoanalytic ideas of the midlife crisis, a number of more empirically minded psychologists have attempted to validate it with actual data. And with little success. Epidemiological studies reveal that midlife is no more or less likely to be associated with career disillusionment, divorce, anxiety, alcoholism, depression or suicide than any other life stage; in fact, the incidence rates of many of these problems peak at other periods of the lifespan.

Adolescence isn’t exactly a walk in the park either — as a teen, I’d worry so much about the uncertainties of my future that I vividly recall envying the elderly their age, since for them, no such uncertainties remained. Actually, old people — at least Swiss old people — aren’t fans of the “storm and stress” of adolescence, either. Freund and Ritter asked their elderly respondents which stage of their lives they’d prefer to return to, if they could. Most said middle age.

You can read Bering’s essay on the Scientific American Blog Network.