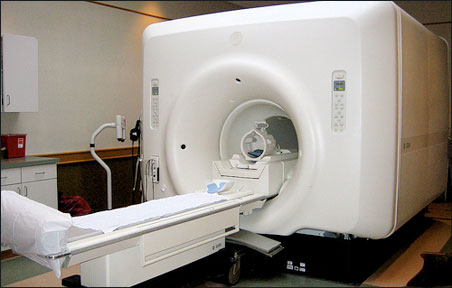 CC/Flickr/Liz West, Muffet
M.R.I. scans almost always turn up something abnormal, but most of those abnormalities are inconsequential and require no medical treatment.

Some sports-medicine physician specialists are speaking out against what they see as the massive overuse of M.R.I. (magnetic resonance imaging) scans for sports- and exercise-related injuries, according to an article that ran this past weekend in the New York Times.

That overuse, say the specialists, is leading to misdiagnoses and unnecessary and often harmful treatments.

M.R.I’s are not the only scans that are overused in medicine but, in sports medicine, where many injuries involve soft tissues like muscles and tendons, they rise to the fore.

In fact, one prominent orthopedist, Dr. Sigvard T. Hansen, Jr., a professor of orthopedics and sports medicine at the University of Washington, says he pretty much spurns such scans altogether because they so rarely provide useful information about the patients he sees — those with injuries to the foot and ankle.

“I see 300 or 400 new patients a year,” Dr. Hansen says. “Out of them, there might be one that has something confusing and might need a scan.”

“An M.R.I. is unlike any other imaging tool we use,” another physician, Dr. Bruce Sangeorzan, professor and vice chairman of the department of orthopedics and sports medicine at the University of Washington, told Kolata. “It is a very sensitive tool, but it is not very specific. That’s the problem.”

In other words, M.R.I. scans almost always turn up something abnormal, but most of those abnormalities are inconsequential and require no medical treatment.

Financial consequences
The cost of these scans certainly isn’t inconsequential, however.  Reports Kolata:

The price, which medical facilities are reluctant to reveal, depends on where the scan is done and what is being scanned. One academic medical center charges $2,721 for an M.R.I. of the knee to look for a torn ligament. The doctor who interprets the scan gets $244. Doctors who own their own M.R.I. machines — and many do — can pocket both fees. Insurers pay less than the charges — an average of $150 to the doctor and $960 to the facility.

The unnecessary treatments that result from these scans also have a monetary cost, of course, although Kolata doesn’t address that particular issue in this article.

Not many studies
Amazingly, as Kolata points out, only a few studies have looked into whether or not M.R.I. scans actually benefit patients. And nobody, apparently, has conducted a randomized, controlled trial — considered the gold standard of research — on this topic. (Such a study would randomize patients with symptoms into groups that either receive or don’t receive an M.R.I. scan and then follow them to see if their outcomes differ.)

Still, the studies that have been done have found that the scans don’t make a difference in patient outcomes — at least when used to diagnose suspected injuries to the shoulder, feet and ankles. Writes Kolata:

Dr. [Andrew] Green, [the chief of shoulder and elbow surgery at Brown University], and his colleagues reviewed the records of 101 patients who had shoulder pain lasting at least six weeks and that had not resulted from trauma, like a fall. Forty-three arrived bearing M.R.I.’s from a doctor who had seen them previously. The others did not have scans. In all cases, Dr. Green made a diagnosis on the basis of a physical exam, a history, and regular X-rays.

A year later, Dr. Green re-assessed the patients. There was no difference in the outcome of the treatment of the two groups of patients despite his knowledge of the findings on the scans. M.R.I.’s, he said, are not needed for the initial evaluation and treatment of many whose shoulder pain does not result from an actual injury to the shoulder.

Patients are part of the problem
Physicians say they feel pressured — by patients and by concerns over possible malpractice lawsuits — to order an M.R.I.

“Patients often feel like they are getting better care if people are ordering fancy tests, and there are some patients who come in demanding an M.R.I. — that’s part of the problem,” a physician told Kolata.

You can read Kolata’s article on the New York Times website. (Remember: If you aren’t a Times subscriber, clicking on the link will count toward your monthly allotment of free viewings.)