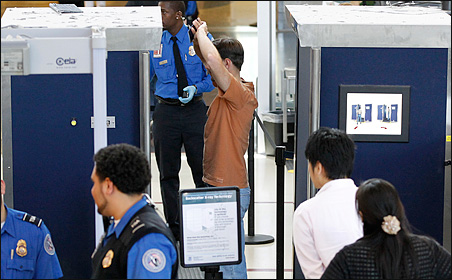 REUTERS/Danny Moloshok
A man being screened with a backscatter X-ray machine at a TSA security checkpoint at Los Angeles International Airport.

The scientific debate over airport X-ray body scanners revved up again this week with the European Union’s announcement on Monday that it was prohibiting the use of the scanners in its airports “in order not to risk jeopardizing citizens’ health and safety.”

EU airports will be permitted, however, to have millimeter-wave scanners, which use radio frequency waves rather than low levels of ionizing radiation.

The EU ban of X-ray body scanners (also known as backscatters) is at odds, of course, with the policy of the U.S. Transportation Security Administration (TSA). It currently uses about 250 X-ray scanners (and a similar number of millimeter-wave scanners) in airports around the country. Within the next three years, the TSA plans to increase the number of both machines to about 1,800, according to ProPublica reporter Michael Grabell. Exactly how many of those will be X-ray scanners is not yet clear.

A small but real risk
Earlier this month, ProPublica and the “PBS NewsHour” jointly reported on how the U.S. government has, in the eyes of some experts, underplayed safety concerns regarding the X-ray body scanners.

As the journalists pointed out in their report — and the new EU edict also acknowledges — the X-ray body scanners pose a health risk to passengers, although it’s a very, very low risk. Risk-analysis studies estimate that about six to 100 of the 100 million Americans who fly each year could be expected to develop cancer over the course of their lifetime as a result of the scanning machines.

Here’s another way of looking at that risk: The dose from one scan is about the same as one-thousandth of a chest X-ray or a few minutes of flying at a typical cruising altitude. (Flying exposes passengers to cosmic radiation.)

Yet, the fact that the body scanner produces only a fraction of the radiation exposure of a chest X-ray misses the point, say the machine’s opponents. As one radiation researcher told Grabell: “Why would we want to put ourselves in this uncertain situation where potentially we’re going to have some cancer cases? It makes me think, really, why don’t we use millimeter waves when we don’t have so much uncertainty?”

Lack of regulations
Opponents of the routine use of X-ray body scanners at airports also worry that without strict oversight, the scanners may malfunction and emit excessive amounts of radiation.

This issue — accidental radiation overdose — seems like a more serious concern, particularly given the way the scanners are currently regulated. Airport scanners are subject to a completely different set of regulations than the X-ray machines used in hospitals and clinics. Writes Grabell:

Although they deliberately expose humans to radiation, the airport X-ray scanners are not medical devices, so they are not subject to the stringent regulations required for diagnostic X-ray machines. …

Inspections of X-ray equipment in hospitals and industry are the responsibility of state regulators — and before 9/11, many states also had the authority to randomly inspect machines in airports. But that ended when the TSA took over security checkpoints from the airlines.

Instead, annual inspections are done by Rapiscan, the scanners’ manufacturer.

“As a regulator, I think there’s a conflict of interest in having the manufacturer and the facility inspect themselves,” [said Kathleen Kaufman, former radiation director for Los Angeles County].

Last year, in reaction to public anger from members of Congress, passengers and advocates, the TSA contracted with the Army Public Health Command to do independent radiation surveys. But email messages obtained in a lawsuit brought by the Electronic Privacy Information Center, a civil liberties group, raise questions about the independence of the Army surveys.

One email sent by TSA health and safety director Jill Segraves shows that local TSA officials were given advance notice and allowed to “pick and choose” which systems the Army could check.

TSA employees who work near the X-ray body scanners are not permitted to wear radiation-detecting badges, Gabrell also reports.

Backing off a public commitment
Earlier this month, after the ProPublica and “PBS NewsHour” report, the TSA told Congress it would conduct a new, independent study of the health effects of the scanners.

The TSA has now backed off that public commitment. TSA Administrator John Pistole announced at a Senate hearing last week that an internal government report on the machines by the Department of Homeland Security’s inspector general makes an independent study unnecessary.

You can read all of Grabell’s recent reporting on the isssue (and the U.S. Food and Drug Administration’s response to his reporting) at the ProPublica website.