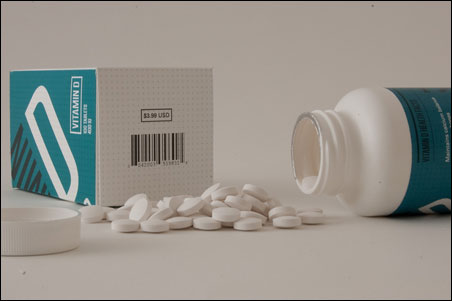 CC/Flickr/colindunn
Vitamin D is definitely the celebrity nutrient of the 21st century, but hard evidence to back up the vitamin’s benefits is lacking.

As I’ve noted here before, vitamin D is definitely the celebrity nutrient of the 21st century — the one that keeps popping up in headlines because yet another study reports it may lower the risk for this or that ailment, from the common cold to cancer.

In fact, earlier this month, several yet-to-be-published studies suggesting a positive association between vitamin D and a lower risk of heart disease were presented at an American Heart Association scientific meeting — and dutifully reported by the media.

But, as reporter Michael Smith points out in an article for Medpage Today, there’s a big problem with all this good press: “Hard evidence to back up the vitamin’s benefits is lacking.”

“There’s no data,” Dr. Clifford Rosen, the director of clinical and translational research and a senior scientist at Maine Medical Center’s Research Institute in Scarborough, Me., told Smith. “It’s all weak association studies.”

When it comes to heart disease, for example, there have been no randomized clinical trials (the gold standard of research studies) that show vitamin D reduces heart-disease risk.

One such study — the Vitamin D and Omega-3 (VITAL) trial — is under way, but it’s still recruiting participants, so any findings won’t be known for quite some time.

Right now, promoting strong bones is the only proven health claim that can be made for vitamin D. But as the Institute of Medicine (IOM) pointed out when it issued new vitamin D recommendations last fall (200 to 600 international units daily for most Americans under the age of 70), very few individuals need to take supplements for this purpose.

Most of us (yes, including those of us who live in Minnesota’s northern latitudes) get plenty of vitamin D from our food and from natural sunlight, the IOM stressed.

Some randomized trials have revealed evidence that vitamin D may have beneficial health effects not associated with bone strength, but, as Smith notes, that evidence was produced “mostly as an afterthought”:

“Many of the randomized trials people have heard about were trials designed to look at the effect of vitamin D on fractures and falls,” [said Dr. JoAnn Manson, the lead investigator for the VITAL study and a professor of epidemiology and women’s health at Harvard University], with other effects as secondary outcomes.

It’s in the nature of statistics, she pointed out, that if researchers look at enough outcomes, some will be significant just on the basis of chance.

The vast mass of the evidence for any kind of nonskeletal benefit is observational, and therefore suspect until confirmed by a properly designed, randomized trial, Manson said.

Among other things, a host of confounding factors — obesity, poor nutrition, lack of exercise — might play a role. No matter how carefully an observational study is done, she said, confounding is always possible. “Correlation does not prove causation,” Manson reminded.

She noted that randomized trials have demolished observational evidence many times in the past, notably in the cases of such former fads as beta-carotene and selenium.

According to Rosen, there is reasonable evidence that improved vitamin D status leads to better bone health and some evidence that supplements reduce all-cause mortality in elderly women.

For almost everything else, he said, hard evidence is missing.

You can read Smith’s article on the MedPage Today website.