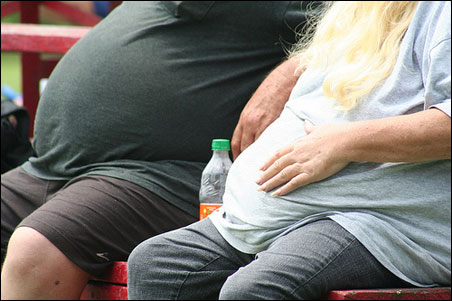 CC/Flickr/Tony Alter
If current weight trends continue, half of all Americans will be obese by 2030, a recent report has warned.

In his most recent Frontal Cortex blog, science writer Jonah Lehrer describes some intriguing new research about why people eat too much.

And one of the key reasons may have to do with our cravings for social status.

I’m not sure how useful these research findings are to individuals who are trying to lose weight, but they certainly offer some provocative new insight into why we as a society are getting larger and larger.

Much larger. According to the latest government statistics, some 33.8 percent of American adults (24.8 percent of Minnesotans) are obese (defined as a body mass index, or BMI, of 30 or more). If current weight trends continue, 50 percent of Americans will be obese by 2030, a recent report has warned.

Size matters
In his blog post, Lehrer first describes some of the many studies (including a rather ingenious one with a bottomless bowl of soup) that have revealed what I suspect surprises few people: We tend to eat more when we’re served more — whether we’re actually hungry or not.

That’s why a central tenet of successful weight control is watching serving size.

Those studies, of course, raise an interesting question: Why do we order super-sized meals when we know our bodies don’t need — or even want — those extra calories and when we know we’re not going to be able to resist downing every last morsel of food?

Yes, sometimes we simply can’t avoid the huge platefuls (or soft-drink containers) when we’re eating out. For, as Lehrer points out, American serving sizes have increased by a stunning 40 percent over the past 25 years.

But, as Lehrer also explains, there may be another, much more surprising psychological factor behind our insatiable super-sizing eating habits: an unconscious desire for higher social status.

In other words, it’s not just big-screened TVs, gas-guzzling SUVs and 5,000-square-foot McMansions that make us feel important. Our food portions do, too.

A downward spiral
At least, that’s what a recently published study suggests. Here’s Lehrer’s summary of the study’s experiments, which were conducted by a team of researchers from HEC Paris and the Kellogg School of Management at Northwestern University:

[T]he psychologists ran a number of simple experiments. In one study, they demonstrated that subjects perceived those with a larger coffee as having more status than someone who chose medium or small, even when the price was the same. (The effect also applied to pizzas and smoothies.)

“Needless to say,” writes Lehrer, “this paper captures a tragic dynamic behind overeating. It appears that one of the factors causing us to consume too much food is a lack of social status, as we try to elevate ourselves by supersizing meals. Unfortunately, this only leads to rampant weight gain which, as the researchers note, ‘jeopardizes future rank through the accompanying stigma of being overweight.’ In other words, it’s a sad feedback loop of obesity, a downward spiral of bigger serving sizes that diminish the very status we’re trying to increase.”

Not irreversible
Fortunately, this effect can be muted — apparently with a little reverse psychology. For when the study’s participants were told that prestigious events served smaller hors d’oeuvres than non-prestigious ones, those in the “powerless” group ate 25 percent less than those primed with power.

“The larger point is that we don’t just eat to fill the void in our belly,” adds Lehrer. “Instead, we eat excessively to fill all sorts of empty spots, one of which is a chronic lack of status.”

You can read Lehrer’s Frontal Cortex blog at the Wired magazine website.

Does a desire for higher status cause us to eat more?