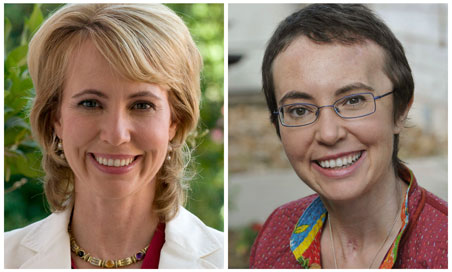 REUTERS/P.K. Weis/SouthwestPhotoBank.com
U.S. Rep. Gabrielle Giffords before and after her shooting incident.

Minnesota-based science writer Emily Sohn has written an intriguing article for Discovery News this week about how music-based therapies are being used to help people — including Arizona Rep. Gabrielle Giffords — recover their speech after a traumatic brain injury.

Particularly promising, is a type of treatment called melodic intonation therapy, which uses melody and rhythm — singing, essentially — to help people with certain types of aphasia (the medical term for an inability to communicate).

For Giffords, therapy started with songs like “Happy Birthday,” said Maegan Morrow, the Congresswoman’s music therapist at TIRR Memorial Hermann Rehabilitation Hospital in Houston. At first, Giffords would simply sing the word “you” after Morrow sang, “Happy Birthday to…”

Over time, Giffords learned to repeat ordinary phrases in a sing-songy voice. A song would gradually become a chant and finally a spoken phrase with the natural rhythm of speech.

As Sohn points out, scientists aren’t exactly sure why this type of therapy helps people with aphasia:

[O]ne likely explanation is that music is represented in many areas of the brain, while just two brain regions process language. Music also tends to dig deeper, more well-worn pathways between neurons.

So, in patients like Giffords — who suffered left-hemisphere brain damage that knocked out her Broca’s area, a major language center — often, at least some musical areas remain intact. Through music, then, patients can reach into their stored knowledge about words and use songs to create new connections for speech.

One way to understand how this might work is to imagine that someone has challenged you to speak the lyrics of a song you haven’t heard in 10 years. You probably can’t do it. But if that song suddenly came on the radio, you’d likely be able to belt out every word.

“One theory is that music is able to short-circuit the damaged area through repetition,” Rasar said. “It creates a new pathway in and people can then use that pathway out.”

These are only theories, however. No one is absolutely sure that it’s the music therapy — rather than something else — that’s helping people regain some of their lost speech. For, as Sohn also points out, the scientific research on this topic has been less than vigorous. In fact, the first randomized clinical trial (the gold standard in scientific research) to investigate the effects of melodic intonation therapy on speech recovery has just gotten underway.

“As much as we would like to say that music is a powerful medium, I think it’s important for people to test it rigorously to try to really tease out what are the components that are contributing to the effects,” Catherine Wan, the neurologist at Harvard Medical School who is conducting the study, told Sohn. “Is it because they are seeing a therapist five times a day or it’s a new therapy so they’re more motivated or is the therapy itself that is important?”

You can read Sohn’s article at the Discovery News website.

How music therapy is helping Rep. Giffords and others recover their ability to speak