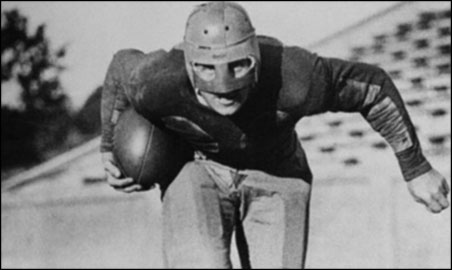 Pigskinbuzz.com
Although 21st-century helmets do help prevent severe skull fractures, they are no better than vintage leather helmets at protecting against concussions.

As I’ve noted here before, recent studies have shown that “state-of-the-art” (and expensive) running shoes don’t deliver what their ads promise: fewer injuries.

In fact, some modern running shoes (those designed for “motion control”) may even increase the risk of injuries.

Now, along comes a study on another common piece of sports equipment: the football helmet. And it’s reached a similar conclusion: Although 21st-century helmets do help prevent severe skull fractures, they are no better than vintage leather helmets at protecting against the more frequent type of football-related head injury — concussion.

When it comes to concussions, football helmet safety hasn’t made all that much progress over the past 100 years.

That’s unsettling news, not just for professional football players, but also for all the kids who play the sport. As this new study points out in its introduction, high-school and collegiate football is the leading cause of sports-related concussions in the United States. Furthermore, most experts believe that at least 50 percent of our youth’s football-related concussions go unreported.

Study details
For the study, a team of Ohio researchers from the Cleveland Clinic’s Spine Research Laboratory and Case Western Reserve University tested 11 commonly used modern polycarbonate helmets and two early 20th-century “leatherhead” helmets. Each helmet was placed on a head form (representing a player’s head) and then struck with a large adult-sized varsity helmet that was attached to another head form. The tests involved many contact points (front, oblique front, lateral, oblique rear, rear) — the same ones used in tests conducted by the National Operating Committee on Standards for Athletic Equipment (NOCSAE).

But unlike the NOCSAE tests, this study’s tests were designed to simulate the routine, low-dose (75 g-forces or less) impacts that can cause concussions and lead to serious long-term neurological problems, including memory loss and depression.

Neither helmet, however, protected fully against potentially concussion-causing hits.

The authors of the study do not recommend that players return to leather helmets. But they do say that it’s time for the development of new safety designs and testing standards for helmets — standards that will minimize the risk of both high-severity and low-severity impacts.

What needs to change
New helmets may not be the answer, however, at least when it comes to preventing concussions.

“Any kind of helmet, regardless of its structure, can’t prevent the brain from moving around in the skull,” said Pete Klinkhammer, associate director of services for the Brain Injury Association of Minnesota, in a phone interview Tuesday.

It’s that movement — the ricocheting of the brain inside the skull — that leads to injury, in part by shearing and damaging nerve fibers.

“Helmets can prevent catastrophic injuries,” said Klinkhammer, “but no helmet that we’re aware of can prevent concussions.”

Players need to wear helmets in contact sports, he added, but to reduce concussion injuries, they also need to be taught to play the game in ways that minimize the risk of severe hits to the head — using the hands rather than helmet to make first contact with an opposing player, for example.

Unlike with arms and other parts of the body, “you can’t use a cast to protect the brain,” Klinkhammer said. “But you can be taught to play differently.”

The helmet study was published in the Nov. 4 issue of the Journal of Neurosurgery: Spine.