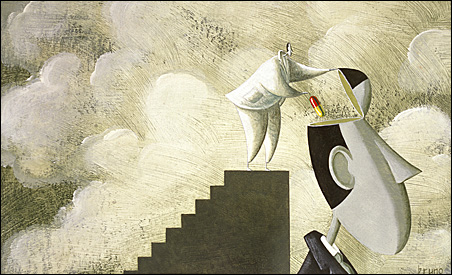 CORBIS
The placebo-as-treatment issue is a fascinating one, and the research has really only gotten under way.

The scientific quest to figure out the placebo effect — and the role, if any, it should play in modern medicine — is the focus of an article in the current (Dec. 12) issue of the New Yorker.

Written by New Yorker staff reporter Michael Specter (“Denialism: How Irrational Thinking Hinders Scientific Progress, Harms the Planet, and Threatens Our Lives”), the article asks the question, “Could studying the placebo effect change the way we think about medicine”? In other words, could placebos be used to actually treat illness?

The article’s answer is a hedged one: Maybe. Maybe not.

A science and an art?
On the “maybe” side is the man at the center of the New Yorker piece, Ted Kaptchuk, a former acupuncturist and current director of Harvard University’s Program in Placebo Studies and the Therapeutic Encounter. Despite his background in traditional Chinese medicine (a field not built on the scientific method), Kaptchuk has now come to prefer data to “the grandiose claims of alternative medicine,” writes Specter. But Kaptchuk also believes in the promise of placebo research:

P]lacebo research demonstrates that it is essential to consider both the science and the art of medicine — to think about diseases as illnesses, and not to rely solely on short-term, high-tech solutions. Scientists [like Kaptchuk] hope that, even if it proves impossible to replace drugs with placebos, research into the way they affect us will accomplish nothing less than a transformation of American medicine.

Kaptchuk tells Specter that the goal of his research “is to understand placebos so that they may be used intelligently.” What he hopes to find, he adds, is “anything that gets us away from the conveyor belts that move pharmaceutical houses to doctors and on to patients. … We need to stop pretending it’s all about molecular biology. Serious illnesses are affected by aesthetics, by art, and by the moral questions that are negotiated between practitioners and patients.”

“What is so bad from getting better from a placebo?” he asks.

Show me the data
The on-the-other-hand voice in the New Yorker article comes from Dr. Robert Temple, long-time head of the Food and Drug Administration’s drug-evaluation department. He’s one of key people who’d have to be convinced by the research of Kaptchuk and others if placebos were to become accepted treatments.

And Temple is apparently not at all impressed by any research to date on this topic, as Specter notes:

Temple said that he understands why placebos attract people who become frustrated when science fails to provide definitive answers.

“The persistence of what people believe will save their lies as opposed to the evidence is staggering,”[Temple] said. “So people are talking about using placebos as drugs. But I have no idea what that means in practical terms. How would it work?” Tantalizing hints and possible effects are not data, and Temple says there are no data that would suggest that placebos are drugs.

Too early to know
The placebo-as-treatment issue is a fascinating one, and the research has really only gotten under way. (Kaptchuk’s program at Harvard was launched earlier this year.) Who knows where it will take us or what it will ultimately find, but be prepared to hear a lot about it in coming years.

Specter’s New Yorker article offers a good primer — but you’ll need to get your hands on a hard copy of the magazine, as the article is not yet available online.