An interview with Dr. Siddhartha Mukherjee, the Columbia University oncologist and author of the 2011 Pulitzer-Prize winning “biography” of cancer, “The Emperor of All Maladies,” appeared in the British newspaper The Guardian over the weekend. 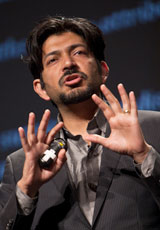 CC/Flickr/poptech
Dr. Siddhartha Mukherjee has been awarded the Guardian’s First Book award for his ‘biography’ of cancer.

In the article, Mukherjee debunks three of the biggest public myths about cancer. One is the belief that a person’s mental attitude can alter the course of his or her disease. Another is that stress causes cancer. And the third is that people have been miraculously cured of cancer by a particular supplement or dietary change (fruit juice! wheatgrass! garlic!).

All three of these myths are emotionally harmful — “nasty,” in Mukerjee’s words —because they place the blame for the disease (or its bad outcome) on something the individual with cancer did (or didn’t) do.

A disservice to patients
“It’s not true,” Mukherjee told Guardian reporter Decca Aitkenhead, that individuals develop — or die — of cancer because they have a negative mental attitude.

An oversimplication
Another widely held misconception out there is that stress causes cancer.

“There’s a role of the immune system in cancer, but it’s not as simple as people make out,” said Mukherjee. “It’s not as if you get stressed, your immune system gets depressed, and all of a sudden you get cancer. Some cancers are more affected by it, such as lymphomas. But others — for example breast cancer — have very little to do with the immune system. There’s no evidence that stress gives you breast cancer.”

And what about all the “miracle” stories of people who cured their cancer by going on a highly specialized diet or taking some kind of supplement?

“We know there are spontaneous remissions in cancer. It’s very well documented,” said Mukherjee. “Many cancers are chronic remitting relapsing diseases — that’s their very nature. And human beings are pattern-recognizing apes. It’s the secret of our success; we recognize patterns. So we induce patterns; we have an unbelievably inductive imagination, and we say to ourselves, if the sun rose in the east for the last 365 days it must rise in the east tomorrow. So we typically indulge in inductive rather than deductive reasoning. It’s very successful. But the problem with pattern recognition in this context is that it can become flawed. You might have a chronic remitting relapsing cancer and imagine it’s remitting because you’re drinking apple juice. But I don’t think it’s true. I think you’re having a chronic remitting relapsing cancer — and that’s the nature of your cancer.”

“Maybe there are miracle substances out there that change the behavior of particular cancers,” he added. “But history suggests to us that we have to be skeptics here. If it was so simple then it would have been solved a long time ago.”

You can read the full interview on the Guardian website.