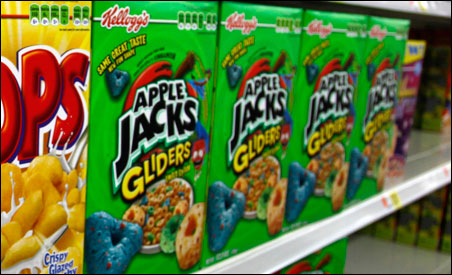 Reuters photo by Rick Wilking
A child who eats one cup of the top 45 sugary cereals is downing the equivalent of three Chips Ahoy cookies.

I’ve never understood why parents serve their kids high-sugared cereals for breakfast. For even when you put aside the health problems associated with eating those cereals daily, there’s the issue of cost.

High-sugared cereals tend to be more expensive — sometimes much more so — than healthier breakfast options.

Perhaps yet another report on the sugar content in children’s cereals will open some parents’ eyes. The Environmental Working Group (EWG) published just such a report this week. It evaluated the ingredients of 84 of the most popular ready-to-eat cereals marketed to children by four major manufacturers: Kellogg’s, Post, Quaker Oats and Minnesota-based General Mills.

What it found should sour every parent on these pointless breakfast products.

Most cereals failed
To begin with, only one in four of the cereals met the voluntary guidelines regarding sugar, sodium, fat and whole-grain content proposed earlier this year by the Interagency Working Group on Food Marketed to Children, which was put together by Congress to help tackle the childhood obesity epidemic.

The cereals’ sugar content (the primarily focus of the EWG report) is particularly bad. Two-thirds of the cereals studied contained more sugar than would be permitted under the proposed federal guidelines — a maximum of 13 grams per 50 to 55 grams of cereal, which is the equivalent of 24 percent to 26 percent sugar by weight.

(As the EWG report points out, many nutritionists think the federal panel’s voluntary guidelines for sugar are too generous. The EWG, for example, believes cereals marketed to children should contain no more than 15 percent sugar by weight. It would also like the guidelines to be mandatory.)

Here are the 10 cereals that were found to contain the most sugar. (A list of all the cereals studied and their sugar content is in the EWG report.)

If you’re having trouble grasping the meaning of those percentages, the EWG offers this helpful analogy: A child who eats one cup of the top 45 sugary cereals is downing the equivalent of three Chips Ahoy cookies.

In other words, parents, you’re feeding your child dessert for breakfast.

Why it matters
High-sugar cereals can, of course, contribute to childhood obesity — and not just because of the added empty calories. As the EWG report points out, “laboratory studies suggest that sugar is habit-forming, stimulating the same brain response as opiates. A case can be made that sugar acts as a drug, enticing kids to each more and more.”

But high-sugar cereals raise other concerns as well, as also noted in the EWG report:

Studies suggest that children who eat high-sugar breakfasts have more problems at school. They become more frustrated and have a harder time working independently than kids who eat lower-sugar breakfasts. By lunchtime they have less energy, are hungrier, show attention deficits and make more mistakes on their work.

Take action now
The food industry is lobbying hard to kill or (if that doesn’t work) to weaken the federal Working Group’s proposed guidelines.