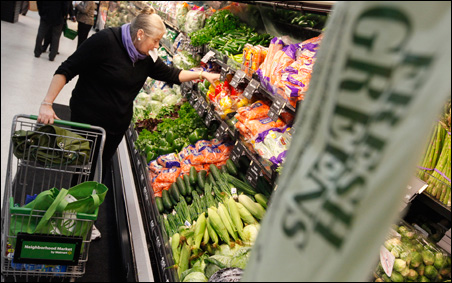 REUTERS/Jim Young
Food-insecure households are significantly less likely to serve fruits and vegetables to their families.

In the Twin Cities, food insecurity — the lack of consistent access to healthy, affordable food — is almost four times higher than previously believed and more than two-and-a-half times the national average, according to new research from the University of Minnesota.

Many of the parents reported that good-quality fresh produce was too expensive or too difficult to find in their neighborhood to purchase regularly.

“We were surprised at just how much worse off they were than we thought they would be,” said Meg Bruening, lead author of the study and a nutrition doctoral student and research assistant at the U of M’s Division of Epidemiology and Community Health.

“It adds evidence that we need to build a stronger safety net for these families — in fact for all families,” she added.

How the study was conducted
The study, which was published online Thursday in the American Journal of Public Health, used data collected from 2,095 Minneapolis and St. Paul parents and caregivers, who were surveyed by phone or mail over a 12-month period in 2009 and 2010. The respondents are part of Project F-EAT (Families and Eating and Activity in Teens), a population-based research project that’s studying how the home environments of teens influence their eating, physical activity and weight-related behaviors.

To determine food insecurity, the researchers used a standard survey module, which asked questions such as “In the past 12 months, did you or other adults in your household ever cut the size of your meals or skip meals because there wasn’t enough money for food?” Participants who responded “yes,” “often true,” or “sometimes true” to more than two of these questions were categorized as food insecure. Those that responded in that manner to five or more questions were categorized as having very low food security.

These percentages were much higher than those found in data collected by the U.S. Department of Agriculture in 2009. That data showed that the prevalence of food insecurity in Minnesota was 10.5 percent, slightly lower than the national average of 14.7 percent.

Why the difference? “We had to limit ourselves to a short version of the USDA survey tool because we were asking so many other questions,” said Bruening. “I think that’s part of it. The other part of it is we had families who were very low income. We targeted schools that were very diverse. I think families in the Twin Cities are experiencing [food insecurity] at different rates than the average of the state.”

“The Twin Cities is known for health disparities,” she added. “This is just another piece of that.”

Food-insecure parents
Other data collected by Bruening and her colleageus revealed some not-all-that-surprising demographics about the food-insecure parents: They tended to be younger, poorer, and less educated than the other respondents. They were also more likely to be single and to come from a non-white racial group.

The food-insecure parents had poorer eating habits as well. They were more likely to skip breakfast, to binge eat, and to consume unhealthy foods, such as sugary soft drinks and fast-food fare. They were less likely to include healthy foods, like green salads and fresh fruit, in their families’ daily meals.

“Other research shows that mothers [from food-insecure households] restrict their own food intake to protect their kids,” said Bruening. “I imagine that’s part of the reason we’re seeing lower healthier food intake among these parents compared to food-secure parents.”

Anecdotal evidence also suggests, she added, that when low-income people receive their monthly allotment from the federal government’s food stamp (SNAP) program, they tend to use it right away. “Then, at the end of the month, there’s nothing left,” said Bruening. “So it’s this cycle of abundance and deprivation. And when the abundance is there, people overeat because they’ve just gone two weeks without having much food.”

“Many other studies have found that access to fresh and healthy food is limited, especially in urban and rural communities,” said Bruening.

Could part of the problem be that people just don’t know how to shop and cook on a limited income?

“The entire American society, not just low-income people, are struggling with shopping and cooking skills,” said Bruening. “I really believe that we need to have a strong safety net for these people so that the access issues aren’t such a problem. If we find that it’s more than access, than we need to address that. But other [studies] have found that access to healthy food is a big deal.”

Right now, of course, the political environment is leaning toward reducing, not expanding, the budgets of many food safety-net programs.

“I think that would be a big mistake,” said Bruening. “It would be so detrimental to these families that are struggling already so much to have those programs cut.”