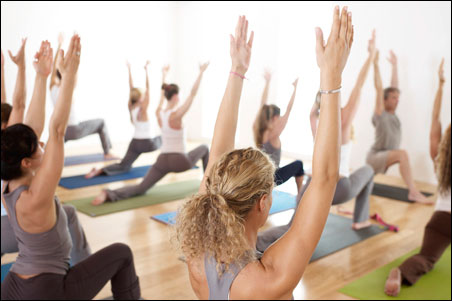 REUTERS
Has yoga lost its way?

As someone who runs through a least a few downward-facing dogs, reversed triangles, forward bends and other asanas, or yoga poses, daily (usually right after I send these Second Opinion posts in the morning), I read with both amusement and concern the excerpt from New York Times science writer William Broad’s new book on yoga (“The Science of Yoga: The Risks and Rewards”) that appears in that newspaper’s magazine this weekend.

The excerpt focuses on the health risks of yoga — i.e., how it can physically wreck your body.

I was amused because I think Broad (or, at least, this excerpt) overstates yoga’s health risks. But I was also concerned because I’ve long thought yoga — as a form of exercise — has lost its way. Over the past decade, in particular, it seems to have become a competitive sport. I’ve been in classes where the instructors acted like drill-sergeant football coaches and where students were more intent on pushing their bodies to the limit than on gently “awakening” their muscles and mind.

Many people seem to think that if they don’t leave a yoga class sweating and sore, then the class wasn’t worth their time. No wonder they’re getting injured.

As Broad documents, however, such injuries are nothing new:

The first reports of yoga injuries appeared decades ago, published in some of the world’s most respected journals — among them, Neurology, The British Medical Journal and The Journal of the American Medical Association. The problems ranged from relatively mild injuries to permanent disabilities.

In one case, a male college student, after more than a year of doing yoga, decided to intensify his practice. He would sit upright on his heels in a kneeling position known as vajrasana for hours a day, chanting for world peace. Soon he was experiencing difficulty walking, running and climbing stairs.

Doctors traced the problem to an unresponsive nerve, a peripheral branch of the sciatic, which runs from the lower spine through the buttocks and down the legs. Sitting in vajrasana deprived the branch that runs below the knee of oxygen, deadening the nerve. Once the student gave up the pose, he improved rapidly. Clinicians recorded a number of similar cases and the condition even got its own name: “yoga foot drop.”

Still, how many of us who do yoga hold the same pose for hours on end? Well, as Broad also documents, certain yoga postures can cause injury — including stroke — even if held for a relatively short amount of time:

Willibald Nagler, a renowned authority on spinal rehabilitation at Cornell University Medical College, published a paper on a strange case. A healthy woman of 28 suffered a stroke while doing a yoga position known as the wheel or upward bow, in which the practitioner lies on her back, then lifts her body into a semicircular arc, balancing on hands and feet. An intermediate stage often involves raising the trunk and resting the crown of the head on the floor. While balanced on her head, her neck bent far backward, the woman “suddenly felt a severe throbbing headache.” She had difficulty getting up, and when helped into a standing position, was unable to walk without assistance. The woman was rushed to the hospital. …

Her doctors found that the woman’s left vertebral artery, which runs between the first two cervical vertebrae, had narrowed considerably and that the arteries feeding her cerebellum had undergone severe displacement. Given the lack of advanced imaging technologies at the time, an exploratory operation was conducted to get a clearer sense of her injuries. The surgeons who opened her skull found that the left hemisphere of her cerebellum suffered a major failure of blood supply that resulted in much dead tissue and that the site was seeped in secondary hemorrhages.

That young woman never fully recovered from her stroke.

It’s important to point out that such cases are extremely rare. More common are injuries like torn rotator cuffs, popped hamstrings and cervical-disk injuries. I suspect, though, that even then, yoga doesn’t come close to racking up the injuries associated with other exercise activities, such as running, biking or even weight lifting.

Broad points out that yoga-related visits to emergency rooms (as determined by a Consumer Product Safety Commission survey) almost quadrupled within a two-year period (2000 to 2002), but the rise in absolute numbers was teeny: from 13 to 46.

Still, Broad’s overall message is an important one: Any kind of physical activity can be harmful if you don’t pursue it wisely.

Your mantra should always be: Listen to your own body. And ignore pushy yoga instructors.