In an article published May 3 in  The New England Journal of Medicine (NEJM), the surgeon and journalist Dr. Atul Gawande presents a fascinating summary of the history of surgery as reflected in papers and studies that have appeared in that medical journal during the past two centuries. 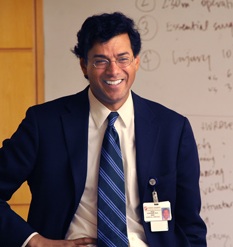 NEJM is celebrating its 200th anniversary this year.

The early days of surgery were horrific by modern standards, but surgeons persevered nonetheless. Writes Gawande:

That first [1812] volume of the Journal provided descriptions of a remarkable range of surgical techniques, including those for removing kidney, bladder, and urethral stones; dilating the male urethra when strictured by the passage of stones; tying off aneurysms of the iliac artery and infrarenal aorta; treating burns, and using leeches for bloodletting. There were articles on the problem of “the ulcerated uterus” and on the management of gunshot and cannonball wounds, not to mention a spirited debate on whether the wind of a passing cannonball alone was sufficient to cause serious soft-tissue injury.

Surgery in the early 19th century was severely limited by two big problems: pain and infection. The pain factor made surgeons work very quickly. Here, for example, is Gawande’s cringe-making description of leg amputation, a common procedure in those pre-antibiotic days when a leg wound or fracture could quickly lead to a deadly infection:

Orderlies pinned the patient down while an assistant exerted pressure on the femoral artery or applied a tourniquet on the upper thigh. Surgeons using the circular method proceeded through the limb in layers, taking a long curved knife in a circle through the skin first, then, a few inches higher up, through the muscle, and finally, with the assistant retracting the muscle to expose the bone a few inches higher still, taking an amputation saw smoothly through the bone so as not to leave splintered protrusions. Surgeons using the flap method, popularized by the British surgeon Robert Liston, stabbed through the skin and muscle close to the bone and cut swiftly through at an oblique angle on one side so as to leave a flap covering the stump.

The limits of patients’ tolerance for pain forced surgeons to choose slashing speed over precision. With either the flap method or the circular method, amputation could be accomplished in less than a minute, though the subsequent ligation of the severed blood vessels and suturing of the muscle and skin over the stump sometimes required 20 or 30 minutes when performed by less experienced surgeons. No matter how swiftly the amputation was performed, however, the suffering that patents experienced was terrible.

Yet, reports Gawande, when the surgical usefulness of ether and other anesthetic agents began being reported in the NEJM and other medical journals in the 1840s, many physicians dismissed such advances as “needless luxuries.”

Antiseptics also slow to catch on

Physicians were equally dismissive of early reports about how the washing of wounds and the use of antiseptics (carbolic acid, or phenol, was recommended as early as 1867) could lower the rate of fatal post-surgical infections.

“Ignaz Semmelweiss, the Viennese obstetrician who in 1847 had found that hand washing by birth attendants eliminated puerperal sepsis, the leading cause of maternal death, was not even mentioned in [NEJM] until the end of the 19th century,” writes Gawande.

“For decades,” he adds, “hand washing and skin cleansing remained routinely perfunctory” among physicians and in hospitals.

A string of ‘firsts’

Despite this resistance, the discoveries of ether and antiseptics brought on a succession of surgical advances, and surgery soon became a dominant force in medicine. The first gallbladder operation occurred in 1868; the first appendectomy, in 1880; and the first successful removal of a brain tumor, in 1884.

Gawande also tells the story of the enterprising Werner Forssmann, who in 1929, when he was a 25-year-old medical intern in Germany, published the first report of a successful heart catheterization, a procedure in which a tube (catheter) is inserted into the heart via a vein. The procedure is now, of course, routinely used to diagnose and treat heart conditions.

“Forbidden by his professors from attempting the experiment on either animals or patients (they thought the idea preposterous and dangerous), he performed it on himself,” writes Gawande. “His investigation would eventually lead to the creation of the field of cardiology and win Forssmann the Nobel Prize in Medicine.”

Yet, the pattern of physician-resistance to new ideas continued, and “it was more than a decade before anyone recognized the significance of his report,” reports Gawande.

An average of seven operations

Although surgical breakthroughs still occur, they no longer dominate the pages of NEJM, says Gawande. Still, surgeons are “traversing remarkable frontiers,” he writes. “… Virtually no one escapes having a condition for which effective treatment requires surgery — a serious orthopedic injury, a cataract, a tumor, obstructed labor, joint failure, severe cardiac disease. Today, surgeons have in their arsenal more than 2,500 different procedures.”

The average person, he adds, can expect to undergo seven operations during his or her lifetime.

Yet “the science of effectively routinizing surgery for mass populations is still in its infancy, as it is for all areas of medicine,” Gawande writes. “The [NEJM] is entering its third century of publication, yet we are still unsure how to measure surgical care and its results.”

It makes one wonder what aspects of today’s surgical procedures — and of medicine in general — will appear horrific to NEJM readers in another two centuries.

You can read Gawande’s article on the NEJM website.

First 200 years of surgery recapped; how will today’s look in two centuries?