We’re hearing more and more about “pre-diabetes.” But is it a manufactured medical condition?

“We’re being told,” writes Fuller, “that pre-diabetes is an epidemic among people on the verge of developing the real thing [type 2 diabetes] and the main reason, according to the popular narrative, is obesity and well, irresponsible sloth.”

But not everybody is on board with that narrative, as Fuller points out.

In Canada, as in the United States, the number of people with pre-diabetes is said to be startlingly high — about three times higher than the number of people with diabetes. In the United States, the Centers for Disease Control and Prevention estimates that 26 million adults have type 2 diabetes and another 79 million have pre-diabetes. (The numbers in Canada are 2.7 million and 6 million, respectively, according to Fuller.)

Those are scary numbers, and they’ve come about because of a lowering of the blood glucose level thresholds that are used to diagnosis type 2 diabetes and now its recently proclaimed precursor, pre-diabetes. But as Fuller documents, pre-diabetes is not a universally accepted diagnosis. In Europe, the preferred term is “non-diabetic hyperglycaemia,” and the diabetes community there has been urged “to avoid the use of the term ‘pre-diabetes’ when describing those with an impaired fasting glucose,” writes Fuller.

The European Diabetes Epidemiology Group (EDEG), which reviews and comments on diabetes data, has pointed out, says Fuller, that “many people who meet the threshold for non-diabetic hyperglycaemia revert to normal glucose levels in subsequent testing. In addition, [the EDEG] said, ‘there is no fixed state of pre-diabetes’ and warned of the emergence of a ‘pandemic’ if the lower [blood glucose level] thresholds were used.”

Fuller sees the emergence of the term pre-diabetes as an example of what others have called “disease-mongering,” the widening of a disease’s diagnostic criteria in order to expand the market for treating it. 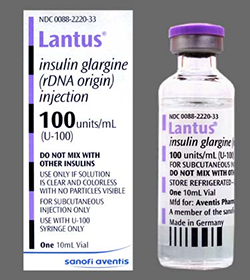 The diagnosis of pre-diabetes is bad news for patients and their families, most of whom have no idea about all the drama in the background. But it’s also bad news for society as a whole because of the enormous costs associated with treating millions of people who do not have a medical condition. But for the pharmaceutical and diagnostic industries, it’s a great turn of events — and there’s little doubt that Big Pharma has influenced the lower thresholds that have been put in place.

One of the companies that is hoping to benefit from a diagnosis of “pre-diabetes” is Sanofi, one of the largest pharmaceutical companies in the world. It has just unveiled a study that says [the] insulin glargine (brand name Lantus) can delay full-blown Type 2 diabetes in those diagnosed with being on the verge of having the real thing. It’s no coincidence, of course, that glargine is a Sanofi product and one of the most expensive insulins on the market.

The emergence of “pre-diabetes,” according to one marketing firm, “should be viewed as an opportunity for pharmaceutical companies and manufacturers of blood glucose meters and nutriceutical products” who can educate physicians about new treatments for the pre-disease. And it’s a big market — a much bigger market than the one made up of people who already have diabetes.

Although Fuller doesn’t mention it, BigPharma is not alone in taking advantage of this huge new market. The multi-billion-dollar supplement industry has also been touting its products for the treatment of pre-diabetes.

You can read Fuller’s article on the PharmaWatch Canada website. (Hat tip: HealthNewsReview.)

‘Pre-diabetes’: A case of disease-mongering?