One of Britain’s most famous and outspoken physicians, psychiatrist and epidemiologist Dr. Ben Goldacre, has just published a new book, “Bad Pharma: How Drug Companies Mislead Doctors and Harm Patients.” It won’t be available on this side of the pond until early next year, but if it’s anything like Goldacre’s 2008 book, “Bad Science: Quacks, Hacks, and Big Pharma Flacks,” it will be another “fine lesson in how to skewer the enemies of reason and the peddlers of cant and half-truths” (as a reviewer for The Economist magazine put it).

On Tuesday, Goldacre posted the forward to “Bad Pharma” on his Bad Science blog. It includes this summary of the book’s central theme, which is also a useful summary of the state of medicine today (warning: English spellings):

Drugs are tested by the people who manufacture them, in poorly designed trials, on hopelessly small numbers of weird, unrepresentative patients, and analysed using techniques which are flawed by design, in such a way that they exaggerate the benefits of treatments. Unsurprisingly, these trials tend to produce results that favour the manufacturer. When trials throw up results that companies don’t like, they are perfectly entitled to hide them from doctors and patients, so we only ever see a distorted picture of any drug’s true effects. Regulators see most of the trial data, but only from early on in its life, and even then they don’t give this data to doctors or patients, or even to other parts of government. This distorted evidence is then communicated and applied in a distorted fashion.

In their forty years of practice after leaving medical school, doctors hear about what works through ad hoc oral traditions, from sales reps, colleagues or journals. But those colleagues can be in the pay of drug companies – often undisclosed – and the journals are too. And so are the patient groups.

And finally, academic papers, which everyone thinks of as objective, are often covertly planned and written by people who work directly for the companies, without disclosure. Sometimes whole academic journals are even owned outright by one drug company.

Aside from all this, for several of the most important and enduring problems in medicine, we have no idea what the best treatment is, because it’s not in anyone’s financial interest to conduct any trials at all. These are ongoing problems, and although people have claimed to fix many of them, for the most part, they have failed; so all these problems persist, but worse than ever, because now people can pretend that everything is fine after all. 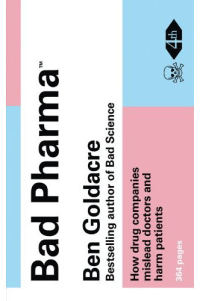 Goldacre makes clear, however, that his book is not just about bad people. “In fact,” he writes, “it’s possible for good people, in perversely designed systems, to casually perpetrate acts of great harm on strangers, sometimes without ever realising it. The current regulations – for companies, doctors and researchers – create perverse incentives; and we’ll have better luck fixing those broken systems than we will ever have trying to rid the world of avarice.”

“Some people will say that this book is an attack on the pharmaceutical industry, and of course it is,” he adds. “But it’s not only that, and it’s not unbounded. I suspect that most of the people who work in this industry are fundamentally good-hearted, and there is no medicine without medicines. Drug companies around the world have produced some of the most amazing innovations of the past fifty years, saving lives on an epic scale. But that does not allow them to hide data, mislead doctors and harm patients.”

“Bad Pharma” will be released in the U.S. on January 8. In the meantime, you can read an excerpt from the book that was published earlier this week in Britain’s Guardian newspaper.

‘Bad Pharma,’ and how it misleads doctors and patients, is subject of new book