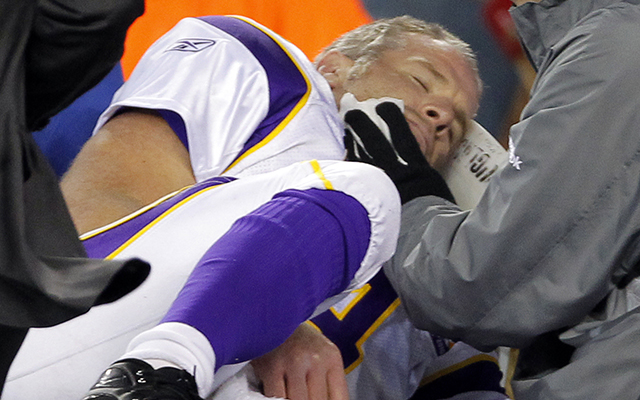 REUTERS/Adam HungerFormer quarterback Brett Favre in a Thursday interview: “This was pretty shocking to me that I couldn’t remember my daughter playing youth soccer, just one summer, I think… For the first time in 44 years, that put a little fear in me.”

The number of people watching NBC’s Sunday Night Football may be the highest it’s been in 17 years.

But that doesn’t mean the future of football isn’t in trouble.

According to a survey released Wednesday (but taken last July), most U.S. adults — 86 percent — are now aware that scientists have found a connection between concussions suffered on the gridiron and long-term brain injury.

And that knowledge, the survey also found, has left one in three Americans less likely to permit their sons to play football.

Some 13 percent said they absolutely wouldn’t let their child play the game.

In addition, 14 percent of the survey’s respondents said learning about the relationship between playing football and long-term brain injury has made watching the sport less enjoyable.

But it’s the changing attitudes among parents toward youth football that may, eventually, cause football to go the way of boxing and lose most of its large fan base. (Although difficult to imagine today, prizefighting was the most popular American spectator sport of the 1920s.)

“Historically, youth football has fueled the [National Football League],” stated Dr. Keith Strudler, director of the Marist College Center for Sports Communication, which published the survey along with HBO Real Sports, in a press release. “Parents’ concern about the safety of the game could jeopardize the future of the sport.”

The death in September of 16-year-old Damon Janes, a running back at Brocton High School In New York, after a helmet-to-helmet collision has only deepened parents’ concerns.

As media reports of Janes’ death pointed out, he was the fifth high school or college football player to die this year during a practice or game — a statistic that must have jolted many parents.

But 2013 has been a relatively quiet year in terms of such deaths. In the average year, 12 high school and college players die in the United States while engaged in the sport, according to a recent study published in the American Journal of Sports Medicine.

That study documented 243 high school and college football-related deaths between July 1990 and June 2010. Of those, 62 were due to brain injury. The others resulted from an underlying (and usually undiagnosed) heart condition or heat-related causes.

Those are just the deaths, however. Many, many other young football players suffer permanent and often severely debilitating injuries, including paralysis and long-term brain damage.

Football-related concussions alone result in 25,000 emergency-room visits each year, according to the Centers for Disease Control and Prevention.

This week, the Atlantic magazine published a long article on the threat that head injuries in particular pose for the future of youth football — and, by extension, for professional football.

“Football’s popularity at the high-school level is slowly diminishing, with participation numbers decreasing each year since the 2008-2009 season, according to the National Federation of State High School Association,” reports Isobel Markham. “It’s too early to tell for sure, but this may be a result of concerned parents questioning the wisdom of allowing their child to play such a dangerous sport. If this trend continues, high-school football, a key feeder in the NFL pipeline, will have to adapt if it wants to survive.”

Yet, adaptation is not what many fans of the sports want. One father of a high-school footballer interviewed by Markham had this lament about the way the sport is played today in youth leagues: “You don’t hear the smack … you don’t hear the tackling … it’s not the same.”

Those adaptations are being implemented, nevertheless.

In the NFL, certain hits with the crown of the helmet are now banned, as are almost all tackles during pre-season training camps.

And there’s talk of banning kickoffs, a period of the game in which players are particularly at risk of sustaining a concussion.

Many neurologists and other medical experts are not impressed, however, with such rule changes. Writes Markham:

Bill Zollweg, a professor of sport sociology at the University of Wisconsin, La Crosse, says these new rules are a mere decoy, smoke and mirrors created by the NFL to fool players and football fans into thinking they are doing something. “All the changes we’re currently making in football, they can’t have an impact on concussions,” he said. “I don’t for a heartbeat believe they’re concerned about the physical well-being of the athlete.”

The concern, Zollweg says, is profit — and that can be sustained only if there is a continued interest in the gridiron. “Sport is a money-making business,” he said. “They can’t have a diminished fan-base and survive.”

Many fans are hoping that better equipment will save the sport. But, as Markham points out, “Concussions are caused not so much by direct hits to the head as by the resulting acceleration and deceleration. The sophistication of helmets can do very little to protect against such motion, which occurs inside the skull.”

In fact, as I’ve noted here before, modern, state-of-the-art football helmets have been shown in laboratory tests to be no better at protecting against concussions than the “leatherhead” helmets of 100 years ago.

A symbol of American exceptionalism

Markham ends her article with a provocative exploration of how football’s strong identification with Christianity, masculinity and American exceptionalism have hindered an open and honest discussion about the sport’s dangers to players’ physical health.

“Football is often jokingly referred to as America’s national religion, but the bond between the two spheres is very real,” she writes. “Having members of the clergy travel with NFL teams has become common practice, and for many fans, the question on the cover of the pre-Super Bowl edition of Sports Illustrated, ‘Does God Care Who Wins the Super Bowl?’ is a serious matter.”

“Zollweg thinks this intermingling of football and Christianity could have dangerous consequences,” she adds. “It gives the players the sense that whatever happens is God’s will and for the best,” he said. ‘They blend religion right in with the sport to make it more acceptable for players to take the kind of risk that they take.’”

The sport’s masculine identity is also inhibiting change, Zollweg told Markham, because any efforts to make the game safer are seen, by some fans at least, to be “a symbol of the ‘feminization of America.’”

That perceived feminization of the game also threatens the idea of American exceptionalism, a concept for which football has become emblematic in many fans’ eyes.

“It’s tied up with power and domination and protecting territory,” Jay Coakley, emeritus professor of sport sociology at the University of Colorado, told Markham.

‘Who’s going to be desperate enough?’

Football may be symbolic of several strong threads currently running through American culture, but that doesn’t mean it isn’t vulnerable to an eventual decline.

As Coakley pointed out to Markham, college football isn’t nearly as popular as its visibility in the media would indicate. Only about 20 percent of people on college campuses — even in cities with prominent NFL teams — are interested in football, he said.

Yet, “those people are making all the noise and, in a sense, leading us to think that football is more culturally relevant than it actually is,” he added.

Coakley — and a growing number of others who follow such matters — believe the sport will gradually become even less relevant as its serious health risks are better understood. Writes Markham:

A reason football is often such a focus on college campuses is that the sport is the only means through which many players can attend. Lucrative football scholarships are, for some, their only ticket to a top school.

“When [we] don’t have a choice, we’re going to put our bodies on the line,” said Coakley. He believes that in the future the only thing that will keep people playing football and encouraging their children to play will be desperation.

“Who’s going to be desperate enough to encourage their kids to play a sport in which their brain cells are going to be damage?”

You can read Markham’s article on the Atlantic website.

As parents’ attitudes change, football’s popularity could go the way of prize fighting