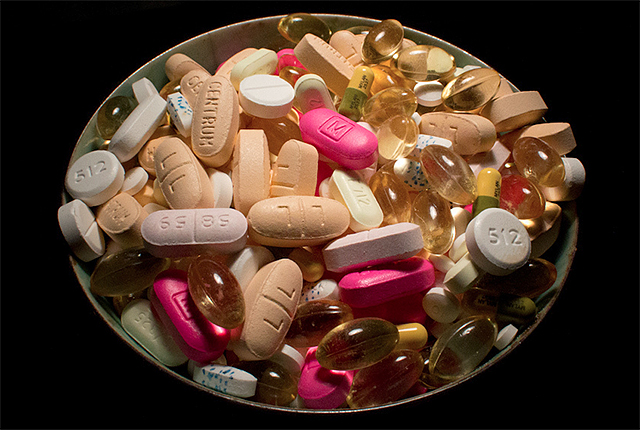 Creative Commons/Steven DePoloThe $30-billion-a-year nutritional supplement industry has successfully lobbied Congress to not give the FDA legal authority to ensure that vitamins, minerals and other supplements are safe and effective before they go on the market.

Slowly — ever-so-slowly — people seem to be getting the message, supported by a multitude of recent scientific studies, that vitamin and mineral supplements are not only a waste of money for most of us, but also potentially harmful.

Whether or not people heed that message is another matter. As I’ve reported here before, at least half of Americans regularly take some kind of nutritional supplement, mostly vitamins and minerals.

That percentage is much higher than what’s found in other countries. In the United Kingdom, for example, about a third of adults take some kind of vitamin, mineral or dietary supplement on most days.

Still, British public health officials are as concerned about the massive overuse of nutritional supplements as their American counterparts.

Last week, BBC News ran an article on the topic by Dr. Chris van Tulleken, a British physician who is an occasional BBC-TV “presenter” of health-related news shows.

He begins by acknowledging — rightly so, of course — that the enrichment of certain widely used foods with vitamin and minerals “has been one of the most effective public health interventions in history.”

For example, in the United States, supplementing milk with vitamin D in the 1930s greatly reduced the incidence of rickets and other bone deformities in children. And adding niacin to bread during that same decade caused U.S. cases of pellagra, a disease that used to kill many poor Americans, especially in Southern states, to plummet.

Such interventions continue to save lives. “Vitamin A deficiency hugely increases the risk of blindness and death in children with measles and diarrhea in developing countries,” writes van Tulleken.

Yet, he stresses, “the World Health Organization recommends a very strict amount [emphasis added] and cautions that higher doses can cause birth defects in early pregnancy among other problems.”

Unfortunately, the success of such public-health supplementation programs has led people to believe what van Tulleken calls “that most beguiling of all logical falsehoods — if a little is good, then more must be better.”

But more is definitely not better when it comes to vitamin and mineral supplementation. In fact, more can be dangerous, as a number of systematic review papers (ones that look at all relevant studies on a topic) have found.

Here, for example, is the conclusion from a 2012 systematic review published by the highly respected (and independent) Cochrane Collaboration:

We found no evidence to support antioxidant supplements [a group that includes beta-carotene, selenium, and vitamins A, C and E] for primary or secondary prevention. Beta-carotene and vitamin E seem to increase mortality, and so may higher doses of vitamin A. Antioxidant supplements need to be considered as medicinal products and should undergo sufficient evaluation before marketing.

“Just to be clear — ‘increase mortality’ — that means they’re killing you,” writes van Tulleken. “These are powerfully bioactive compounds.”

Why are these compounds dangerous in excess doses? Here’s van Tulleken’s explanation:

Their functions are understood largely by their deficiency diseases so we’re not exactly sure of precisely what they all do or how they interact. Antioxidants provide a nice example. They soak up the very toxic, chemically-reactive by-products of metabolism called free radicals. These free radicals, left unchecked, can cause damage to DNA and may be linked to cancer.

Your cells are full of antioxidants but surely taking more would be better? Right? Keep those cancer causing radicals under control? Well, unfortunately, your body’s immune system fights infections by using free radicals to kill bugs. Exactly what effect huge quantities of extra antioxidants could have on this is not clear but it’s easy to imagine that it might not be good and you could get more infections.

Vitamin A is linked to increasing lung cancer in smokers. Excess zinc is linked to reduced immune function. Long-term excessive intake of manganese is linked to muscle and nerve disorders in older people. Niacin in excess has been linked to cell damage. And so on.

So it’s not just that taking lots of one thing is not good for you, it’s that it may cause a dangerous reduction in something else even if you are also supplementing that. To work out the optimal ratios is all but impossible although some manufactures claim to have worked it out.

As van Tulleken points out (and as other scientists have done before him), nutritional supplements lack any kind of meaningful government regulation. In the United States, the reason is an all-too-familiar one: the $30-billion-a-year nutritional supplement industry has successfully lobbied Congress to not give the FDA legal authority to ensure that vitamins, minerals and other supplements are safe and effective before they go on the market.

Apparently, a similar situation exists in the United Kingdom.

Van Tulleken notes that public health officials recommend supplements only for certain groups of people who are at high risk of deficiency, such as pregnant women (folic acid) and people who are housebound for long periods of time (vitamin D).

A need for skepticism

Consumers need to be much more skeptical of the messages coming their way from the dietary supplement industry. Always, always consider the source.

“Don’t trust the science done by the people who are trying to sell [dietary supplements] to you and don’t assume that if some is good more must be better,” he stresses. “It’s like beer. Or coffee. Or computer games. Goldilocks was right about things needing to be just right.”

You can read van Tulleken’s article on the BBC website.