I watched about 20 minutes or so of an episode of “16 and Pregnant” about two years ago. I can’t recall much about the popular MTV reality show, except I do remember worrying that it might be glorifying the life of teen moms.

Apparently, I needn’t have worried. For, according to a new study from the National Bureau of Economic Research, “16 and Pregnant,” along with its spinoff  “Teen Mom” shows, helped lower the teen birthrate in the U.S. by 5.7 percent — or about 20,000 births — during the first 18 months after it debuted in June 2009.

That accounts for about one-third of the overall decline in U.S. teen births during that period, according to the study’s two authors, Melissa Kearney, the director of the Hamilton Project, a research group in Washington, and Phillip Levine, an economics professor at Wellesley College. The researchers say the rest of the decline can be attributed to economic factors associated with the Great Recession and to an ongoing trend toward fewer teen births.

Teen births fell particularly rapidly between 2008 and 2012 — an average of 7.5 percent per year.

Still, the U.S. has a higher teen birth rate than any other developed country, for which the rate is usually around 5 to 10 births for every 1,000 girls.

For their study, Kearney and Levine analyzed birth records, Nielson TV ratings, and Google and Twitter trends. They found that in areas of the country where “16 and Pregnant” was most popular, teen births fell the fastest after the show was launched.

They also found that in areas of the country where the show has its greatest number of viewers, Internet searches for “how to get birth control pills” and Twitter tweets about “birth control” and “abortion” increased significantly within 48 hours after the airing of each episode.

Information about the rate of teen abortions in areas of high viewership for “16 and Pregnant” during the 18 months of the study is not yet available, but data does show that abortions, like births, among all U.S. teenagers were decreasing during that period. For this reason, the authors believe that the decline in births that showed up in their study is most likely due to a decrease in pregnancies rather than an increase in abortions.

“Our findings suggest that MTV’s ’16 and Pregnant’ franchise connected with teens who were at risk of teen childbearing, presenting stories that led them to change their behavior,” write Kearney and Levine in a commentary piece that ran on the Huffington Post website Monday. “In previous work, we have argued that limited economic opportunities for economically disadvantaged young women are responsible for the high rates of teen childbearing in the United States. We reasoned that teens see the immediate benefits of a baby — someone to love and care for — but face limited long-run costs. Many will therefore ‘choose’ to become teen moms.” 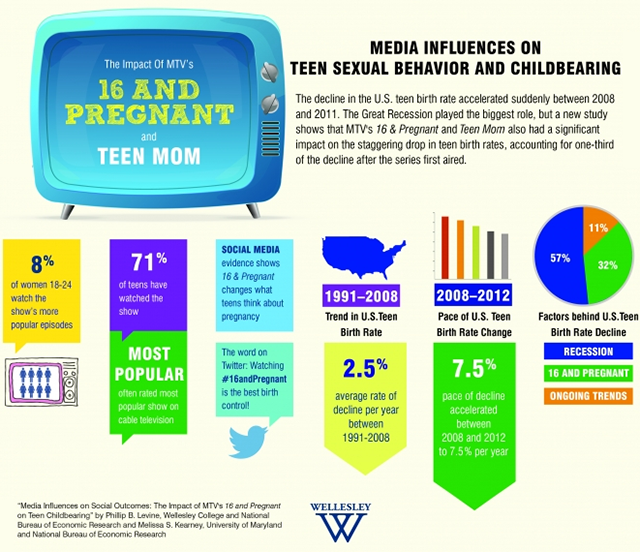 “But ‘16 and Pregnant’ appears to make immediate costs palpable to potential teen moms,” the researchers add. “The show’s stories resonate with teens, highlighting the realities of relationship stress, unsupportive boyfriends, restricted social lives, friends that move on and relentless sleep deprivation, among other challenges. The show makes real what some would-be teen moms might otherwise fail to see — that becoming a mom is not a way out but brings its own hardships and struggles. In that, the show may represent a highly effective form of sex education and, as reflected in the twitterverse, a great method of birth control.”

This study is not the last word on this issue, however. Another study, soon to be published in the journal Mass Communication and Society, has found that shows like “16 and Pregnant” and “Teen Mom” actually lead frequent viewers to believe — unrealistically — that young moms have a fairly high quality of life.

The surveyed students, which included an almost equal number of boys and girls, came from schools that were demographically representative of the U.S. The median annual household income of the schools was $52,000, for example, and 80 percent of the students were white.

Martins and Jenson found, not surprisingly, that “16 and Pregnant” and its spinoff “Teen Mom” shows were much more popular among girls than among boys.

But they also found something more troubling.

“Watching these shows significantly predicted perceptions of what it is like to have a baby as a teenager,” the researchers write. “Counter to the assertions of program producers and supporters, however, heavy viewers of these programs were significantly more likely to think that teen mothers had an enviable quality of life, a decent income, and involved fathers than did lighter viewers of these shows.”

One of the factors behind this finding, they add, may be the celebrity status achieved by many of the shows’ teen moms, who appear regularly on the cover of gossip magazines and even on morning talk shows.

The main stars of the “Teen Mom” series are also paid more than $60,000 by the show’s producers.

“It is possible that teens are drawn to, or desire the celebrity status afforded to, these teen mothers and such celebrity makes a larger impression on viewers’ perceptions of the teen mom experience than does the real-life narratives featured on these programs,” Martins and Jensen write.

Of course, in real life (as opposed to reality-TV life) becoming a teen mom is often an economic disaster for the young mother and her child. As Martins and Jenson point out in their study, almost half of all teen mothers fail to earn a high-school diploma, and the average earnings of a teenage mom for each of the first 15 years after her baby is born is just under $6,500.

The study by Martins and Jenson is not yet available online, although you can read a detailed press release about the study here. The study by Kearney and Levine is available in full at this Wellesley College website.