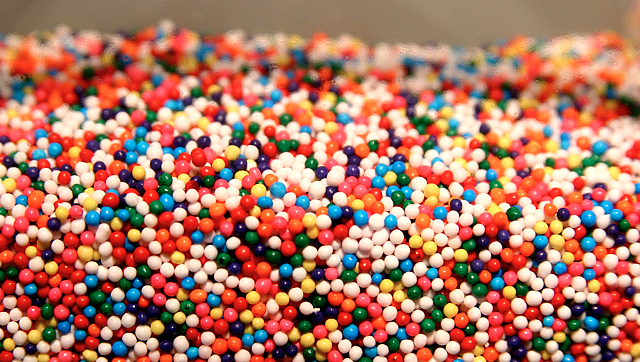 Perhaps it’s because of the endless sea of white outside my office window, but an article on “how color shapes our lives” caught my attention yesterday.

Writing online in the Atlantic magazine, science writer (and visual artist) Elijah Wolfson describes some of the more “valid empirical research on how color affects the human mind and behavior.”

And what those researchers have been finding is kind of interesting.

Some of our responses to color are, of course, driven by social constructs. Pink, for example, only became a “girly color” in the 1940s, when ad companies decided to sell it that way.

But other colors appear to elicit a more innate — and universal — response. Such is the case with the color red, which, as Wolfson points out, may “have the strongest hold on the human mind.” He explains why:

It was the first color to be used in artistic representation: By grinding ochre, a clay colored red by iron oxide, our Stone Age ancestors were able to add a deep brownish-red — not far from the color of blood — to the paintings in their cave dwellings.

Fast forward 400,000 years and now we send red roses and Valentine’s cards, put on red lipstick and skirts, and go to red light districts when the former strategies don’t work out. A University of Rochester team, led by professor of psychology Andrew Elliot and psychology graduate student Adam Pazda, has worked on a series of studies that have shown that women dressed in red are more attractive to men than women dressed in any other color.

Of course, it would be one thing if these results were culturally or geographically bound, but it turns out that the “come hitherness” of red cuts across peoples: In a 2012 study, Elliot and Pazda found that the red was equally powerful as an attractant in Burkina Faso — where the color actually carries explicitly negative connotations — as it is in the U.S. The discovery led the team to conclude that red “may operate as a lingua franca in the human mating game.”

But research also suggests that red serves throughout the world as a sign of dominance.

As an example, Wolfson points to a study conducted after the 2004 Olympics in Athens, which showed that competitors who wore red during certain combat sports were significantly more likely to win their matches than those not wearing red. (However, as I reported here a couple of years ago, a later study found that it was the judges of those meets, not the athletes, who were apparently affected by the red worn by the competitors.)

Scientists have a theory for why humans use red as a dual signaling tool. Writes Wolfson:

Most mammals, including most primates, are dichromatic, meaning they can only detect two color wavelengths: green and blue. Certain primates, though, have evolved to see a third: red. It turns out that these primates — humans, chimps, gorillas, and orangutans, to name some — all have one thing in common: bare-skinned faces. Based on this trend, experts have hypothesized that the development of trichromatic vision was, in fact, the result of an evolutionary advantage that certain primates had over others: namely, that it helped our ancestors better understand the emotional states, socio-sexual signals, and threat displays of their brethren.

The upshot was huge. Once we could actually see the red that coursed through our veins, it became a secondary communication tool: ovulating females would redden in the face and in their sexual organs to signal sexual readiness; angry males displayed dominance by reddening in the face. Modern humans might still get red in the face while angry, but we’ve also branched out to using signaling tools like cocktail dresses and soccer jerseys. While the medium has changed, the message remains: displaying red means you’re serious.

As Wolfson explains in his article, evolutionary biology may also explain why some studies have found that “exposure to the color green can enhance a person’s performance on creativity tasks; and blue light can make us more alert and perform at a higher cognitive level.”

The Japanese have found, he notes, that installing blue lights on train platforms reduced the number of suicides at those stations. Scientists don’t know exactly why the blue lighting discourages despondent people from throwing themselves under the trains, although they believe the lighting may help lift people’s moods, particularly on overcast days.

But “ultimately the meaning of color is messy,” Wolfson points out. “On one level, there seems to be some universal experience of the electromagnetic spectrum on living things, where short and long waves cause different effects to our being on the most basic level. But on another it is highly personal. Color doesn’t exist within a thing; it is the experience an outside agent has of the thing. The ocean gives off a clear set of wavelengths, but we all interpret them differently. The Greeks wrote odes to the ‘wine dark sea,’ and that sounds nothing like the Mediterranean I’ve seen.”

As I said, an interesting read on this monochronomic winter day. But a warning: It may intensify your yearning for the vibrant colors of spring.

Seeing red: The ‘messy’ meanings of how we see color