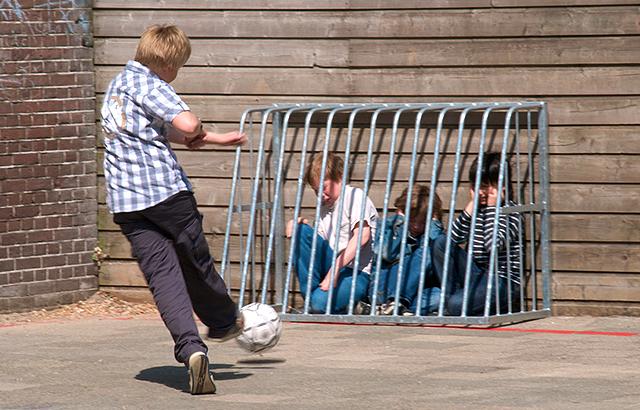 Creative Commons/Thomas Ricker
Among the children bullied in both the past and present, 44.6 percent scored in the lowest tenth of the children studied in regards to symptoms of depression and low self-worth.

Bullying is associated with long-lasting effects on children’s mental and physical health, according to a study published Monday in the journal Pediatrics.

Previous research has found strong correlations between bullying and poor physical and psychological health. But few studies have looked at whether the effects of bullying accumulate over time. This study did that. Using questionnaires, it asked 4,297 children from Birmingham, Los Angeles and Houston about their experiences with bullying and their physical and mental health at three different points in time: in fifth, seventh and 10th grades.

Overall, 30 percent of the children reported frequent bullying in one or more of the questionnaires. A child was considered bullied if he or she answered “about once a week” or “a few times a week” to one of six standard questions that are used to assess physical and emotional peer victimization. (Here’s an example of those questions: “How often did kids kick or push you in a mean way during the past 12 months?”)

The study, which was led by Laura Bogart of Boston Children’s Hospital, found that children who had experienced both past and present bullying scored significantly worse on measures of mental and physical health than children in any of the other groups, followed by the children who reported being currently bullied. But even children who had been picked on for a time in an earlier grade and then reported that the harassment had stopped were found to be in poorer health than those who had never been bullied.

This basic pattern held even after the researchers controlled for independent factors associated with depression, including chronic illness, weight and sexual orientation. (Sexual orientation was determined by answers provided in the 10th-grade questionnaires.)

By high school, however, the effect on physical health had weakened somewhat. Only 22.2 percent of the 10th-grade students bullied in both the past and present scored in the lowest decile.

It will take a village

The study, like all studies, has its limitations. Most notably, as Bogart and her colleagues point out, the study had an observational rather than experimental design, which means its results are evidence only of an association between bullying and ongoing poor health. They do not confirm that bullying causes poor health.

Still, “this study reinforces the importance of not only intervening early to prevent ongoing bullying but also continuing to intervene if necessary, even when bullying is not ongoing, to address persistent effects,” write Bogart and her colleagues.

The researchers call for more studies to develop “and rigorously test” evidence-based prevention interventions at all grade levels. And they call on pediatricians to be alert for symptoms of bullying and to refer children for mental health counseling as soon as the bullying is detected.

Physicians, along with parents, school officials and others, need “to provide a holistic response that both decreases bullying and strengthens youths’ resilience,” they stress.

You’ll find an abstract of the study on the Pediatrics website, but the full study is, unfortunately, behind a paywall.