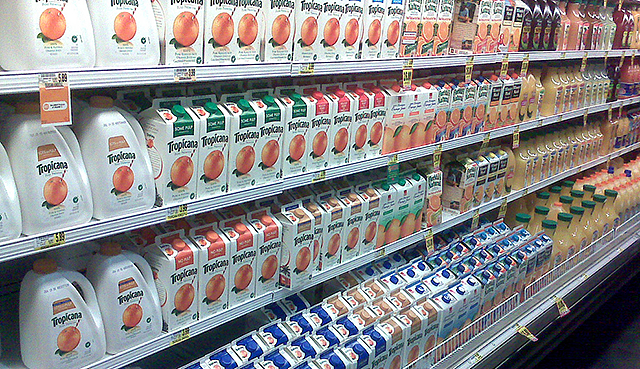 Creative Commons/manwithfaceAs many nutritionists now point out, the negative health consequences of the high amount of sugar in orange juice far outweigh any benefits from its vitamin content.

The history of how orange juice became mistakenly touted as a health drink is the focus of a recent article by reporter Adee Brown in The Atlantic.

It’s a remarkable tale of corporate-marketing ingenuity — and consumer gullibility.

And the fact that we’ve continued to believe the health claims about orange juice for almost a hundred years, long after they’ve been discredited, demonstrates just how difficult it is to change ingrained beliefs about dietary health.

As Brown points out, consuming oranges in any form became an urgent public health matter during the 1920s with the advent of “vitamania,” the idea, almost single-handedly popularized by the American biochemist Elmer McCollum, that everybody’s health is threatened by an insufficient amount of vitamins.

McCollum (who later became a paid spokesperson for many processed food manufacturers) “ignited a panic over a nebulous condition called acidosis: an excess of acid in the bloodstream which supposedly caused fatigue and lassitude,” explains Brown. “He claimed the ailment was brought on by consuming meat, eggs and bread, which were acid producers. His advice: Eat lots of citrus fruit and lettuce. These foods rather counterintuitively were transformed from acid into alkaline in the stomach.”

The California Fruit Growers Exchange jumped on this idea, of course, and quickly began extolling the daily consumption of oranges for their “health-giving” vitamins and “rare salts and acids,” as Harvey Levenstein explains in his book “Fear of Food: A History of Why We Worry About What We Eat.”

The growers were trying to sell orange juice during this period as well, but with less success. For, as Brown explains, before World War II, orange juice was boiled and canned. Needless to say, its taste didn’t catch on with consumers.

By 1934, acidosis as a widespread illness had been thoroughly debunked by scientists, so citrus fruit growers focused their health claims on vitamin C. But it wasn’t until after the war — with the invention of frozen concentrated orange juice — that sales of orange juice really took off.

“By 1949,” writes Brown, “Florida’s orange processing plants were churning out 10 million gallons of concentrated orange juice which was, rather deceptively, marketed as ‘fresh-frozen.’ Consumers finally had an affordable, ‘tasty,’ convenient and vitamin-C rich product, and they gulped it down.”

Throughout the 1950s, frozen orange juice was also touted as a way of saving housewives hours of “drudgery” in the kitchen. (No need to hand squeeze the oranges.)

“But the idea that something processed could also be ‘fresh,’ was provoking questions,” reports Brown. “By 1960 the FDA was becoming concerned with the misrepresentative ‘fresh’ labeling of commercial orange juice. Not only was it far from fresh, but sugar and water were being added. Federal standards and regulation ensued.”

Those concerns remained, however, even after the 1990s, when cartons of “not from concentrate” orange juice began replacing frozen concentrated orange juice on the grocery shelves.

“Most commercial orange juice is so heavily processed that it would be undrinkable if not for the addition of something called flavor packs,” writes Brown. “This is the latest technological innovation in the industry’s perpetual quest to mimic the simplicity of fresh juice. Oils and essences are extracted from the oranges and then sold to a flavor manufacturer who concocts a carefully composed flavor pack customized to the company’s flavor specifications. The juice, which has been patiently sitting in storage sometimes for more than a year, is then pumped with these packs to restore its aroma and taste, which by this point have been thoroughly annihilated.”

But orange juice has another problem, one that has nothing to do with how it’s packaged. As many nutritionists now point out, the negative health consequences of the high amount of sugar (fructose) in orange juice far outweigh any benefits from its vitamin content. It’s much, much better, they say, to get those vitamins by eating a whole orange. You’ll then ingest not only the fruit’s healthful nutrients, but also its healthful fiber, most of which is lost when the fruit is juiced.

In Britain, government health experts have begun warning people to swap their morning glass of orange or other fruit juice for a piece of the real fruit instead. They are also calling for fruit juices to be taxed.

But here in the United States, the negative health consequences of drinking too much sugary fruit juice doesn’t seem to be high on the list of concerns among government health officials, says Brown. Consumer concern does seem to be growing, however. Commercial orange juice sales are at their lowest level in 15 years.

Yet, millions of Americans continue to drink orange juice every morning with their cereal or eggs. “Though the acidosis scare may be long forgotten,” Brown writes, “most of us still like to think we can find health in a glass of orange juice — at least more health than in a can of soda.”

But “maybe,” she adds, “that classic breakfast isn’t so balanced after all.”

You can read Brown’s article on The Atlantic website.