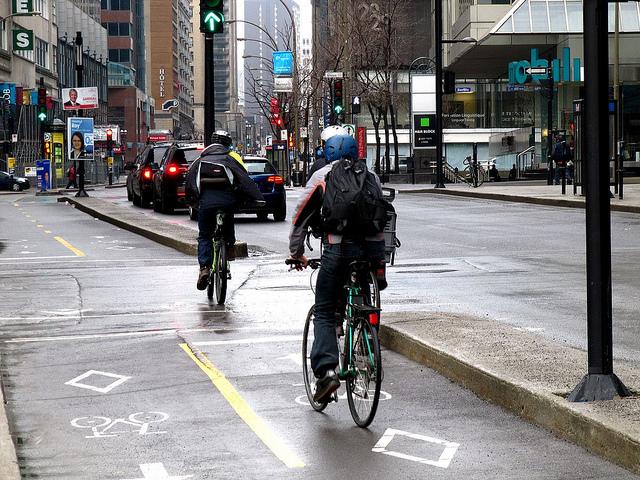 Are the health benefits of city cycling worth the hazards?

That’s the question explored in an article published last week in the online magazine Mosaic, a new science publication funded by the London-based Wellcome Trust.

For the article, science writer Lesley Evans Ogden cycled through seven European and Canadian cities (Paris, Copenhagen, London, Amsterdam, Toronto, Vancouver and Montreal), talking to everyday cyclists and experts alike. Her purpose: “to weigh up the risks and benefits of city cycling, and explore what can be learned where public health, urban design and transport engineering meet.”

“In cities across the world, researchers, planners and policy makers are examining the many potential plus points of cycling,” she explains. “Increasing the proportion of people who cycle or walk, rather than drive, could not only reduce air pollution and greenhouse gas emissions, but also lower people’s risk of developing a number of diseases. But at what cost? To what extent does cycling in cities expose you to the risk of injury or death? What makes some cities so much safer and attractive for cyclists than others?”

As Ogden points out, population-level studies have found that getting people out of cars and onto bicycles significantly reduces health-care costs — about $1,800 for each person with a 3-mile daily commute, according to one of the French experts she interviewed.

Other European researchers have come to similar conclusions. Writes Ogden (with British spellings):

Accounting for physical activity, exposure to accidents and air pollution, [a team of Danish researchers] found that the overall burden of disease — including heart disease, stroke, type II diabetes, breast cancer, colon cancer, cardiopulmonary disease and lung cancer — was reduced in people who cycled. The positive health effects of increased cycling were more than a third larger than the potential loss of health from bicycle accidents and air pollution. …

In a different study based in Copenhagen, researchers analysed data from over 13,000 women and 17,000 men to explore the impact of physical activity on mortality. Even after adjusting for other factors, such as physical activity in leisure time, they found that people who did not cycle to work experienced a 39 per cent higher mortality rate than those who did. In other words, cycling improved longevity.

Of course, not all converts to cycling live longer than if they had stayed in their cars.

“It’s important to point out,” writes Ogden, “that while fatal accidents might be reported as small ‘population-level costs’ in public health studies, they have tragic, catastrophic costs for individuals and their loved ones.”

The obvious solution is to make the environment for city cycling safer. “Unless you are travelling at breakneck speed … there is nothing inherently dangerous about cycling — it’s the environment you’re in that creates danger,” Ogden notes.

“Safety improves in a city as the total number of cyclists increases,” she said. “This effect has been seen in studies in Denmark, the Netherlands, 14 other European countries, Australia and 68 cities in California.”

“Motorist behavior probably contributes to this phenomenon,” she adds. “In places like Copenhagen — where four out of five individuals have access to a bicycle — most drivers are also cyclists, and so are accustomed to sharing public space with bicycles.”

Ogden also offers some fascinating — and surprising — history on why American cities are not (yet) as bike-friendly as many European ones:

In North America in the 1970s, cyclists — or at least the most vocal advocacy groups purporting to represent them — did not want to get out of the way. So-called vehicular cycling was emerging, a philosophy that has influenced transport policy in both North America and Britain. Fathered by Californian industrial engineer and cycling activist John Forester, vehicular cycling encourages cyclists to travel on the road in mixed traffic. On his website, Forester writes: “Vehicular cycling, so named because you are acting as the driver of a vehicle, just as the traffic laws require, is faster and more enjoyable, so that the plain joy of cycling overrides the annoyance of even heavy traffic.”

In 1970s California, lots of athletic cyclists were forming touring groups for riding fast on roads, explains Anne Lusk, a Research Scientist at the Harvard School of Public Health. Back then, she says, such groups may have legitimately feared that US adoption of Dutch-style cycle paths would restrict bike access to roads. “At the time, paths were becoming crowded by joggers, walkers, in-line skaters and baby-carriage pushers,” says Lusk, so cycling advocates fought forcefully against proposals for cycle paths.

The vehicular cycling philosophy became incorporated into US guidelines for transport design, and its influence was felt for decades, limiting the building of physically separated cycle tracks and putting cyclists on the road with cars. “It’s something that really stuck in North America,” says Meghan Winters, Assistant Professor in the Faculty of Health Sciences at Simon Fraser University, Canada. Asked if the philosophy of vehicular cycling is evidence-based, she says no. “But it’s something that was sticky and was adopted very broadly for very, very many years,” she adds.

From ‘impressive’ to ‘terrifying’

You’ll have to read the article to get Ogden’s cycling details about each of the seven cities she visited for this article, but she seems to have been particularly impressed with Cophenhagen, where cycling is considered more  a mode of transportation than a form of exercise — so much so that many Danes don’t even cite it when surveyed about being physically active.

Still, Ogden had her complaints about Cophenhagen as well.

“In rush hour in Amsterdam and Copenhagen, on some of the busiest cycle routes, I experienced that same sense of stress, congestion and defensiveness that I’ve so often experienced in bumper-to-bumper car traffic,” she says in a Q&A interview that ran with the article. “I saw some of the same bad behaviours one often sees from humans behind the wheel of a car: people trying to cut in and out, jackrabbits trying to race ahead of the crowd, and people impatient with the slower moving cyclists.”

The difference, she adds, is that ” in heavy, segregated bike traffic, you’re not breathing your neighbour’s fumes (unless of course they had extra beans for dinner). And there’s a sense of collective consciousness, connection and mutual understanding when you’re perched on a bike seat less than an arm’s length from your fellow travellers, without a large metal casing delineating your space.”

The two cities that Ogden seems to have felt the least safe as a cyclist were Toronto (“a hostile environment”) and London (“most terrifying”).

I wish she had come to the Twin Cities.

You can read the article in full on the Mosaic website.