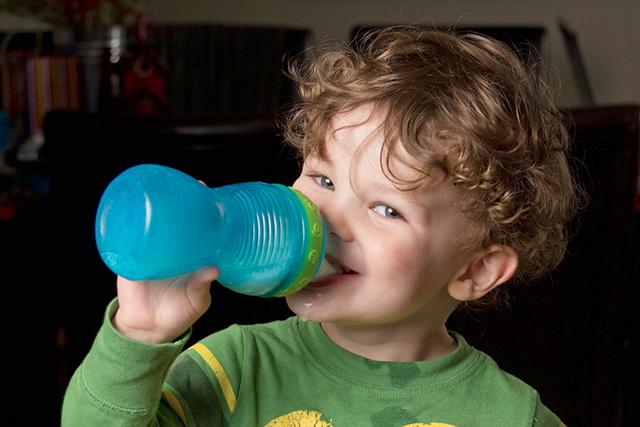 Creative Commons/Gordon
In 2012, the Food and Drug Administration (FDA) banned the use of BPA in baby bottles and children’s drinking cups.

The plastics industry is following Big Tobacco’s playbook in responding to public concerns about the safety of its products, according to an investigative article published in the March/April issue of Mother Jones magazine.

In fact, the plastics industry has even hired many of the same scientists, consultants and PR companies that were once on the payroll of the tobacco companies, writes Mother Jones reporter Mariah Blake.

The problem for the plastics industry started in the 1990s, when scientists began reporting that a common plastic additive, bisphenol A (BPA), mimics the hormone estrogen. BPA has been subsequently linked, mostly in animal studies, to a variety of medical conditions and brain-development problems, including cancer, diabetes, obesity, early puberty, learning disabilities, hyperactivity and aggression.

In 2012, the Food and Drug Administration (FDA) banned the use of BPA in baby bottles and children’s drinking cups. To appease concerned consumers, companies that make other types of plastic products, especially ones used by children, quickly switched to “BPA-free” formulations.

But, as Blake points out in her article, research has shown that many of those “BPA-free” substitute products also have estrogenic qualities, and therefore may be just as dangerous to human health.

An attempt to get answers

One of the scientists leading the research into the estrogenic activity of different types of plastics is George Bittner, a professor of neurobiology at the University of Texas in Austin.

In the late 1990s, Bittner decided that BPA and other endocrine-disrupting chemicals were “the most important public health issue of our time.” He subsequently launched, with the help of a $91,000 grant from the National Institutes of Health (NIH), two small companies — CertiChem, which tests plastics for synthetic estrogens, and PlastiPure, which identifies and develops non-estrogenic alternatives.

Bittner told Blake that he hoped to use these companies to raise awareness about endocrine-disrupting chemicals and to encourage the government to regulate them better. Very few of the 80,000 chemicals on the market today have undergone any kind of safety testing.

Of course, no matter what Bittner’s overall motives were for starting the companies, their existence means that he is not a totally financially disinterested player in this story. But those companies — particularly CertiChem’s ability to run tests on existing products — also pose a potentially huge financial threat to the plastics industry.

Start of ‘a bitter fight’

In 2011, Bittner co-authored a paper in the NIH journal Environmental Health Perspectives that reported that most (72 percent) of 455 different types of plastic food containers leached synthetic estrogens.

In other words, they potentially posed the same health risks as BPA-containing products.

“Those startling results set off a bitter fight with the $375-billion-a-year plastics industry,” writes Blake.

The American Chemistry Council, which lobbies for plastics makers and has sought to refute the science linking BPA to health problems, has teamed up with Tennessee-based Eastman Chemical — the maker of Tritan, a widely used plastic marketed as being free of estrogenic activity — in a campaign to discredit Bittner and his research. The company has gone so far as to tell corporate customers that the Environmental Protection Agency (EPA) rejected Bittner’s testing methods. (It hasn’t.)

Eastman also sued CertiChem and its sister company, PlastiPure, to prevent them from publicizing their findings that Tritan is estrogenic, convincing a jury that its product displayed no estrogenic activity. And it launched a PR blitz touting Tritan’s safety, targeting the group most vulnerable to synthetic estrogens: families with young children. “It can be difficult for consumers to tell what is really safe,” the vice president of Eastman’s specialty plastics division, Lucian Boldea, said in one web video, before an image of a pregnant woman flickered across the screen. With Tritan, he added, “consumers can feel confident that the material used in their products is free of estrogenic activity.”

Eastman’s offensive is just the latest in a wide-ranging industry campaign to cast doubt on the potential dangers of plastics in food containers, packaging, and toys — a campaign that closely resembles the methods Big Tobacco used to stifle scientific evidence about the dangers of smoking. Indeed, in many cases, the plastics and chemical industries have relied on the same scientists and consultants who defended Big Tobacco. These efforts, detailed in internal industry documents revealed during Bittner’s legal battle with Eastman, have sown public confusion and stymied US regulation, even as BPA bans have sprung up elsewhere in the world. They have also squelched debate about the safety of plastics more generally. All the while, evidence is mounting that the products so prevalent in our daily lives may be leaching toxic chemicals into our bodies, with consequences affecting not just us, but many generations to come.

As Blake notes, Eastman won its lawsuit against Bittner, causing him to lay off half his staff at CertiChem and PlastiPure. The judge in the case, writes Blake, “upbraided both sides for failing to explain the science in terms jurors could understand.” But he also barred Bittner’s companies “from ever talking about their Tritan findings, at least in a commercial setting.”

Meanwhile, reports Blake, the plastics industry “has revived its campaign to downplay the dangers of BPA.”

A month after the Eastman case concluded, the American Chemistry Council relaunched its pro-BPA website, FactsAboutBPA.org. The section on infant health suggests that BPA isn’t harmful, even to premature babies. “They’re reverting back to exactly the arguments they were making in 1998,” says [University of Missouri biologist Frederick] vom Saal. “It’s as if the last 15 years didn’t happen.”

US regulators also have continued to ignore the mounting evidence linking BPA and similar chemicals to human disease, even as bans have cropped up around the world. Although more than 90 studies examining people with various levels of exposure suggest BPA affects humans much as it does animals, the FDA recently announced that its research “supports the safety of BPA” in food containers and packaging.

And the EPA program that was supposed to screen some 80,000 chemicals for endocrine disruption hasn’t fully vetted a single substance. In 2010, the agency sought White House approval to add some endocrine-disrupting chemicals that are commonly found in plastic —among them BPA, phthalates, and a class of compounds known as PBDEs — to its “chemicals of concern” list because it found they “may present an unreasonable risk to human health.” This would have required chemical makers to share safety-testing data with federal regulators. The proposal languished until last September, when the EPA quietly withdrew it, along with a proposed rule requiring manufacturers to disclose safety data on chemicals in their products.

Last month, the FDA published new findings that showed bisphenol A does not affect the health of rats that are fed low doses of the chemical. But, as  Environmental Health News reports, “scientists not affiliated with the study said that the findings are flawed.”

FDA scientists didn’t look for all relevant health impacts, such as effects on the developing brain. Also, the experiment lasted for 90 days, so it is unknown if the rats’ health was affected later in life. Some effects, such as altered glucose levels, might occur after continuing exposure. In addition, critics said that the findings are skewed because all the rats in the study — even those that were supposed to be unexposed controls — had BPA in their bodies.”

The study also used a strain of lab rat that has been shown in other research to be insensitive to synthetic estrogens.

You can read the Mother Jones article in full on the magazine’s website. It is accompanied by several side articles, including “A Frightening Field Guide to Common Plastics” and “Which 9 Household Items Will Make Your Hormones Go Haywire.”