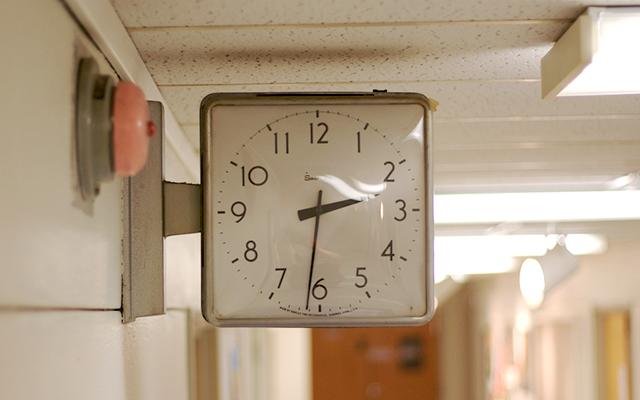 Creative Commons/David Joyce
An 8:55 a.m. start time enabled 66 percent of the students to get at least eight hours of sleep — the minimum amount recommended for high-school-aged teens.

When high schools switch to later start times, student health and grades improve, according to a University of Minnesota study released Thursday.

The study also found a link between later school start times and a reduction in car crashes involving teens.

Moving back the starting hour did not appear to reduce the amount of time students spent engaged in after-school sports and other activities — a reason frequently cited by school districts for not making the change.

“We now have conclusive proof that this has a positive impact on students,” Kyla Wahlstrom, director of the university’s Center for Applied Research and Educational Improvement, said in a phone interview with MinnPost on Wednesday.

Began in Edina and Minneapolis

Most of these findings were already known to Wahlstrom and her colleagues, who began studying the topic in the 1990s after both Edina and Minneapolis shifted their high schools to a later start time (8:30 a.m. in Edina, and 8:40 a.m. in Minneapolis).

“We found remarkable changes,” said Wahlstrom. “Kids being awake in class. Parents saying their kids were easier to live with. Teachers saying student behavior in the classrooms and the hallways had improved.”

But questions have arisen as to whether the later start times really had a significant impact on academic achievement. A 2010 study that used Minneapolis data found, for example, that later start times did not improve student scores on the ACT college admission exams.

The university’s new study, which was funded by a grant from the Centers for Disease Control and Prevention (CDC), set out to answer those questions. Wahlstrom and her colleagues gathered data from more than 9,000 students attending eight public high schools in three states. All had changed their start times in recent years. Before the switch, most had begun their classes around 7:30 a.m. The new start times ranged from 8:00 a.m. to 8:55 a.m.

Five of the schools were in Minnesota (St. Louis Park High School, Mahtomedi High School, and Woodbury, Park and East Ridge high schools in South Washington County), two were in Colorado (Boulder and Fairview high schools), and one was in Wyoming (Jackson Hole High School).

Sleep is, of course, essential for good physical and mental health. So it’s also not surprising that teens in the study who reported getting at least eight hours of sleep per night were, as Wahlstrom and her colleagues write, “more likely to say they have good overall health and were less likely to report being depressed or using caffeine and other substances (e.g., alcohol, tobacco, other drugs). Other positive findings include a significant reduction in local car crashes, less absenteeism, less tardiness, as well as higher test scores on national achievement tests.”

Grades also tended to improve, although the overall effect was small and not always consistent. At Mahtomedi High School, for example, there was a significant increase in third-period English grades after the switch to a later start time — but only in the first quarter of the year, when the average grade rose from 2.89 to 3.13. By the fourth quarter the average grade was back down to 2.89.

Wahlstrom did not have readily available yesterday detailed numbers for the improved health outcomes. She said those numbers may be added to the next version of the written report.

The study also found that car crashes involving teen drivers dropped a stunning 70 percent in Jackson Hole after its high school shifted to an 8:55 a.m. start time (the latest start time of the eight schools in this study).

Car crashes around Mahtomedi High School fell an equally dramatic 65 percent after it shifted to an 8:20 a.m. start time.

Wahlstrom believes these discrepancies may be explained by the fact that crash data “is kept by the community, not by the school.” It’s highly likely, she said, that some of the students involved in car crashes on the highways around St. Louis Park High School attended other schools in the metropolitan area. That is much less likely to be the case, she added, on the roads around Mahtomedi High School and especially on those around Jackson Hole High School, which is the only high school in a 200-mile radius.

Of course, the design of this study enables it to show only a correlation, not a cause-and-effect, between later school times and fewer car crashes involving teenagers. Many other factors — differences in weather patterns from one year to the next, for example — might also explain the drop.

Dozens of school districts across the country have switched to later high school start times. Yet, as the new U of M report acknowledges, the idea continues to be resisted in other districts, often with claims that today’s teenagers are just “lazy” and undisciplined.

“There’s a lot of pushback from people saying we are coddling these teenagers, and that they don’t know what real life is like,” said Wahlstrom.

Sleep science tells a much different story. Recent research has shown that the “tipping point” for teenagers in terms of sleep and health is eight hours. If they routinely get fewer than eight hours of sleep a night, they are more likely to make unhealthful choices about drugs, alcohol, smoking and sex. They are also more likely to show signs of depression.

Once children enter puberty, their biological clock shifts, including the time at which the pineal gland in their brain releases melatonin, the hormone that induces sleep.

“Their bodies don’t start secreting melatonin until around 10:45,” said Wahlstrom. “That means the earliest they would be waking up is around 7 a.m. So if you have a school that starts at 7 a.m., that doesn’t work.”

You can download and read the full study at the website for the university’s Center for Applied Research and Educational Improvement.