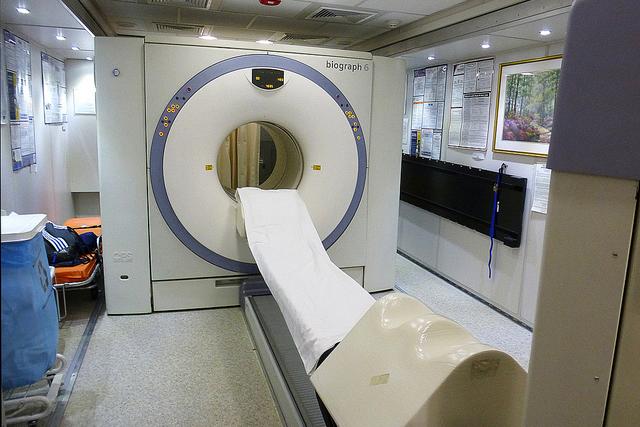 A commentary published this week in the journal JAMA Internal Medicine offers a fascinating glimpse at how and why the U.S. health-care system leads the world in overdiagnosis and overtreatment.

The commentary is written by Dr. Susan Molchan, who is currently a private-practice psychiatrist in Bethesda, Md., but who also has practiced nuclear medicine — and conducted research in that field for the National Institutes of Health. Nuclear medicine physicians perform and interpret the results of a variety of nuclear medicine tests, including positron emission tomography (PET) scans.

It was because of her expertise in PET scans — and in Alzheimer’s disease — that Molchan found herself at a “late-breaking, special” session at the Alzheimer’s Association’s International Conference (AAIC) (the world’s largest medical meeting on that disease) in Boston last summer.

That session, writes Molchan in her commentary, “starkly epitomized what looks to be evolving into the latest campaign for overdiagnosis.”

A lack of evidence

The session focused on a decision made earlier in 2013 by the Centers for Medicare and Medicaid Services (CMS). That government agency had turned down the pharmaceutical industry’s request that Medicare cover the costs of a new medical imaging technology — one that the industry claims will lead to better treatments for people with dementia.

“The US Food and Drug Administration (FDA) had approved the first drug/tracer to light up amyloid, for use with [PET] scans, the year before,” explains Molchan. “Many people were promoting the scans (price tag $3000-$4000) despite the lack of evidence that they did anything for patients. ‘The scan does not establish a diagnosis of Alzheimer’s disease (AD) or other cognitive disorder,’ the label specifies; it is used as part of a diagnostic evaluation.”

Amyloids are pieces of protein that can clump together in the brain to form plaques, which are associated with Alzheimer’s disease.

“One of the problems with amyloid PET scans,” Molchan adds, “ is that they can glow just as brightly in someone with a normal brain as in someone with dementia. About 30% of elderly brains with no symptoms of dementia light up.”

With the clinical usefulness of the amyloid PET scans not established, the CMS wisely chose, says Molchan, not to ask taxpayers to pay for the tests — except in two limited circumstances. CMS authorized payment for scans used in research studies. The government would also foot the bill in unusually complicated cases in which the scans might help physicians differentiate Alzheimer’s disease from another form of dementia.

As a JAMA Internal Medicine editor wrote at the time of the CMS decision: “This approach serves the public interest. It would be irresponsible for the CMS to cover amyloid PET imaging without adequate evidence about its role in [Alzheimer’s disease] or other neurodegenerative diseases.”

Needless to say, the pharmaceutical and imaging communities were not pleased. And that brings us to the special session at last summer’s AAIC meeting. Here’s Molchan’s description of that gathering:

[I]t was a familiar cast of characters: pharmaceutical and imaging company executives and staff members, lobbyists, staff members from the Alzheimer’s Association and other advocacy foundations, and academics, many of whom were funded by pharmaceutical companies as consultants and/or for research support.

Speakers such as Gail Rodriguez, PhD, president of the Medical Imaging and Technology Alliance, extended heartfelt thanks to their partners in indignation against CMS officials whose “anti-moral ruling,” according to Michael Devous, PhD, served as “disincentive to provide new technology to advance patient care.” (Dr. Devous is professor of radiology at University of Texas Southwestern Medical Center and has stated financial interests with developers of both primary amyloid imaging drugs, Lilly, and GE Healthcare.)

Although “cooler heads … with less directly connected wallets” suggested during the session that CMS was asking “the right questions about the economics of health care and treating with appropriate seriousness the question of outcomes,” the other participants — the ones furious with CMS — dominated the meeting, writes Molchan.

The industry representatives and their supporters talked about how they would attempt to get CMS to reverse its decision. “Proposed strategies included applying pressure on CMS officials through members of Congress and senior officials at the Department of Health and Human Services, igniting a grassroots campaign, and finally conducting studies to collect evidence on outcome,” writes Molchan.

She believes these efforts are misguided and a waste of valuable resources.

“Ironically, as the troops are being marshaled to target our cognitively impaired elderly patients with more scans, brightening the visions of blockbuster drug sales to our growing senior population, evidence is accumulating that dementia rates, that is ‘age-specific prevalence or incidence rates among people born later in the first half of the 20th century,’ are dropping,” she writes.

Experts believe this drop is associated with a more educated public and more effective treatments for the prevention of stroke.

Stroke rates have been dropping for many years, primarily as a result of better treatments for high blood pressure. In fact, the decline in the incidence and death rates from stroke has been called “one of the greatest public health achievements of the 20th and 21st centuries.”

Advocates who want to reduce the ravages of dementia should therefore focus greater resources on public-health efforts that emphasize stroke-reducing lifestyle interventions and that promote educational opportunities, both early and later in life, argues Molchan.

“Impressive as scanning technologies are, positrons are unlikely to light the path to healthy brain aging, but the horizon is brightening with knowledge that we have right now,” she says.