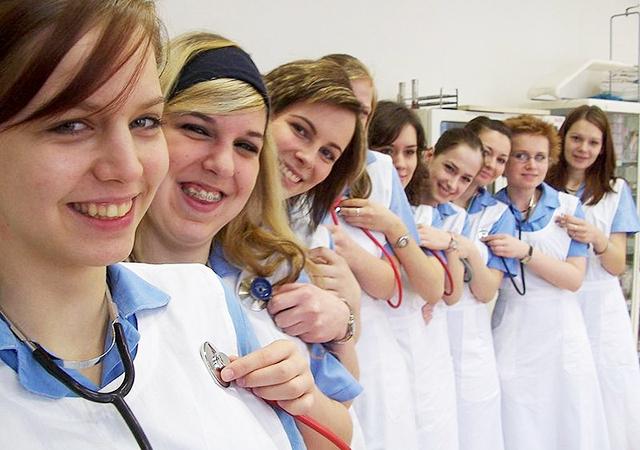 Creative Commons/OnCall Team
The study found that certain industries and occupations — including, ironically, those in the healthcare industry — are associated with higher obesity rates.

People who work long hours or in a hostile work environment are significantly more likely to be obese, according to a study just published in the American Journal of Preventive Medicine.

The study also found that certain industries and occupations — including, ironically, those in the health-care industry — are associated with higher obesity rates.

Identifying these work-related associations is important — if it leads to workplace interventions that help individuals reduce excess weight. Obesity has reached epidemic proportions in the United States (as well as in other developed nations), and is associated with numerous health problems, including an increased risk of heart disease, stroke, type 2 diabetes, certain cancers and liver and gallbladder disease.

For the study, researchers analyzed data collected from a nationally representative sample of more than 15,000 working adults who participated in the 2010 National Health Interview Survey. Almost 28 percent of the participants were obese (had a body mass index equal to or greater than 30). That was somewhat lower than the 36 percent of all American adults estimated to be obese in 2010 by the Centers for Disease Control and Prevention (CDC).

In the new study, younger workers (aged 18 to 29), Asian-Americans and people with college degrees had the lowest prevalence of obesity in the age, race/ethnicity and education categories. In addition, former smokers tended to be more obese than those who had never smoked, and, perhaps not surprisingly, those who met national physical activity guidelines or consumed fruits and vegetables more than five times daily were found to be less obese, on average.

In terms of the job and the work itself, people who toiled for more than 40 hours per week or who reported being exposed to a hostile work environment were more likely to be obese — even after adjusting for a variety of demographic and health-behaviors characteristics.

A hostile work environment was defined as such if the respondent answered “yes” to the following question: “During the past 12 months were you threatened, bullied or harassed by anyone while you were on the job?”

The study found no significant correlations between obesity and two other job-related factors: job insecurity and work-family imbalance.

The finding about the long work hours is consistent with that of previous studies, the researchers note. The more time spent at work, the less time available for physical activity and, perhaps, for making healthful food choices.

As for the finding about the hostile work environment, that may be related to the stress that such an environment can cause, the researchers say. People under stress tend to increase their calorie consumption.

It’s possible, however, that the obesity came first. In other words, workers who are already obese may be more likely to be harassed or bullied on the job.

The data also revealed that the industries with the highest obesity rates were 1) public administration, 2) utilities, 3) transportation and warehousing, 4) information and 5) health care and social assistance.

Once the researchers adjusted for demographic and other lifestyle factors, however, only two of those industries — public administration and health care and social assistance — retained a significantly higher-than-average association with obesity.

Public administrators may be more prone to obesity because their jobs are so sedentary. They spend a considerable amount of time sitting behind a desk. The finding about health-care workers is more surprising, although it somewhat supports the results of a 2012 study, in which 55 percent of nurses were identified as being obese. The authors of that study pointed to long hours, shift work and other “nonstandard” work schedules as possible contributors to the nurses’ increased risk of obesity.

The authors of the current study suggest that income may also play a role. Previous research has shown that doctors and other health-care workers at the higher end of the income level are much less likely to be obese than those at the lower end, such as hospital receptionists and billing clerks.

Finally, the researchers analyzed the data by job description. The jobs with the highest obesity rates were 1) protective services (such as policemen and security guards), 2) community and social services, 3) health-care support, 4) architecture and engineering, and 5) transportation and material moving.

But, again, after adjusting for demographic and lifestyle factors, only social service workers, public administrators and engineers had higher-than-normal obesity rates.

The authors of the study, who work at the National Institute for Occupational Safety and Health, recommend that public health officials and employers develop interventions that target long work schedules and workplace hostility as well as ones that encourage individual employees to eat more healthful foods and exercise.

Given that the United States is now “the most overworked developed nation in the world,” those changes would be welcome indeed.

You can read the study in full on the American Journal of Preventive Medicine’s website.