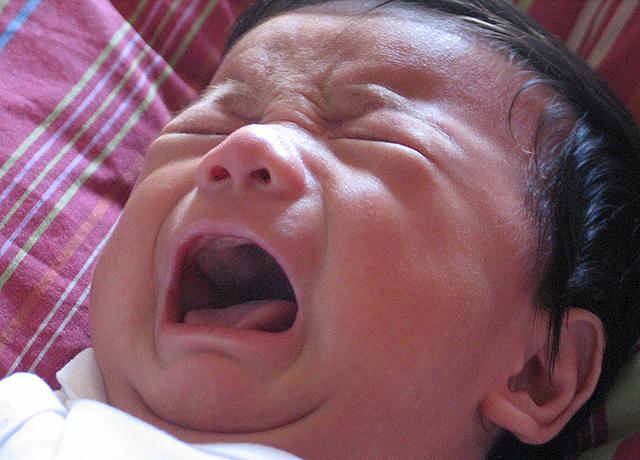 In fact, such supplements may actually make symptoms worse.

The findings counter previous and much smaller studies that reported that probiotics — specifically Lactobacillus reutieri — could help reduce crying in colicky babies. Those earlier studies, though, had significant limitations, particularly in how they selected the infants that were followed. (They included only breastfed babies, for example.)

The findings also differ from those reported earlier this year by a team of Italian researchers. That study found that giving all newborns probiotics supplements was associated with a reduced rate of fussiness and colic.

Infant colic — excessive and frequent crying of unknown cause in otherwise healthy babies — is extremely common. It affects up to 20 percent of all babies, making it a challenging problem for many parents. The cause of infant colic remains a mystery, despite many decades of research. It’s believed to be linked to the gastrointestinal tract, but even that idea has not been proven. All that’s really known for sure is that the symptoms tend to be gone by the time the baby is 5 months old.

During those months, however, a colicky baby can turn an already very tiring period of parenthood into one of great frustration and exhaustion. Indeed, research has found that mothers of colicky babies tend to be more anxious and depressed than moms of non-colicky babies. They also tend to end breastfeeding earlier. Infant colic is also associated with an increased risk of shaken baby syndrome.

Over the years, parents — and pediatricians — have tried all sorts of remedies to quiet colicky infants. Probiotics is among the latest of these. It’s based on the supposition that promoting microbial diversity in the gut will reduce the formation of gas and intestinal inflammation.

For the current study, a team of Australian researchers recruited 167 breastfed and formula-fed infants (all less than 3 months old) with colic. Each baby met the criteria of a commonly used diagnosis of infant colic: An infant who cries or fusses for three hours or more daily, three or more times a week, and for at least three weeks.

About half of the babies were randomized to receive daily supplemental drops of the probiotic L. reuteri for one month; the other half received a placebo. The study was “doubled-blinded” so that neither the parents nor the researchers knew which babies were in which group.

The parents were also instructed to keep a daily diary of their baby’s behavior, including such measurements as how long the baby fussed, cried and slept. Other outcomes were also followed and measured, including the mothers’ mental health and the families’ ability to function and have a “quality of life.”

In addition, the researchers collected stool samples from the babies to measure levels of gut bacteria and calprotectin (a marker of gut inflammation).

Instead, the study’s data revealed that the babies receiving the probiotics cried or fussed (mostly fussed) 49 minutes more, on average, than the placebo group, and they did so throughout the month.

The increased fussing occurred only in the formula-fed infants, however. The breastfed babies did not fuss more than the babies in the placebo group. (They did not fuss less, either.)

The two groups were similar in all other measurements, including how long the babies slept, the mother’s mental health, and the family’s quality of life.

Furthermore, being treated with L. reuteri had no effect on the levels of microbial diversity or calprotectin levels in the babies’ intestines.

The findings “do not support a general recommendation for the use of probiotics to treat colic in infants,” the study’s authors conclude.

‘The tincture of time’

In an editorial that accompanies the study, Dr. William E. Bennett Jr., a pediatric gastroenterologist at the Indiana University, warns parents and physicians against medicalizing normal infant behavior:

Fifty years ago, paediatrician Morris Green coined the term “The vulnerable child syndrome” to describe the far reaching family effects of a perceived threat to a child’s life. Since then many investigators have studied the effects of labeling a child as ill.

Tarini and colleagues have shown that labeling a normal, benign process as a disease (such as infant regurgitation) has a substantial impact on parents’ expectations for treatment, even if they are informed that the treatment is ineffective. This process has resulted in hundreds of thousands of prescriptions for acid suppressants in infants over the past decade, despite evidence that their use increases the risk of respiratory and gastrointestinal infections.

We should be careful not to walk this same road with probiotics and colic.

So what remedy should the parents of a colicky infant try?

“With such a dearth of good evidence, perhaps the more important questions is: ‘Should we be treating infant colic at all?’” writes Bennett. “A great deal of accumulated clinical experience tells us that children with colic incur no serious long term effects from the disorder, and that symptoms abate with time. The potential harm associated with diagnostic testing and treatment of infants is likely to surpass the harm from colic itself.”

“As the old adage goes, ‘babies cry,’” he adds. “Parents and their babies may be better served if we devote more resources to studying the interventions recommended long before the discovery of probiotics: reassurance, family social support, and the tincture of time.”

The study can be downloaded and read in full at the BMJ website.