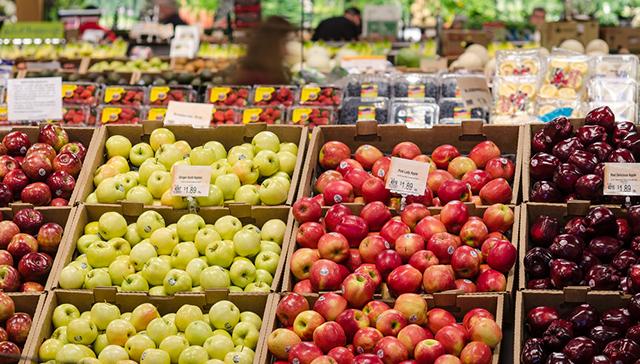 Creative Commons/U.S. Department of Agriculture
Apples once again topped the “Dirty Dozen” list, while avocados usurped asparagus for the “cleanest” spot on the “Clean Fifteen” list.

It’s an extremely useful tool for consumers who want to minimize their own — and their family’s — exposure to potentially harmful chemicals.

Apples once again topped the “Dirty Dozen” list, while avocados usurped asparagus for the “cleanest” spot on the “Clean Fifteen” list.

EWG researchers created the lists from the data that the U.S. Department of Agriculture (USDA) gathered in 2012 on tens of thousands of samples of 48 different kinds of fruits and vegetables. Some 65 percent of those samples tested positive for pesticide residues.

When the USDA released that testing data earlier this year, it said that 99 percent of those positive results involved residue amounts that were below the tolerance levels set by the Environmental Protection Agency.

But, as I’ve noted here before, the safety of those levels is highly contested, particularly in terms of their possible health effects on children. Concerns about those effects led the American Academy of Pediatrics (AAP) to issue a policy statement in 2012 that advised parents to educate themselves about the relative pesticide content of various foods — including using the EWG’s lists — and then to shop appropriately. The AAP cited research linking early childhood pesticide exposure to “pediatric cancers, decreased cognitive function and behavioral problems.”

Both lists are very similar to last year’s. The 2014 “Clean Fifteen” list contains one new food: cauliflower. It replaced mushrooms, which moved to 16th place.

The only new addition to the “Dirty Dozen” list is imported snap peas. It took the place of hot peppers, which fell to 13th place.

Hot peppers are far from being off the environmental hot seat, however. They and leafy greens (particularly kale and collard greens) are members of the “Dirty Dozen Plus” category. These are foods that didn’t make the EWG’s top-12 list in terms of the highest number and concentration of pesticides, but which have been found to contain particularly toxic chemicals, such as organophosphates and carbamate insecticides.

The EWG report also includes the following findings from its analysis of the USDA data:

The EWG recommends that shoppers reduce their exposure to pesticides by avoiding the “Dirty Dozen” foods or by buying organic versions of those foods instead.

Indeed, a 2012 meta-analysis of 200 previous studies found that fruits and veggies grown organically are significantly less likely to contain pesticide residue than those grown conventionally.

But not everyone can find or afford organically grown produce, which is why the EWG and other environmental groups are urging governmental officials to adopt more rigorous standards for pesticide use on food crops. Two weeks ago, for example, the EWG asked the EPA to stop growers from using the pesticide diphenylamine (DPA), which is commonly used on apples to prolong their storage capacity, until its safety can be established.

In 2012, the European Commission banned the use of DPA on European-grown apples and pears, citing a lack of sufficient safety data.

You can read the full EWG report on the organization’s website. EWG also offers a free “Dirty Dozen” smartphone app that enables you to access both lists easily when you’re at the grocery store.