As if enduring the interminable cold and snowfall of last winter wasn’t bad enough for us Minnesotans. Now we learn that the thick layer of snow that was such a hassle to deal with during those long winter months will be making our spring and summer a bit more treacherous, too.

That’s because snow helps blacklegged ticks (aka deer ticks) survive frigid temperatures. And, of course, the more ticks that survive, the higher the risk of Lyme disease and other tick-borne illnesses.

So this may be a particularly bad year for tick-borne diseases, the Minnesota Department of Health (MDH) warned on Tuesday.

Last year, which also featured a long, snow-packed winter, was already a record one in the state for tick-borne diseases. In 2013, some 1,431 confirmed cases of Lyme disease were reported in Minnesota residents, up from 912 in 2012. There were also high numbers of cases of anaplamosis (627) and babesiosis (64), two other illnesses transmitted by blacklegged ticks.

This year, the risk of these diseases will remain high, said David Neitzel, a tick-borne disease specialist with MDH, in a phone interview with MinnPost. The period of highest risk, he added, is now through mid-July because it’s when the immature ticks, or nymphs, are most active.

“As soon as the snow melts, the adult stage of the ticks are out and active, and the adult females can transmit a whole long list of diseases,” Nietzel said.

The adult ticks, however, are large enough that most people can find and remove them from their bodies in time to prevent the transmission of disease. That’s not always the case with the nymphs, which are only about a millimeter in length.

“A lot of people never even know they’ve been bitten by one,” said Neitzel, “and therefore the tick is able to feed undisturbed for long enough to transmit whatever pathogens it has within its body.”

A matter of habitat

Blacklegged ticks are found almost exclusively in heavily wooded or brushy areas. That means that most city and suburban dwellers will not encounter the creatures in their backyards.

“For your average suburbanite who doesn’t have a wooded lot or who just has a few trees and maybe some bushes, the chances are extremely low that there is a viable population of ticks there,” said Neitzel. “But for people who have wooded lots, especially in the northern metro area — Anoka County, Washington County, northern Ramsey County — there is a pretty good population of ticks in those areas.”

And, of course, anybody who spends time on heavily wooded property elsewhere in the state is at risk of becoming host to a disease-carrying tick. 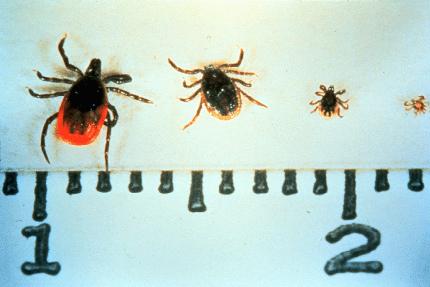 Minnesota Department of Health
The blacklegged tick is much smaller than the wood (or dog) tick.

Few areas of the state are free of the risk, Neitzel stressed.

“And there’s been an expansion on the other side of the state, down in southeastern Minnesota, along the Mississippi River Valley,” he added.

Changing climate conditions may have something to do with this expansion, said Neitzel.

“The ticks are probably being introduced into new areas all the time,” he explained. “They get carried in on white-tailed deer — at least the adult ticks do. And the immature ticks get carried in on smaller animals, especially birds. It’s just a matter of whether the ticks drop off in conditions that allow them to survive or not.”

“I think the weather conditions we’ve had in the last 15 or 20 years here have really facilitated the survival of ticks in new areas,” he added.

The MDH recommends that people who intend to spend time outdoors in tick habitat use either a DEET-based or a permethrin-based repellent.

“I think that if DEET is used according to label directions, the risks from it are extremely low,” said Neitzel. “It has a very good safety profile.”

You should also check for ticks after spending time outdoors. Search your entire body, and remove the tick immediately.

If you do become infected with Lyme disease or another tick-borne illness, it’s important to seek treatment (usually antibiotics) as soon as possible.

“If you come down with any illness within a month of being out in the woods, especially an illness with a rash or a fever or muscle or joint aches, get checked out by a doctor,” said Neitzel.

You’ll find more information about the signs, symptoms and prevention of tick-borne diseases (including Rocky Mountain spotted fever, which is caused by American dog ticks, or “wood ticks”) on the MDH website.