For the second year in a row, Minnesota has been declared the healthiest state for people aged 65 and older by the Minnetonka-based United Health Foundation (UHF).

To come up with the rankings for its 2014 “America’s Health Rankings Senior Report,” which was released Wednesday, UHF analyzed data gathered from more than a dozen government agencies and research organizations on 34 measures of health, including access to dental care, physical activity rates, obesity rates, prescription drug coverage, food insecurity, and percentage of quality nursing home beds.

Hawaii was ranked second, followed by New Hampshire, Vermont and Massachusetts. The state that trailed the nation in the overall health of its older residents was Mississippi. The next lowest-ranked states were Louisiana, Kentucky, Oklahoma and Arkansas.

And any Minnesotans who have been thinking about retiring to Florida (perhaps to avoid taxes?) may want to consider that state’s ranking: 28th.

According to the UHF report, last year Minnesota had

The state had high scores in many other categories as well, including 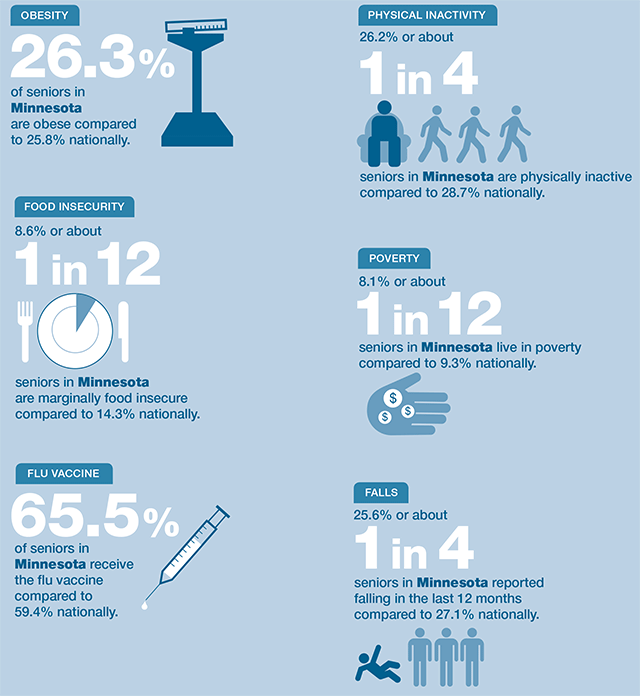 But, as the report also points out, Minnesota continues to face many challenges in terms of the health of its older residents. For example, the obesity rate among Minnesotans aged 65 and older increased from 23.7 percent in 2013 to 26.3 percent in 2014. We’re now ranked 24th on that measure.

In addition, Minnesota is listed 37th in the “community support” category. The state spends $542 per adult aged 65 and older who is living in poverty. That compares with $8,033 dollars that the top-ranked state, Alaska, spends on each of its impoverished older adults.

In fact, the economic disparity in health among Minnesotans aged 65 and older is quite glaring. The UHF report notes that 59.2 percent of the state’s older residents with a college education report being in excellent or very good health. That compares to only 25.2 percent of those with less than a high school education.

You can download and read the 112-page report from the United Health Foundation website. The foundation was established in 1999 by the health-insurance company UnitedHealth Group.

Minnesota keeps No. 1 ranking as healthiest state for older adults