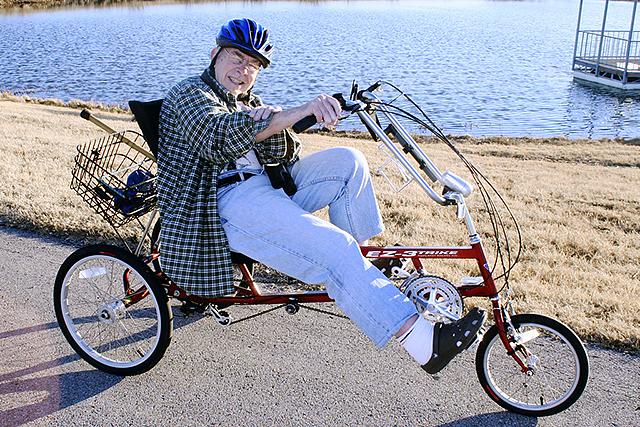 People in their 70s and 80s who take part regularly in a moderate-intensity exercise program that involves walking, resistance training and stretching are less likely to become physically disabled, according to new research published online Tuesday in the Journal of the American Medical Association (JAMA).

The reduced risk was small but significant, especially given the rapid aging of the U.S. population. The number of Americans aged 65 and older is expected to grow to 72 million in 2030, or 20 percent of the country’s entire population. That’s more than double what it was (35 million) in 2000.

One of the fastest growing demographics in the country is people aged 85 and older. The number of people in that age cohort is expected to reach 19 million in 2050, more than triple its current number (5.8 million).

Even a small reduction in physical disability risk among a large population can have a significant positive effect — for individuals as well as for the broader society. Physical mobility, which this new JAMA study defines as the ability to walk without assistance, is, after all, critical for healthy aging and functional independence.

And, yes, at first glance this may seem like a “duh” study, but as its authors point out, the study is actually the first one to conclusively test whether physical activity can prevent or delay problems with mobility in older adults. Most previous studies have been observational — that is, they have shown only a correlation between physical exercise and a greater mobility among older adults.

The current study, however, was a large randomized controlled trial, which is designed to help determine causation. Furthermore, the study involved older people who started out at high risk of becoming unable to walk without assistance. Such people are often excluded from clinical trials.

For the study, researchers at eight universities and research centers across the country (none in Minnesota) recruited 1,635 men and women aged 70 to 89. All of the participants were sedentary (had not exercised regularly for more than 20 minutes a week during the past month) and scored below 9 on a 12-point physical-functioning scale frequently used to test the mobility of older adults. They could, however, walk 400 meters (about a quarter of a mile) in less than 15 minutes without sitting, leaning or using a walker. (Using a cane was OK.) In addition, none had a major cognitive problem.

The volunteers were then randomized to two groups. One group (818 of the participants) was given an individualized physical-activity program that involved walking (with a goal of 150 minutes per week), as well as strength, flexibility and balance training. Twice a week, they visited a center to exercise. The rest of the exercising was done at home. No special equipment was required.

The other group (817 of the participants) attended workshops that focused on successful aging. The workshops ran weekly for the first 26 weeks. After that, the participants could go either monthly or bimonthly until the end of the study. The topics included such things as how to eat nutritiously, how to negotiate the health care system effectively and which preventive screenings are recommended for older people. Physical exercise was not discussed, although each workshop began with 5 to 10 minutes of upper-body stretching.

Every six months, all the participants had their physical mobility assessed, including their ability to complete the 400-meter walking test.

Participants were followed for an average of 2.6 years. (The study ended last December.) When all the data was analyzed, the researchers found that the people in the exercise group were 18 percent less likely than those in the education group to have experienced a major episode of physical disability that made them temporarily unable to walk the full 400 meters unassisted. And they were 28 percent less likely to have experienced a persistent disability or a major disability episode followed by death.

In absolute numbers, the differences were not that great, however. For example, 246 of the exercise participants (30.1 percent) and 290 of the health education group (35.5 percent) were disabled (unable to walk the 400 meters) at some point in the study. And 120 participants in the exercise group (14.7 percent) experienced persistent disabilities compared with 162 (19.8 percent) in the education group.

As one expert who was not involved in the study told New York Times reporter Gretchen Reynolds, the size of that difference may be because the people who attended the education classes became motivated and began to exercise on their own.

In other words, the study’s control group may not have been representative of the more typical sedentary older person.

Surprisingly, engaging in regular exercise did not appear to reduce the participants’ hospitalization rate. In fact, people in the exercise group were hospitalized slightly more often (404 participants, or 49.4 percent) than those in the education group (373 participants, or 45.7 percent) during the course of the study. The study’s authors point to several possible explanations, including the fact that people in the exercise group were being seen more often by professional staff, which may have led to a higher rate of recognition of health problems.

The study can be read in full on the JAMA website. On the site, you can also watch a video about the study, which includes interviews with some of its participants.