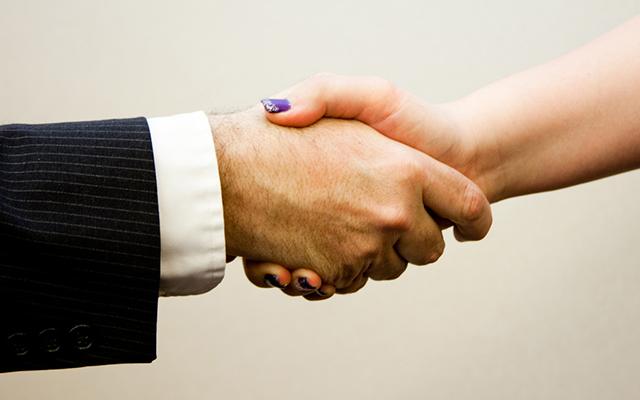 Creative Commons/Flazingo Photos
Although the alcohol-based hand sanitizer gels are ubiquitously placed throughout most hospitals and clinics, research has shown that health-care personnel use them only about 40 percent of the time.

Should our hospitals and medical clinics become “handshake-free zones”?

The issue should at least be studied and discussed, according to two University of California, Los Angeles (UCLA) pediatricians and a medical student in a commentary published last week in the Journal of the American Medical Association (JAMA).

Hands are major vectors of infection, Dr. Mark Sklansky, Dr. Lynn Ramirez-Avila and Nikhil Nadkarni point out, and although alcohol-based hand sanitizer gels are ubiquitously placed throughout most hospitals and clinics, research has shown that health-care personnel use them only about 40 percent of the time. (Patients and visitors use them even less.) In addition, the gels have only limited effectiveness against some pathogens, including Clostridium difficile, a bacterium that causes a dangerous form of diarrhea.

Thus, regulations may be needed to restrict handshakes in health-care settings, along with more aggressive efforts to get compliance with existing hand-hygiene programs, propose Sklansky, Ramirez-Avila and Nadkarni.

Of course, discouraging handshakes will not be easy, given their ingrained role in our Western culture.

“Artifacts from ancient Greece suggest that the handshake began as a general gesture of peace, revealing one’s open palm as a symbol of honesty and trust,” the authors of the commentary note. “The custom and technique of this open-palm gesture subsequently evolved into the modern form of the handshake, now representing an international symbol of greeting/departure, reconciliation, respect, friendship, peace, congratulations, good sportsmanship, or formal greeting.”

No wonder, then, that patient encounters in the health-care setting commonly begin and end with a handshake between physician and patient.

“The handshake has been shown to have the capability of improving the perception of the physician’s empathy and compassion,” Sklansky, Ramirez-Avila and Nadkarni write. “Handshakes between healthcare practitioners and their patients have the potential to comfort and to calm.”

Given the pervasiveness of the handshake in our culture, any effort to restrict it will require widespread media and educational efforts — and perhaps the development and promotion of an alternative form of greeting.

Such alternatives already exist, of course, as the commentary’s authors point out:

Some well-established gestures include the familiar hand wave (using an open palm, and practiced widely as an informal greeting/departure gesture) and placement of the right palm over the heart (as practiced in the United States while facing the American flag).

Practiced predominantly in the Far East, the bow symbolizes reverence and respect but can also have a variety of secular/religious meanings and may signify greeting/departure, humility, obedience, submission, apology, or congratulations.

The Namaste gesture, practiced for centuries throughout South Asia, has become increasingly prevalent in yoga practice throughout the world. By placing the hands, palms together against the face or chest and tilting the head forward, the gesture symbolizes respect and may carry religious significance among Hindus and Buddhists. In Thailand, the wai gesture functions similarly.

The salaam (peace) gesture — wherein the right palm is placed over the heart, sometimes with subtle bowing — has been practiced among some Muslims and generally represents a symbol of greeting/departure and respect.

Would Americans adopt such “foreign” methods of greeting? I have my doubts. (I can already hear some TV pundits railing against the un-Americanism of these other forms of greeting.)

But, as Sklansky, Ramirez-Avila and Nadkarni point out, we should at least consider banning the handshake in medical settings, whether we adopt some kind of substitute or not.

“Given the tremendous social and economic burden of hospital-acquired infections and antimicrobial resistance, and the variable success of current approaches to hand hygiene in the health care environment,” they write, “it would be a mistake to dismiss, out of hand, such a promising, intuitive, and affordable ban.”

You can read the commentary in full on the JAMA website.