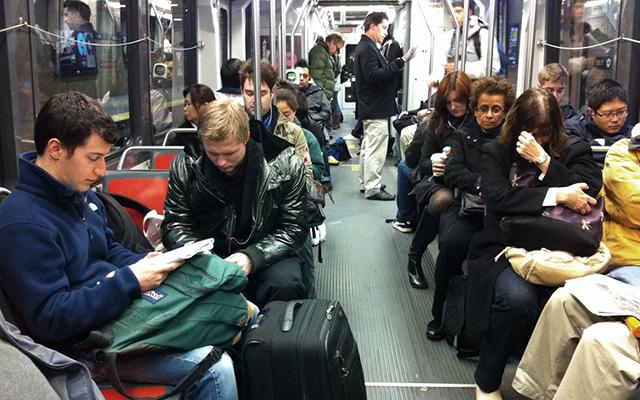 Creative Commons/davitydave
A team of researchers report that when people are at work, their levels of cortisol tend to be significantly lower than when they are home.

In her 1997 bestselling book “Time Bind,” sociologist Arlie Hochschild asserted that home life had become so stressful for many Americans that the workplace was now a refuge from home rather than the other way around.

Some research has supported that assertion. A 1994 study found, for example, that women (but not men) reported being happier at work than at home. But no study has offered objective evidence.

Until now. On Wednesday, a team of researchers led by Sara Damaske, an assistant professor of labor and employment relations at Pennsylvania State University, reported that when people are at work, their levels of cortisol — a hormone considered a biomarker for stress — tend to be significantly lower than when they are home.

The findings were announced by the Council on Contemporary Families (CCF), a non-profit group that focuses on the work-home balance issues of American families. The study itself will be published in an upcoming issue of the journal Social Science & Medicine.

For the study, Damaske and two Penn State colleagues, Joshua Smyth and Matthew Zawadzke, recruited 122 adults, aged 19 to 63 (average age: 41), using random phone calls and postings on university and other websites. Most of the participants were white (77 percent) and female (75 percent). They were all employed in Monday-to-Friday jobs, and had the weekend off. Some 40 percent had professional jobs and 48 percent had at least a four-year college degree. Slightly more than half were middle-income, earning $30,000 to $74,999 a year, while 20 percent earned less than that and 26 percent earned more. In addition, about half (52 percent) were married, and half (50 percent) had children living at home.

The study was three days long, Thursday through Saturday. The participants swabbed their saliva six times each day, and the samples were sent to a laboratory for cortisol-level analysis. The participants were also asked to complete six surveys each day. The surveys were designed to measure their mood and how they perceived their stress at that moment. Each participant was paid $120 for completing the study.

The study found that, overall, the participants had significantly lower levels of stress at work than at home, as least according to the amount of cortisol in their saliva.

These findings held for both men and women, and for all occupations, income-levels, and whether or not the participants were married or had children. But the effect was stronger for people with lower incomes and for those who had no children at home.

“These low levels of cortisol may help explain a long-standing finding that has always been hard to reconcile with the idea that work is a major source of stress: People who work have better mental and physical health than their non-working peers,” writes Damaske in a commentary on the CCF website.

Those health benefits are especially true for working mothers. “Mothers who work full time and steadily across their twenties and thirties report better mental and physical health at age 45 than mothers who work part-time, who stay at home, or who experience repeated bouts of unemployment,” Damaske says.

Damaske believes this findings suggests that “women may get more renewal from work than men.”

The study also found that, overall, stress levels were higher for both genders on work days than on non-work days. Furthermore, gender differences in self-reported stress levels tended to disappear on Saturday.

Those findings indicate “that some of the stress of home may stem from the challenges of combining home responsibilities with work responsibilities,” write Damaske and her colleagues in their paper.

The study has its limitations, of course. It’s relatively small, for example, and took place over only three days.

Still, the findings are interesting, particularly since the work-life balance is a huge and growing issue, particularly among young parents.

“Our findings suggest that telling people to quit or cut back on work in order to resolve their work-family conflicts may not be the best long-run advice,” writes Damaske in her CCF commentary. “Rather, companies should consider adopting family friendly policies that allow workers to continue getting the health benefits of employment while still being able to meet their families responsibilities.”

“One model is the ‘results only work environments,’ a policy adopted by Gap, Inc., which allows workers more flexibility in the time and place of their schedules, as long as they are getting their work done,” she adds. “Telecommuting, paid sick days, paternity and maternity leaves, are all policies that make it easier for workers to retain the health benefits of employment and for companies to retain the financial benefits of having loyal employees rather than having to deal with constant job turnover.”

You can read Damaske’s commentary on the CCF website.

Work, not home, is refuge from stress, study suggests