This is Men’s Health Week (and month, too), a national campaign whose goal — according to Minnesota’s own proclamation, signed last month by Gov. Mark Dayton — is “to help educate men and their families about the importance of positive health attitudes and preventative health practices.”

A worthy cause — that is, if moneyed interests hadn’t decided to hijack and use the idea to market their own questionable and even potentially harmful procedures and products.

“On the face of it, trying to get men who are traditionally reluctant to seek medical care into the clinic seems like a good idea. But, of course, it all depends on what is waiting for them once they get there,” write Dr. Steven Woloshin and Dr. Lisa Schwatz, internists and professors of medicine at the Dartmouth Institute for Health Policy & Clinical Practice, in an article posted Monday on the Evidently Cochrane blog, which is hosted by the Cochrane Collaboration, a nonprofit and independent network of evidence-based medical reviewers.

“Unfortunately,” they add, “the focus of Men’s Health Week isn’t clearly on evidence-based tests and treatments.”

Woloshin and Schwatz point first to the recommendation on the national Men’s Health Week website that all men over age 50 undergo annual prostate-specific antigen (PSA) screening. That advice, note the two doctors, “completely contradicts the U.S. Prevention Services Task Force which recommends against PSA-based screening for prostate cancer (Grade D recommendation) because the best evidence suggests such screening results in at most a very small reduction in prostate cancer death, no change in all cause mortality and substantial, persistent harms.”

But Woloshin and Schwatz devote most of their article to Men’s Health Week’s recommendation, made in its “Blueprint for Men’s Health,” that men, starting at age 40, ask their doctor about being screened for low testosterone.

There is no scientific evidence to support this recommendation. It’s purely a marketing ploy. 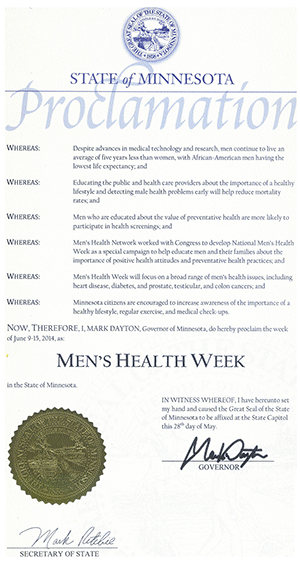 Since 2008, drug companies that manufacture testosterone replacement products have engaged in a “massive” marketing campaign aimed at “middle-aged men who have put on some weight, sometimes feel grumpy or get sleepy after meals, encouraging them to have their testosterone levels tested and to consider treatment if levels are low,” explain Woloshin and Schwartz. “It has helped persuade legions of men to take a drug that may not help and may actually do harm for a condition they probably don’t have.”

The two doctors outlined these campaign tactics in detail last year in a JAMA Internal Medicine article (which I wrote about in Second Opinion). The marketing of testosterone has been hugely successful. As Woloshin and Schwartz note in their Evidently Cochrane article, since the drug companies launched their campaign, sales of testosterone, “which had been stable for years, have risen more than 1,800%, exceeding $1.9 billion in 2012.”

And two of the companies leading the charge for more men to “talk with their doctors” about their testosterone levels are — surprise! surprise! — sponsors of the 2014 Men’s Health Week: AbbVie and Pfizer.

“AbbVie in particular has been especially aggressive about urging men to consider testing for low T with its “Is It Low T?” awareness campaign, a highly effective effort to change how doctors and the public think about managing aging in men,” note Woloshin and Schwartz.

Men need to be aware of what is — and isn’t — known in regard to using testosterone products. Write Woloshin and Schwartz:

By targeting men worried about weight, muscle tone, energy levels, mood and sexual satisfaction, the campaigns imply that treatment will help them become thinner, more muscular, more energetic, less grumpy and more sexually satisfied. But there’s a big problem: We really don’t know if diagnosing and treating “low T” does any good. More important, there is some evidence it may cause harm.

Last month, a new study of men found that older men taking the drug were more likely to have heart attacks. In early 2014 the Food and Drug Administration announced a new investigation into the possible harms of testosterone. In April 2014, the [European Medicines Agency] announced its own investigation and plans to issue an opinion on “whether their marketing authorizations for these drugs should be maintained, varied, suspended or withdrawn across the [European Union].”

As Woloshin and Schwartz note, the marketing of low T is “eerily reminiscent of another campaign: the hyper-promotion of hormone replacement for post-menopausal women. While these drugs can have an important quality-of-life benefit for women with severe menopausal symptoms, a gold-standard randomized trial showed that for most women the hormones did more harm than good.”

“For men with severe hormone deficiency from a medical problem, testosterone replacement is a major advance,” they add. “But for the aging men targeted by the low T campaign, the balance of benefits and harms is unknown. And there is good reason to worry about heart attacks, especially in men with heart disease and in the frail and elderly.”

Men’s Health Week may be a good idea, but, as Woloshin and Schwartz point out, it needs to be run by evidence-based organizations, not drug marketers.

You can read the essay on the Evidently Cochrane website.