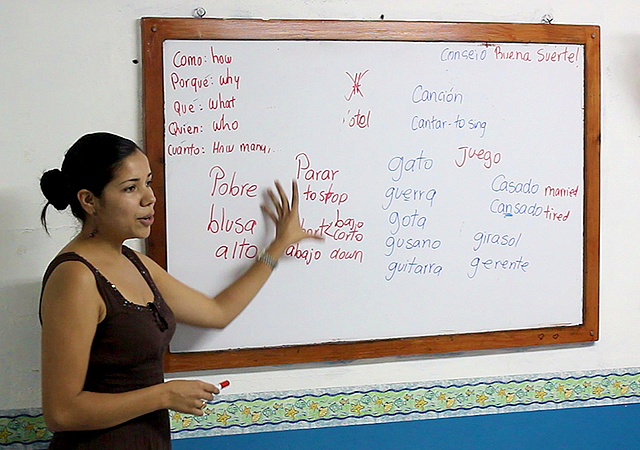 Creative Commons/The LEAF Project
An analysis of the data found that the people who spoke two languages tended to exhibit significantly stronger cognitive abilities on the tests they took in their 70s than those who were not bilingual.

Speaking two or more languages helps slow down age-related cognitive decline, even if the second language is learned in adulthood, according to a study published in the journal Annals of Neurology this week.

This isn’t the first study, of course, to report a positive association between bilingualism and enhanced cognition, including delayed dementia. (For a couple of others, see here and here.) But past studies tended to have a major limitation: They couldn’t control for the participants’ baseline intelligence. In other words, there was no way of knowing if the improved cognition among the bilingual speakers was simply because they had sharper thinking skills to begin with.

This new study, which was conducted by a team of researchers from the University of Edinburgh, was able to control for that. Its 835 participants were part of the Lothian Birth Cohort of 1936, a demographically homogenous group of native English-speakers who had been born and raised — and continued to live — in and around Edinburgh, Scotland. Each had taken an intelligence test in 1947 when they were around 11 years old. They were then retested in 2008 to 2010, when they were in their 70s. At that time, they were also given several other tests that assessed a variety of cognitive skills, including memory, vocabulary/reading abilities and verbal fluency.

An analysis of the data found that the people in the cohort who spoke two languages tended to exhibit significantly stronger cognitive abilities on the tests they took in their 70s — especially in reading, verbal fluency and general intelligence — than those who were not bilingual. Most important, however, this protective effect was shown to be independent of the participants’ baseline childhood intelligence scores.

“It is conceivable that acquisition of a second language leaves lasting cognitive traces independently of its subsequent use,” write the study’s authors. “If bilinguals automatically and unconsciously activate both languages, they constantly need to select, monitor, and suppress linguistic information, stimulating frontal executive functions [in the brain].”

Interestingly, as the study’s authors point out, the effects of bilingualism on late-in-life cognitive abilities that were observed in this study were comparable to those associated with other factors, such as physical fitness, (not) smoking and variations in the apolipoprotine E (APOE) gene (which has been linked to a greater risk for Alzheimer’s disease).

While this is the first study of its kind to control for childhood intelligence, it has other limitations. Most notably, the participants were not tested to see whether or not their second-language skills were sufficient to allow them to converse in the language. The study relies instead on the participants’ own self-reports of their language skills. Such reports can be unreliable.

In addition, few of the study’s participants learned their second language before the age of 11, a factor that means the findings may or may not be applicable to people who speak two languages from early childhood.

“However, this limitation is also a strength,” write the authors. “Millions of people across the world acquire their second language later in life: in school, university, or work, or through migration or marriage to a member of another linguistic community. Many never reach native-like perfection. For this population, our results are particularly relevant; bilingualism in its broad definition, even if acquired in adulthood, might have beneficial effects on cognition independent of [childhood intelligence].”

You can open and read the study in full on the Annals of Neurology website.