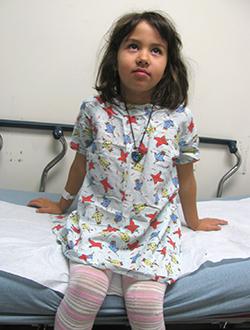 A young doctor who is doing his medical residency in the emergency room of a large, urban hospital recently told me about one of his frustrations regarding patients: Too many of them, he said, sought late-night care in the ER for minor ailments that could have been diagnosed and treated by the patient’s own doctor the following day.

A study published earlier this week helps explain why one group of patients — parents of babies and preschoolers — take their child with a mild illness to the emergency room or to an urgent care clinic rather than to the child’s pediatrician.

Without such a note, many parents face losing pay or even being fired.

“Parents may view the situation as a socioeconomic emergency, and therefore choose urgent or emergency room care over the inability to return to work,” said Dr. Andrew N. Hashikawa, an emergency physician at the University of Michigan’s C.S. Mott Children’s Hospital and the lead author of the study, in a statement released with the study. “Parents without sick leave benefits face a considerable problem when they risk loss of wages or loss of a job to stay home with a child excluded from child care.”

This is a massive problem, for an estimated 44 million U.S. workers lack any paid sick leave benefits to care for sick children.

And more than 80 percent of children in the United States under the age of 6 are in some kind of non-parental child care.

The new study is based on the responses of a nationally representative sample of 630 parents with children aged 5 years or younger. Almost 60 percent of the respondents reported needing child care for at least one child, and 84 percent said they used child care outside the home.

More than a third — 38 percent — of the respondents said that they needed a doctor’s note when their child became ill. The note was required either by the parent’s employer (if the parent intended to stay home with their child) and/or by the child care provider (to prove to the provider that the child’s illness was mild enough to permit his or her return to child care).

One-third of the respondents said they were concerned about losing their job or pay if they had to take time off from work to care for a child who was unable to attend child care.

Use of the ER and urgent care was significantly higher among parents who needed a doctor’s note, who had concerns about their work, who were single or divorced and who had annual household incomes below $60,000.

The parent’s education level and whether or not the child was covered by health insurance were not found to be statistically significant factors.

The study also found that African American parents were more likely to take an ill child to ER or urgent care. Hispanic parents were, on the other hand, less likely than African American or white parents to do so, a finding that is consistent, say the study’s authors, with other research that has shown that Hispanic parents often depend on child care provided by extended families.

Of course, as other research has shown, one of the main reasons parents take their children to emergency rooms or urgent care clinics is because their child’s pediatrician does not have extended office hours.

Many parents cannot get off from work to take their child to the doctor, so they go instead to their local hospital’s emergency room or to an urgent care clinic that is open in the evening. Indeed, studies have shown that up to 80 percent of the 25 million emergency-room visits by children each year are for non-urgent conditions.

Such use of the ER leads to increased health care costs, longer waits in the ER, and patient dissatisfaction, the current study notes.

The finding that many of those parents are in the ER or urgent care clinic because they need a doctor’s note only aggravates the problem. Yet, as Hashikawa and his colleagues explain, many of the child care providers who insist on a doctor’s visit and note before a child can return to child care are doing so contrary to guidelines by the American Academy of Pediatrics (AAP).

Those guidelines say it’s OK to send a child to day care with mild illnesses, including a cold, conjunctivitis (pink eye), a mild upset stomach or diarrhea, a mild fever, and ringworm of the scalp (a fungal infection).

As the AAP guidelines point out, these illnesses tend to be contagious long before symptoms appear, so excluding the child from day care will do little to keep the infection from spreading to other children.

Unfortunately, however, many day care settings are ill equipped to deal with even a mildly ill child.

They also point out that the emphasis of the Affordable Care Act on patient-centered medical “homes” may lead to expanded office hours by pediatricians and other primary care providers — a development that promises to help decrease unnecessary child visits to ER and urgent care clinics.

Of course, more supportive sick leave policies for parents — indeed, for all workers — would help as well.

You’ll find an abstract of the study on the Pediatrics website.