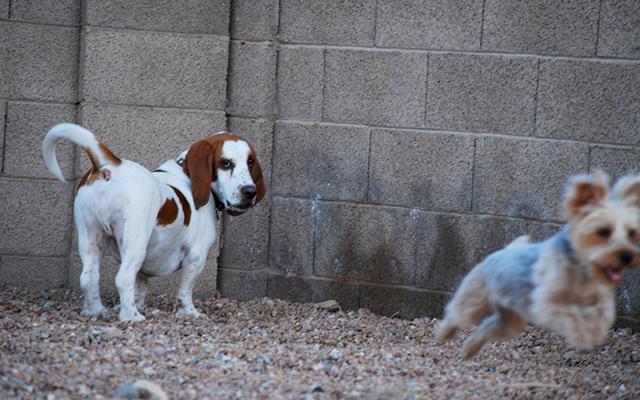 Creative Commons/lizzie1326
If the finding from the current study is true — and dogs, as well as humans, can act jealous — then the emotion is much more primordial.

Jealousy is apparently not just a human emotion. For, according to a first-of-its-kind study published Wednesday in the journal PLOS ONE, dogs, too, are capable of becoming overcome with the green-eyed monster.

Of course, that finding won’t come as much of a surprise to most dog owners.

Yet, scientists who study emotion have been arguing about the origins and function of jealousy for many years. It’s been commonly assumed that jealousy involves, and maybe even requires, complex cognitive (thinking) abilities — specifically, the ability to be self-reflective about relationships and to understand another’s emotional intentions.

But if the finding from the current study is true — and dogs, as well as humans, can act jealous — then the emotion is much more primordial. And, indeed, studies conducted on infants over the past 10 years have provided support for that idea. Children as young as six months have been found to exhibit jealous-like behaviors when their mothers interacted with what looked like another infant (a realistic-appearing doll) but not when they interacted with a non-social object (a book).

Why is research on jealousy important at all? Well, as background information in the current study points out, “jealousy is an emotion with far-reaching psychological and social consequences,” not least of which is the fact that it is “the third leading cause of non-accidental homicide across cultures.”

For this study, Christine Harris, a psychologist at the University of California, San Diego, and Caroline Prouvost, a former UCSD honors student, visited the homes of 36 dog owners. To ensure that the dogs could be easily controlled if the experiment caused the animals to become aggressive, only dogs that weighed less than 35 pounds or were shorter than 15 inches were included in the study. More than a dozen breeds were represented, and 14 of the dogs were mixed breeds. They had been with their current owners for an average of 25 months.

The dogs were videotaped under three separate conditions:

The videotapes were later viewed and coded by two independent raters for a variety of behaviors by the dogs, including aggression and attention seeking.

The study found that dogs were two or three times more likely to try to push or touch their owner when the owner was interacting with the toy dog (78 percent) than when their owner was “playing” with the jack-o-lantern (42 percent) or reading the book (22 percent). In addition, when the toy dog was in the experiment, about one-third of the dogs tried to get between it and their owner.

“Such behaviors aimed at preventing or breaking up a liaison have been hypothesized to be the primary motivational state that accompanies jealousy and that distinguishes jealousy from other emotions such as anger,” write Harris and Provoust.

The fact that the dogs displayed such actions in “somewhat impoverished social conditions leads us to predict that such behaviors would be even more enhanced in the present of an actual rival dog,” the researchers add.

Of course, as Harris and Prouvost acknowledge, there is no way of knowing for sure if the emotion the dogs were experiencing was jealousy.

Still, the findings are provocative. They suggest, write the two researchers, “that jealousy may have a primordial or core form that can be triggered without complex cognition about the self or about the meaning of the social interaction.”

In that case, they add, jealousy may have evolved not just to protect a sexual relationship from an interloper, but also to help siblings compete “for parental resources such as food, attention, care, and affection,” or perhaps to ensure that rivals do not undercut other cooperative alliances formed for survival.

You can read the study in full on the PLOS ONE website.