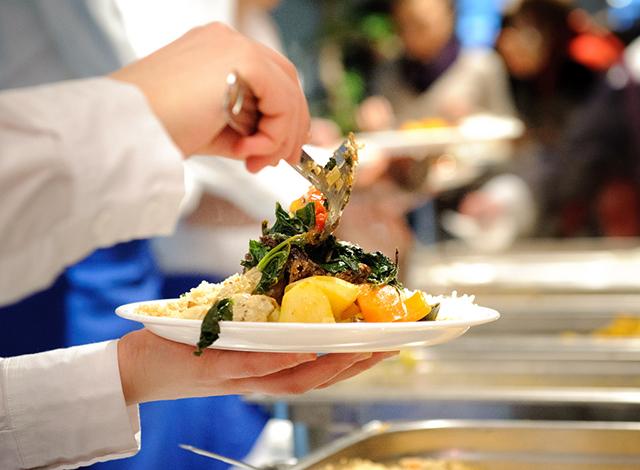 Creative Commons/Stephan Roehl
The study found that, on average, women who said they had experienced one or more stressors on the previous day burned 104 fewer calories during the seven hours after the high-fat meal than the women who reported no stressors.

Eating a meal after a stress-filled day is associated with a slowing down of the body’s metabolism — at least in middle-aged women — according to a small, randomized study published Monday in the journal Biological Psychiatry.

The metabolic slow-down was significant enough to lead to a weight gain of more than 10 pounds over the course of a year, the authors of the study concluded.

This finding supports previous epidemiological research that has uncovered a correlation between chronic stress and weight gain and obesity, as well as laboratory studies that have suggested that both depression and stressful events can alter the body’s neurochemistry in ways that lead to an accumulation of fat.

How the study was conducted

For the study, researchers at Ohio State University recruited 58 women — 38 women who were healthy breast cancer survivors and 20 other women with similar demographics. The average age of all the women was 53.

The women were brought into the lab at two different times to eat a high-fat meal consisting of 930 calories and 60 grams of fat. They were asked to fast for 12 hours, to avoid alcohol for 24 hours, and to refrain from strenuous physical activity for 48 hours before each meal.

On the days they were brought into the lab, the women filled out several questionnaires designed to assess whether they had experienced any stressful events on the previous day and whether they had a history of depression.

Seventeen of the women were found to have such a history. As for stress, 31 reported at least one stressor on the day before their visit to the lab, and 21 reported stressors at both visits. Six women said they had experienced no stressors the previous day. Most of the stressors, according to a press release that accompanies the study, involved “arguments with co-workers or spouses, disagreements with friends, trouble with children or work-related pressures.”

The women were instructed to consume the meal — eggs, turkey sausage, biscuits and gravy (the equivalent, say the study’s authors, of a Burger King Double Whopper with cheese or a McDonald’s Big Mac cheeseburger with medium French fries) — within 20 minutes. Before eating and for six to seven hours afterward, various data was collected from the women, including how much oxygen and carbon dioxide they were inhaling and exhaling — a way of measuring how much energy they were using to burn calories and fat. Measurements were also taken of the women’s blood sugar, insulin, cortisol (the so-called stress hormone), and triglyceride levels.

Because this study was double-blinded, the data was analyzed without the researchers knowing which of the women had reported stress and depression.

The study found that, on average, women who said they had experienced one or more stressors on the previous day burned 104 fewer calories during the seven hours after the high-fat meal than the women who reported no stressors.

“This difference would add up to almost 11 pounds across a year,” the study’s authors note.

Previous-day stressors were also associated with lower fat oxidation and spikes in insulin production — two factors that research has shown lead to greater storage of fat — and, thus, an increased risk of obesity.

A history of depression alone was not found to be associated with a slow-down of metabolism. But the women in the study who had a history of depression and who reported stressors the previous day tended to have higher post-meal levels of triglycerides (a type of fat found in the blood) — a response that has been associated in other research with an increased risk of heart disease.

How much sleep the participants received the night before (the average amount was 6.2 hours) and whether or not they were taking prescription medications, including antidepressants, did not alter the study’s findings.

Like all studies, this one has several limitations. It involved a small number of women, and most were breast cancer survivors, which may have affected the results — although, as the study’s authors point out, other researchers have not observed any metabolic differences between health cancer survivors and other women with similar demographics.

Also, both meals were high in fat, “so we do not know if recent stressors and past depression might have different metabolic consequences following low-fat meals,” write the study’s authors.

In addition, the study’s findings may or may not be applicable to men, who tend to have more muscle than women — a factor that affects metabolic rate.

Still, the study’s findings offer yet another good reason for keeping healthful foods around, especially when you’re under stress.

“We know we can’t always avoid stressors in our life, but one thing we can do to prepare for that is to have healthy food choices in our refrigerators and cabinets so that when those stressors come up, we can reach for something healthy rather than going to a very convenient but high-fat choice,” stated Martha Belury, a professor of nutrition at Ohio State and one of the study’s co-authors, in the press release.

You’ll find an abstract of the study on the Biological Psychiatry website.