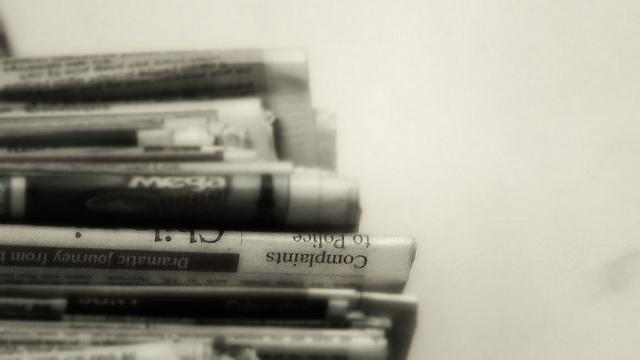 CC/Flickr/Binuri Ranasinghe
The study shows evidence of our “negativity bias” — our psychological propensity to pay attention to and remember unpleasant news.

People often complain about how the media seems to focus mostly on bad news: natural disasters, horrific accidents, nasty scandals, relentless wars and other kinds of depressing stories. And it certainly seems like we’ve had a particularly long string of such news in recent weeks.

But do we really prefer good news?

No, says British psychologist Tom Stafford in a recent Neurohacks column for BBC Future. Research has shown, he says, that we’re actually drawn to unhappy stories, without even realizing it.

As evidence, Stafford points to a study published earlier this year by Marc Trussel and Stuart Soroka, two political science researchers at McGill University in Canada:

Trussler and Soroka invited participants from their university to come to the lab for a “study of eye tracking.” The volunteers were first asked to select some stories about politics to read from a news website so that a camera could make some baseline eye-tracking measures. It was important, they were told, that they actually read the articles, so the right measurements could be prepared, but it didn’t matter what they read.

After this ‘preparation’ phase, they watched a short video (the main purpose of the experiment as far as the subjects were concerned, but it was in fact just a filler task), and then they answered questions on the kind of political news they would like to read.

The results of the experiment, as well as the stories that were read most, were somewhat depressing. Participants often chose stories with a negative tone — corruption, set-backs, hypocrisy and so on — rather than neutral or positive stories. People who were more interested in current affairs and politics were particularly likely to choose the bad news. And yet when asked, these people said they preferred good news. On average, they said that the media was too focused on negative stories [emphasis added].

Trussler and Soroka believe, says Stafford, that their study’s findings are evidence of “negativity bias” — our psychological propensity to pay attention to and remember unpleasant news. This well-established human trait may be an evolutionary protective measure (or so the theory goes) to help us become better aware of the dangers in our environment so that we can react and avoid them more quickly in the future.

But the findings also suggest, adds Stafford, that another psychological phenomenon may be involved: illusionary superiority.

“We pay attention to bad news because, on the whole, we think the world is rosier than it actually is,” Stafford explains. “When it comes to our own lives, most of us believe we’re better than average, and that, like the clichés, expect things to be all right in the end. This pleasant view of the world makes bad news all the more surprising and salient.”

In other words, we may be attracted to bad news not because of some deep, dark, pessimistic need to keep alert to danger, but because we’re optimistic about our own lives.

Whichever interpretation (or both or none) is correct, we should probably stop blaming the media for not producing more “good news.”

We wouldn’t read or watch much of it anyway.

You can read Stafford’s article on the BBC Future website. I also highly recommend his MindHacks blog.