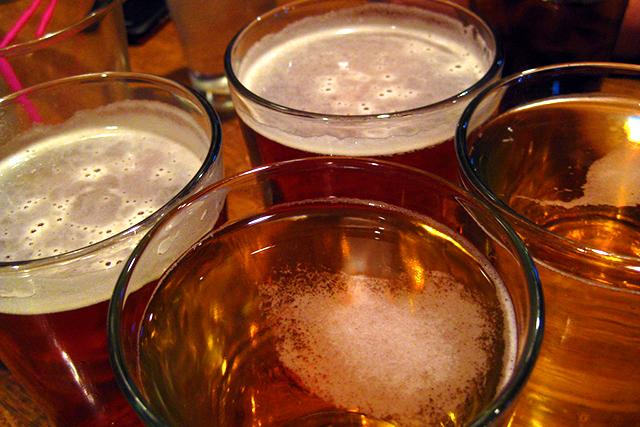 Creative Commons/Wendy
The beer, wine and liquor industry is a powerful lobby and spends a lot of money persuading politicians and the public on which policies should — and shouldn’t — be turned into law.

States have enacted a significant number of new laws aimed at reducing alcohol-related illnesses and deaths over the past decade or so, but most of that legislation tends to be ineffective, according to a study from researchers at the University of Minnesota and Boston University.

“It’s been a longstanding notion among alcohol researchers that effective policies are unpopular and popular policies are ineffective,” said Toben Nelson, the study’s lead author and an associate professor at the U of M’s School of Public Health, in a phone interview Wednesday with MinnPost. “Our findings suggest that is true.”

The study was published recently in the journal Addiction.

For the study, Nelson and his colleagues asked leading experts to use evidence-based research to rate and rank 29 different alcohol-related policies for their effectiveness. They then looked at which of these policies were most — and least — likely to have been implemented in the 50 states and the District of Columbia between the years 1999 and 2011.

“We were able to systematically document that there has been a big increase in what we might consider less effective policies, while during that same time period, the most effective policies — the ones that tend to be studied the most and that have the strongest information about whether they work or not — those policies weren’t adopted at all,” said Nelson. “In addition, existing policies weren’t strengthened. They didn’t change over time.”

Most of the new policies implemented during the time period of the study targeted underage drinking and alcohol-impaired driving — strategies that research has shown to have the weakest effect on addressing the social and health problems caused by excessive alcohol use.

But those policies are the ones that politicians — and the alcohol industry — prefer.

The inability of our elected officials to pass laws that are effective in reducing excessive alcohol consumption has serious ramifications, Nelson and his co-authors point out in their paper. Alcohol contributes to about 80,000 deaths per year in the U.S.  And its economic burden on our economy is enormous — about $223 billion annually both in direct medical costs and in indirect costs such as lost productivity and criminal justice expenditures.

“Those are pretty staggering costs,” said Nelson, “and the states absorb a lot of those in taxpayer dollars. We don’t come even close to recovering those costs in the levies we impose on alcohol.”

Effective alcohol-related strategies include raising the tax on alcohol, restricting alcohol prices at both the retail and wholesale levels, restricting the number of liquor stores and other alcohol outlets in a particular geographic area, and restricting the days and hours during which alcohol can be sold.

These policies work, said Nelson, because they help reduce access to alcohol  — and thus the problems associated with excessive drinking — across a broad population of people.

Strategies that tend not to be as effective are those aimed at specific groups, such as teenagers and drunk drivers. These include keg registration laws, ignition interlock laws for DUI offenders, and laws that impose a minimum age on people serving alcohol.

Policies aimed at educating young people about the risks of alcohol use weren’t even included in the study because research has shown they have no impact on drinking at all. “Our experts had to think that a policy was a least somewhat effective for it to be included,” Nelson explained.

Some laws aimed at youth and drunk drivers can be effective, however, including those that require graduated drivers licenses, that impose a minimum legal drinking age (21 years), that revoke drivers licenses from people found guilty of driving while over the legal alcohol limit, and that make the adult hosts of parties legally responsible for the actions of underage drinkers.

Nelson and his co-authors note that “the rise of libertarian political thinking, the consolidation for the alcohol industry and changing campaign financing laws” may have influenced the implementation of alcohol-control policies over the past decade and thus account for their study’s findings.

The beer, wine and liquor industry is a powerful lobby and spends a lot of money persuading politicians and the public on which policies should — and shouldn’t — be turned into law. In 2013, the industry spent more than $23 million on campaign contributions alone, according to the Center for Responsive Politics.

Not surprisingly, the industry lobbies against any policies that might effectively lower alcohol consumption. It’s also been quite successful at drowning out the voices of public health officials who argue for more restrictive policies.

“It’s important that the general public be aware of the significant public health burden that is created by alcohol use and for the public to also be aware that there is a pretty wide range of available policy options out there that can be adopted and that actually work,” said Nelson.

Effective policies — things like excise taxes and limiting when and where alcohol can be purchased — may inconvenience and cost the average consumer of alcohol a bit more, but those policies will reap huge social and economic savings for individual states and for the country, he added.

“It is important to be aware of the tension between public health and economic interests when considering the adoption of alcohol control policies,” they add. “Industry may try to influence both public opinion and views of legislators about the role of policy. The tension between public health goals and industrial economic interests … probably plays a significant role in the lack of adoption of the most effective policies.”

You’ll find an abstract of the study on Addiction’s website.

Effective alcohol-related bills are unpopular; ineffective ones tend to get OK’d, U study finds