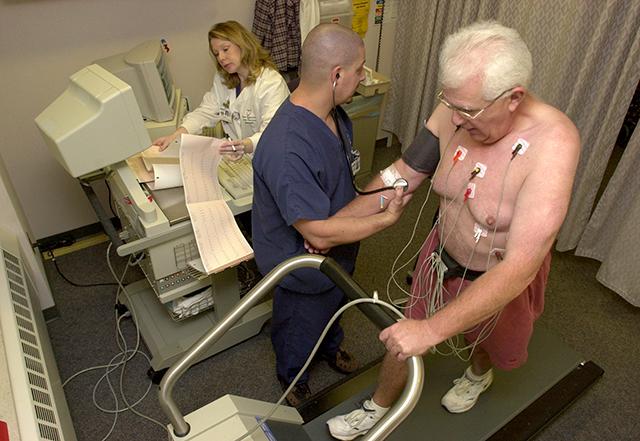 Wikimedia Commons/Blue0ctane
The inappropriate use of stress tests is frequently cited in debates about rising health care costs.

Inappropriate use of cardiac stress testing — particularly testing done with imaging — is costing the U.S. health care system more than half a billion dollars a year, according to a study published last week in the Annals of Internal Medicine.

The study also estimates that the radiation exposure associated with inappropriate cardiac stress testing with imaging leads each year to almost 500 future cases of cancer.

A stress test is done on a treadmill or stationary bike. The patient walks, runs or cycles while hooked up to machines that measure heart rate and blood pressure. When imaging is involved, a radioactive substance is usually injected into the patient’s bloodstream, first while the patient is resting and then later while he or she is exercising. The substance travels to the heart, where it illuminates the heart muscle with the aid of a special scanner that is similar to an X-ray machine. This is known as a nuclear stress test.

The inappropriate use of stress tests, particularly imaging ones, is frequently cited in debates about rising health care costs. In recent years, several professional medical associations have issued new practice guidelines that strongly recommend limiting the use of the tests. The “Choosing Wisely” campaign, for example, points out that individuals who are at low risk of heart disease, even if they have symptoms, should probably not undergo a stress test. The same is true for people with known heart disease but who are symptom-free.

For the current study, a research team led by Dr. Joseph Ladapo of New York University’s Langone Medical Center decided to investigate various factors behind the increasing use of cardiac stress testing in the United States.

The increase has been huge. Ladapo and his colleagues found that the number of cardiac stress tests performed annually in the U.S. has more than doubled during the past two decades, from 1.6 million per year in 1993-1995 to 3.8 million per year in 2008-2010.

Much of that growth can be attributed to changes in patient populations, Ladapo and his colleagues point out. The U.S. population has become increasingly older, for example, a factor that has meant greater numbers of people are at risk for heart disease.

But what can’t be explained by changing demographics is the growth of cardiac tests with imaging, which are much more expensive than the simpler treadmill test, but which studies have found don’t add much, if any, extra clinical value.  The current study found that the proportion of cardiac stress tests done with imaging — primarily nuclear stress tests — has exploded, from 49 percent in 1993-1995 to 87 percent in 2008-2010.

At least a third of those imaging tests were probably done for inappropriate reasons, say the researchers. Those unnecessary imaging tests cost $494 million annually and exposed people to radiation that could lead 491 of them to eventually develop cancer, they add.

By comparison, inappropriate cardiac stress testing without imaging cost only $7.7 million a year.

The money wasted on cardiac stress testing, both with and without imaging, is important, Ladapo and his colleagues stress, because “it reduces society’s ability to provide other health services or expand access to care for uninsured and underserved populations.”

“Nuclear imaging stress tests command higher reimbursement,” he said. “No one likes to talk about this but there is plenty of evidence that physicians respond to financial incentives.”

Perhaps an even bigger factor, however, might be “the common belief that more intensive technology equals better care, something that we are increasingly finding to not be true,” Ladapo also told Phend. “And the behaviors or practices are passed down to trainees in residency programs, so it’s a hard cycle to break.”

We also need tools for patients so that they can become better informed about when — and when not — such tests are warranted. A great place to start is with the “Choosing Wisely” information on cardiac stress tests provided by the American Academy of Family Physicians.

Unfortunately, even though the primary funders of the current reseasrch are two federal agencies, including the National Heart, Lung, and Blood Institute, the study can’t be read on the Annals of Internal Medicine’s website. It’s behind a paywall. But you’ll find the study’s abstract on the site.

Update: The study is now available in full online.