Did you ever wonder why certain works of art — say, Leonardo da Vinci’s “Mona Lisa” — are considered great? Is it because such works truly are superior to others, perhaps through their composition, perspective, form or brush strokes? Or is something else going on, some kind of psychological process that makes us collectively — and rather accidently — decide which works of art are masterpieces and which aren’t?

In an intriguing article published earlier this year in the Financial Times’ bimonthly magazine Intelligent Life, British journalist Ian Leslie (“Curious: The Desire to Know and Why Your Future Depends on It”) explains why psychology has more to do with how artistic canons become established than any intrinsically superior quality within those works of art.

One psychological mechanism at play is the “mere-exposure effect” — the phenomenon by which people tend to develop a preference for things merely because of their repeated exposure to them. This effect has been substantially demonstrated in the research literature. Writes Leslie:

In a seminal 1968 experiment, people were shown a series of abstract shapes in rapid succession. Some shapes were repeated, but because they came and went so fast, the subjects didn’t notice. When asked which of these random shapes they found most pleasing, they chose ones that, unbeknown to them, had come around more than once. Even unconscious familiarity bred affection.

James Cutting, a psychologist at Cornell University who has studied and written about the mere-exposure effect and aesthestic preferences, confirmed this study’s findings with his own experiment. Writes Leslie:

Over a lecture course he regularly showed undergraduates works of impressionism for two seconds at a time. Some of the paintings were canonical, included in art-history books. Others were lesser known but of comparable quality. These were exposed four times as often. Afterwards, the students preferred them to the canonical works, while a control group of students liked the canonical ones best. Cutting’s students had grown to like those paintings more simply because they had seen them more.

Cutting traces the formation of the canons in impressionism to half a dozen wealthy, late-19th-century collectors. 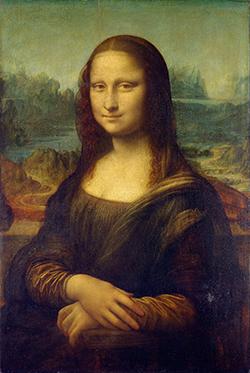 “The preferences of these men bestowed prestige on certain works, which made the works more likely to be hung in galleries and printed in anthologies,” explains Leslie. “The kudos cascaded down the years, gaining momentum from mere exposure as it did so. The more people were exposed to, say, [Pierre-Auguste Renoir’s] ‘Bal du Moulin de la Galette,’ the more they liked it, and the more they liked it, the more it appeared in books, on posters and in big exhibitions. Meanwhile, academics and critics created sophisticated justifications for its pre-eminence.”

This psychological phenomenon — when something becomes popular, it goes on to become even more popular — is known as the “cumulative advantage.”

That’s what Cutting believes happened to the “Mona Lisa.” The painting was not considered all that special until 1911, when it was stolen from the Louvre — a brash and daring theft that electrified people around the world. When the painting was recovered and returned to Paris, people suddenly lined up to see it, and its now-famous image was widely reproduced in newspapers and magazines. All that attention made the painting not only famous, but increasingly familiar — a factor that, in turn, increased its fame and eventually led to its canonization.

Effect doesn’t work on everything

Still, as Leslie points out, “a work needs a certain quality to be eligible to be swept to the top of the pile. The ‘Mona Lisa’ may not be a worthy world champion, but it was in the Louvre in the first place, and not by accident.”

In addition, he says, “some stuff is simply better than other stuff. Read ‘Hamlet’ after reading even the greatest of Shakespeare’s contemporaries, and the difference may strike you as unarguable.”

Indeed, research supports this notion that the mere-exposure effect doesn’t work on everything. Writes Leslie:

A study in the British Journal of Aesthetics … points to a different conclusion about how canons are formed. Building on Cutting’s experiment, the researchers [of a study in the British Journal of Aesthetics] repeatedly exposed two groups of students to works by two painters, the British pre-Raphaelite John Everett Millais and the American populist Thomas Kinkade. Kinkade’s garish country scenes are the epitome of kitsch — the gold standard for bad art. The researchers found that their subjects grew to like Millais more, as you might expect, given the mere-exposure effect. But they liked Kinkade less. Over time, exposure favours the greater artist.”

You can read Leslie’s article on the Intelligent Life’s website.

Correction: An earlier version of this story had the wrong date for when the “Mona Lisa” was stolen from the Louvre.

How psychology helps canonize the ‘Mona Lisa’ and other artwork