Will the Disneyland measles outbreak — which started earlier this month and has now spread from California to six other states and Mexico — be a turning point in the anti-vaccine movement?

Will parents who have been unnecessarily fearful of vaccines finally come to understand that measles and other childhood diseases for which there are vaccines can be highly contagious and potentially dangerous for their children (and others)?

I certainly hope so. But I’m not holding my breath. I already noticed over the weekend a flurry of social media postings by vaccine-deniers that charge public health officials and the media with overblowing the potential harm that measles can cause.

Those messages are laughable, for they are an obvious distortion of historical and scientific facts. But this is not a laughing matter. Last year was the worst year for measles since the disease was declared eliminated in the United States (in other words, no longer native to the country) in 2000. Twenty-seven states (including Minnesota) reported a total of 644 cases of measles in 2014.

The majority of those cases involved people who had not been vaccinated. 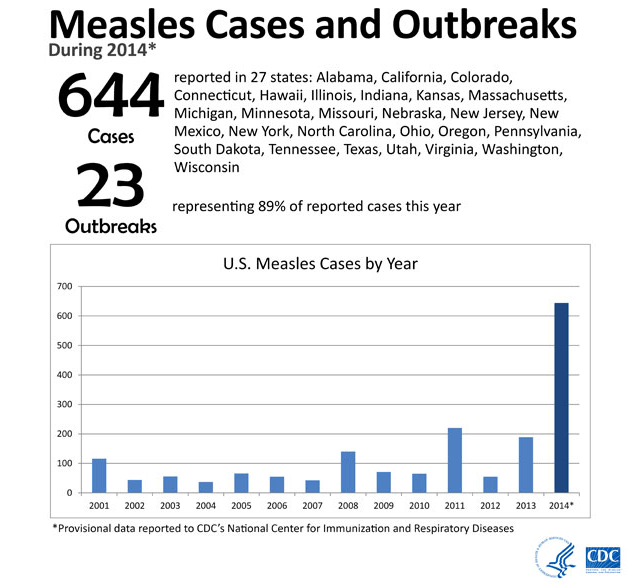 And 2015 is already getting off to a bad start — and not just because of the Disneyland oubreak (which has infected, as of Monday, 73 children and adults in California alone). In late December, for example, Minnesota’s neighbor to the west, South Dakota, reported its first measles case in 17 years.  To date, 12 additional cases had been reported in that state — all in an extended family that had not been vaccinated.

Measles is a highly infectious respiratory disease. In fact, it’s one of the most contagious viral diseases known.

In an article published last Friday in Slate, Tara Smith, an associate professor of epidemiology at Kent State University who studies infectious diseases, makes a gallant attempt to explain why it’s wrong to dismiss the dangers of measles.

Not only does she carefully explain why “measles is horrible,” but also why the arguments made by people like Dr. Bob Sears, a Southern California pediatrician with strong ties to the anti-vaccine movement, are just plain wrong in minimizing the disease’s effects on populations and on individuals.

Before the vaccine, the United States saw approximately 4 million cases of measles each year and 400 to 500 deaths. These are the stats that vaccine-deniers tend to emphasize — a relatively low number of deaths compared with the number of infections. However, those statistics alone leave out a big part of measles infections. Prevaccine, almost 48,000 people were also hospitalized each year because of measles and measles complications. One in 20 of those infected developed pneumonia. More rarely but more seriously, each year 1,000 became chronically disabled due to measles encephalitis.

Sears and others in the anti-vaccine movement also like to claim that better sanitation and nutrition, not immunization efforts, are why measles and other childhood diseases have declined so dramatically in the United States.

Not so fast, says Smith:

What many forget is that we had a massive outbreak of measles in the United States from 1989–1991. While our 644 cases in 2014 seems high compared with recent years, 25 years ago measles incidence spiked to 18,000 cases per year, with a total of more than 55,000 infections before the outbreak began to dwindle. It was the largest measles outbreak in this country since the 1970s.

It’s hard to argue that in 1989 we had problems with modern sanitation. Arguably, we were healthier 25 years ago than we are now, if one uses the U.S. obesity rates as one marker of health and good nutrition. We had antibiotics for secondary infections, such as pneumonia, that settle in to measles-infected lungs — and fewer antibiotic-resistant bacterial pathogens than we do in 2015. Measles-associated pneumonia isn’t easy to treat if it’s caused by a “superbug,” and we’ve not had to deal with a huge measles outbreak in the age of methicillin-resistant Staphylococcus aureus, or MRSA, and other drug-resistant bacteria.

Despite our advances and our modernity and our status as a developed country, we still saw 123 measles deaths during this epidemic — here, in the United States, where we get plenty of Vitamin A. [Vitamin A deficiency is considered a risk factor for measles.] There were also 11,000 hospitalizations — fully one-fifth of people infected with measles became sick enough to be hospitalized.

Vaccine-deniers engage in a lot of wishful thinking and go to great lengths to twist the history and science surrounding measles and other childhood diseases. But that will not keep their children safe from these serious illnesses, as Smith points out:

Nutrition and sanitation are no panacea for measles and no substitute for measles vaccination. Living in the United States does not magically protect you from dying from measles or other infectious diseases. Being generally healthy alone is not a guarantee that you won’t end up hospitalized from a measles infection. Your best defense against measles is an up-to-date MMR vaccine for yourself and your family, checking to see that you live in a neighborhood and school system where others are likewise vaccinated, and spreading the word that vaccines are safe and life-saving. The best way to respect measles is to acknowledge its potential to cause serious illness.

Perhaps the Disneyland outbreak is helping to get that message across to those pockets of parents who have been living in denial. And perhaps, as some young parents who do immunize their children have told me, the anti-vaccine movement is on the wane.

Let’s hope so — for all our children’s sake.

You can read Smith’s entire essay on Slate’s website.

Will Disneyland’s measles outbreak set back the anti-vaccine movement?